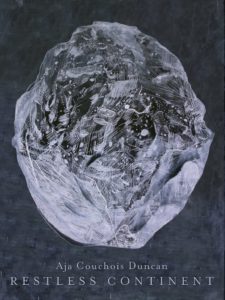 In her “Notes on Nomenclature” Aja Couchois Duncan calls herself a “writer of apposition”; that is, a writer concerned with placing things side by side as opposed to one who adheres to hierarchies and exclusions. This care is present throughout Restless Continent, a debut collection that grapples with recuperation, inheritance, and quests for wholeness. If you belong to a legacy of rupture and severance, how to relate to the philosophical inquiry: where do I begin and where do I end? Whose definition of ‘end’ and ‘beginning’ are you being measured up against?

Before the end eclipsed the beginning, there was infinite thread. No one could say where it began and where it ended. No one tied themselves up in little knots. . . . Is the story the same without the thread of history? I would ask you, but your past has erased your present.

Duncan reconfigures the North American continent into a porous poetical landscape, draining out white patriarchal narratives of discovery, manifest destiny, modernity, and enlightenment in order to give body and voice to the seemingly vanished, illegible, erased, destroyed. Through lush imagery and prismatic gestures, the text reminds us “the earth as mother is a tragedy of subjugation and resistance,” a place “bear[ing] the brunt of” containment, contamination, and innumerable other violations. Duncan traces how this violence trickles down to disrupt relations between land, plants, animals, humans, language, self.

The text is divided into nine sequences, featuring a mix of free verse and prose poetry. As readers we move with the speaker from inchoate existence (“Emerging from the Muck”) to a development of a recombinant speech and awareness (“Nomenclature, Miigaadiwin, A Forked Tongue”), to a negotiation of one’s place within taxonomical systems (“A New Order Of”), to a reckoning with what passes down (“Inheritance”), before a culminating return to what has come before (“In Situ”). In between, Duncan intersperses “Worst Case” scenarios for each of the four elements. These poems address a you during moments of calamity and ruin – poems as instructions towards survival. Not all the poems deal specifically in disaster. “Worst Case: Earth” abounds in images of alder trees trilling, moons brought to fullness by coyote howls, sound as threads through uncertainty. It urges you to sing “a healing song” to trees “far from home.” Boundaries are blurred, sight proves to be not the only way to see.

How does our relationship to land change if we view all its inhabitants as a reflection of our interdependence? If we learn from the exile felt by trees, the alternative knowledges heard by bats, rather than seeing these gestures as insignificant or inferior? While acknowledging the need to commune with forces beyond us, Duncan concurrently disassembles white fantasies around the figure of the “American Indian” – myths such as the noble savage, which was popularized by writers James Fenimore Cooper and Washington Irving, amongst others. This depiction overemphasized indigenous peoples’ connection to the earth, romanticizing it to the point that they were imagined as folded into the scenery, an outgrowth of the landscape. Implicit in this reading is the belief that North American land properly “belonged” to Euro-American colonizers and settlers. Indigenous communities were made to disappear – one thinks of Edward S. Curtis’ photography project, “The Vanishing Race” – through means of aggression, theft, displacement, and assimilation. Duncan’s collection challenges these myths by refusing to excessively simplify our ecological legacies and possibilities. Her text investigates the myriad meanings of land, from geological to metaphorical to intimate. The speaker, a person split between Ojibwe and European lineages, is uninterested in narratives that paint the colonization of the North American continent as a sentimental tale of innocence lost and civilization found. How would the earth remember? In the face of so much erosion, Duncan traces and retraces a visioning of a land that lives, breathes, disturbs; that simultaneously parallels and complicates our relationships to body, memory, and consciousness.

The longest sequence, “Nomenclature, Miigaadiwin, A Forked Tongue,” borrows the form of a dictionary. Duncan re-imagines her own solitary recovery of the Ojibwe language through alphabetical prose poems that entwine Ojibwe and English, history and mythology, personal and ancestral, land and psyche. The pages throb a hunger. What rises to the surface most frequently is a burning desire to reclaim origins in a manner that avoids disregarding the ghosts and hauntings of the present. To do this the speaker must reencounter “the dismembered pieces,” a repeating world of severances and denial:

To be american is to be gichi-mookomaan, a country of. Such isolate objects. For      five hundred years, there were generations whose sole purpose was to split and swallow. They broke the continent into states, into fragments of.

How can states also be understood as silent wounds, scars? In Ojibwe, the word for white person and/or American is the same as the word for butcher knife: gichi-mookomaan. The European colonization of the land and indigenous communities is revealed to be not a tale of expansion and adventure but rather a narrative of invasion, misinterpretation, and othering. The butcher knife is a potent image, an instrument “cleaving muscle from earth, its bone,” one signaling a history of exclusion and separation:

The English claimed only their mirror image. Later the science of alterity would explain such predilections.

Othering resembles the slice of a blade, cutting threads of collaboration and generative exchange. Language takes on this quality when used as a way to classify, subordinate, and diminish. In “Distaff” the speaker envisions an encounter between the Germanic influences of English, calling “the residual Hans” and Maude, who is Anishinaabemowin, which translates to Ojibwe language. The speaker takes her place at a spinning wheel but Hans’ “fingers thread the yarn” – he is an interfering force:

When Maud wakes she finds Hans with blood-stained fingers. She washes the stains from his niibinaakwanininjiin, those fragile cups.

“Distaff” reads as a wry fable wherein Duncan strips English of its supposed neutrality. The image of Hans bloody threading rewrites English as a prescriptive instrument of colonial violence and control. If “[l]anguage calls the world into being,” the text hungers for a vocabulary that holds space for contradictions, regeneration, mysteries, empathic listening, porosity. A language that lives, in constant motion, as opposed to one that boasts a sterile hostility. Is the reencountering of Ojibwe language akin to Maud cleaning the stains from Hans’ palms? A way to recast all the muck and taint? The speaker sits with “a book of two tongues,” determined to uncover meaning beyond “a life without footprints,” which allows nothing but pain, trauma, and disconnection. The text’s gestures bring to mind this quote from writer and poet Deborah A. Miranda:

If we allow the pieces of our culture to lie scattered in the dust of history, trampled on by racism and grief, then yes, we are irreparably damaged. But if we pick up the pieces and use them in new ways that honor their integrity, their colors, textures, stories – then we do those pieces justice, no matter how sharp they are, no matter how much handling them slices our fingers and makes us bleed.

If language is all she has, “[a] tenuous transmission of,” the speaker will nonetheless thread “an igneous” speech turning away from the diminishing butcher knife. In moments of uncertainty and confusion, the speaker looks to the earth. Not to find definitive answers, per se, but as a source of kindred support, poems for survival. In addition to colonial disturbances, there have been severances of an ecological kind – the text repeatedly cites our move from sea to land as one such break: “You are all wetness, some tearing of” for “we have switched our alliance / made family out of desert” – does the sea long for our return? Is the womb our last remembrance of our watery origins? How to achieve wholeness within all this restlessness? As the text progresses, wholeness becomes unhinged, a pivot in which to explore and empty out conceptions of identity and community especially when intersected with issues of environment and communion.

Restless Continent urges a reconnection with Spirit – whether that be ancestors, Sky, (re)imagination, writing, the unintelligible depths of self, an inquisitive hunger, or some merging of all and more. The text’s movements recall Ana Mendiata’s Siluetas series. In similar ways these embodied words press themselves against mud, tree, grass, fire, sand, leaving a palimpsest of contact and submersion. Where do you end and the earth begin? Who is the self when drained of language – what remains? In the face of so much unknowing, the text can only remind:

The world has been renamed before. It has caused humans a great deal of suffering. But Sky understands. Humans depend on language. Sky depends on nothing at all.