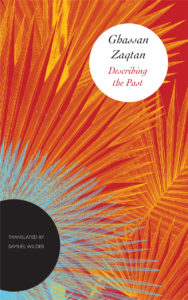 “I am compelled to speak now. You know the necessity of it here. Things evaporate and die if they don’t find someone to remember them.” Take these lines, simple as they may seem, as a definition of the novel. They appear, a characteristically fleeting paragraph, early in Ghassan Zaqtan’s 1995 novella Describing the Past, the first prose work to appear in English by the great Palestinian poet, titled with this delicate, deliberate flatness. What novel, after all, could not be well named Describing the Past? (“If the true subject of the novel is time,” I remember a teacher once saying off-handedly; I don’t recall what clause followed, or have yet to decide what clause should.) Zaqtan’s narrative enacts the fluidity and intimacy of dream, yet bears the full weight of memory.

The setting is the Karameh refugee camp in Jordan, where Zaqtan lived as a child — his family’s second displacement and relocation, as Fady Joudah’s foreword informs us — and later site of the 1968 Battle of Karameh, in which Israeli forces destroyed the camp. Three narrators — “I,” “he,” and “she,” two young men and a young woman in Karameh — divide the novella, their short sections moving through time and across subjectivities not freely but with the transformative force of loss. To call the novella haunting would be insufficient. The prose has a rare, fugitive quality: a narration that seems to envy the air, envy the breath of the other, and which knows in contrast its own confinement.

“I am compelled to speak now”: it is this “now” that slips away from the reader, draws us into pursuit. When is the “now” of this or any novel, when could “now” be said to occur? A novel is a bridge to the past — a process of recollection; a present (that has passed) from which a voice may speak of what is past — but here the far banks of the river are mist, groundless: the bridge can’t end. “Now” is the already vanishing time of the story’s telling, description an artifact of the past’s violation of the present, or vice versa. The novella’s “I” (sometimes, “the Christian”) and “he” (sometimes, “the Iraqi’s son”) desire the same woman (“she”), who is married to an older man, the Hadj, her mother living with them in the Hadj’s home. In time, her mother dies; the Hadj dies; later, “he” drowns, after he and she have married and had a child.

One could call the narration of these events nonlinear, but that would reduce the complexity of Zaqtan’s rendering of time, in which no story may begin without beginning the story of its own end. The long days of childhood, the first impulse of desire, the moment of death — these beginnings and endings are implicated in one another, each present as the other arrives. It’s as if the past may become distinct only in the presence of “you,” the reader, the one to whom “I am compelled to speak.” In the reader’s presence, “before” and “after” may be distinguished from one another for a moment, before blurring back into a present constituted by memory. Note how, just after we learn of the friend’s (“his”) drowning, the linearity of time is undone into elegy, in a moment offered finally to the reader: “Before we weep for him together, she and I. Before I weep for him there, alone. Before I weep for her and him as she sleeps. Before you weep for both of us, for him and me.”

To consider the presence of the reader means stepping, of course, momentarily outside the book. The publication of this novella should be commended both for its role in the translation of Zaqtan’s oeuvre into English and as the first title in a new series for Arabic literature at Seagull Books, edited by the scholar and translator Hosam Aboul-Ela. One volume of Zaqtan’s poetry, Like a Straw Bird It Follows Me, has appeared in English (from Yale University Press’s series the Margellos World Republic of Letters), in Joudah’s superb translation, awarded the Griffin Poetry Prize in 2013. A second volume, The Silence that Remains, also in Joudah’s translation, is forthcoming from Copper Canyon Press. Thus the anglophone reader of Describing the Past can consider, for example, the singular sense of movement and intricate use of space in Zaqtan’s prose alongside an increasing wealth of decades of his poetry: “a world… of liminality made permanent, where all letters go unmailed and all stories remain unfinished,” as Ben Ehrenreich has written, where “homecoming brings no end to exile; the dead refuse to rest.” Samuel Wilder’s translation (I should note that I do not read Arabic) strikes a dynamic balance between limpidity and flickers of opacity. In Wilder’s English, Zaqtan’s images are vital and distinctively restless; the prose has a bold simplicity that never settles into familiarity. Note, for example, the rhythm of deferral through which this image constructs itself and offers, from one clause to the next, the multiple perspectives of witnessing, being witnessed, passing by, and the presence of death that is unlikely companion to a smile: “At the thresholds of houses, on the low walls, on irrigation works and pools, the dead sat quietly, smiling under the weight of their dust and staring as my small demonstration passed by.”

Images such as this illustrate the elusiveness of the “here” in the second sentence I quoted above, “You know the necessity of it here.” Zaqtan’s “here” is a place that cannot finally locate itself; “here” is suffused with space and motion, possessed by air, unsettled. I don’t know that I’ve ever read a work of fiction in which space was so nearly a character. Throughout, a particular distinction arises between the space of the house and that of the river’s edge (Karameh is just across the Jordan River, opposite the West Bank), each with their own power, to which characters may be subject. The house is in a soon to be destroyed camp, the river a border armies and refugees cross; perhaps both fail, if differently, to constitute spaces in which one may live. A character “pass[es] through the empty space before the door . . .  then vanish[es] completely as if the first touch of the house air had dissolved her.” Scents are physical presences, exerting force — the mere scent of basil may “[cordon] the corner off from the rest of the place.” A character passes “along the edge of death . . .  as he had passed beside life,” and “a narrow passage seemed to open in the air to let him through.” Waves of sound are palpable and even have agency, moving “with caution and control, as if afraid to reach my body and wound it, to set death flowing down my clothes and spilling onto the street.” Stories are haunted by space: “there were wide and painful, overlapping gaps in the story.”

In one striking passage, “he” listens as “I” narrates a memory, and we witness an image transform itself across and within space. The two friends are walking toward the banks of the river — a location made tangible by the intangible, by light, scent, air, sound: “the scent of wet mud and ground shadows grew dark and more intense as it became hard to walk through the thickening air. The sound of the fast river running through cut the place off completely . . . ” “I” begins a story that is a description: of watching “her” as she sleeps. Listening, the friend pictures the image and claims it for himself: “I saw her in his voice with a clarity that did not exist for him; she was clearer and more complete in his voice than anything he had looked at or beheld.” His desire is born through the description that is the embodiment of the other’s desire — “I never paid attention to her before that,” he says, until hearing his friend: “as he spoke, he saw her and touched her with his voice. The voice is the scandalized and bewildered realization of a thing. The tone describes and grants and draws”; “in his voice, I loved her . . . ” As he listens he transports her image from within the house to the “river’s edge,” “and she stays there, suspended in the air, between his voice and the surface of the river, described as a woman like her must be described.” Through this act of telling and listening, this delayed and shadowy signification, the listener has a sudden, clear access to the signified that the one undertaking the labor of description does not have. She arrives to him, described, and “stays there.”

And this novella, in turn “stays there” — stays here? — with the reader. That we cannot secure ourselves within the novella’s webs of chronology and identity only increases the mesmerizing power of the prose, how potently “the tone describes and grants and draws.” “Things evaporate and die if they don’t find someone to remember them”: this was the third of the sentences I emphasized above, and serves to describe the workings of the novella from within and from without, as the reader becomes the one who is asked to bear witness, to remember these stories and the story of their telling. And I do not mean to elide that these stories are Palestinian, as is the loss they both recall and presage. This novella won’t cease testing the dream that is memory, the hope that memory may yet salvage the past. The image of the woman endures, but endures only “suspended in the air,” as if on the verge of evaporating; and the one to whom this image had come to belong is already gone, drowned in this very river.

Thus this slim work of prose finds us, its new readers, and offers both description and loss, both “vision” and the “dense line of darkness” that “advance[s]… like a great edge, a boundary to every thing.” It offers not only the vivid “things” of the past but an original experience of what it is to remember — the motion of light and shadow in which these lives glimpse one another and are briefly seen. Later in the novella, “I” will claim: “I had become completely light. Things kept changing. I was able to break through the familiar and go past it.” Zaqtan pursues the movement of breath through the narrow spaces of memory, finely voicing the ways in which “now” and “here” are both lost and yet to arrive, ever beginning and ending their own stories. Listening, we too may for a moment “break through the familiar,” accompanying this remarkable book both “along the edge of death” and “beside life.”