I Hate the Internet – Jarett Kobek 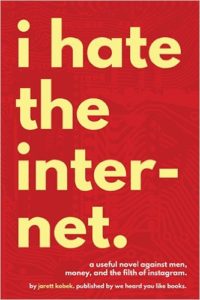 Just three pages into his book I Hate the Internet, Jarett Kobek proclaims that “This is a bad novel.” From a certain perspective, I Hate the Internet really is bad. Numerous aspects of the book seem to pervert what we think of as “good writing”: its repetitiousness, its rudderless story, its superficial characterization. Kobek’s reason for writing what to all appearances is a calculatedly “bad” novel is that “The writer of this novel gave up trying to write good novels when he realized that the good novel, as an idea, was created by the Central Intelligence Agency.” He seems to be referring to Cold War initiatives like the Congress for Cultural Freedom, which funded literary institutions like Paris Review to create the impression that the United States, in contrast to the Soviet Union, was an intellectually vibrant place at the forefront of international cultural debates. It also used these organs to promulgate postwar literary fiction and its central assumption, convenient for the purposes of the way of life that the CIA was then trying to propagate: that the world only extends as far as our dalliances and whatever inchoate feelings they induce in us.

Yet precisely because of its narrow focus on the vicissitudes of sexual intercourse among college-educated Americans, Kobek argues that it proved difficult for this form of middlebrow realism to adapt to and represent subsequent historical shifts, especially the rise of the internet. The various discourses that the internet enabled began to eclipse literary writing, which anyway was only ever intended for a few initiates whose educations had provided them with the right instruments of symbolic appropriation. Kobek contends that there is only one way out of this impasse: “The only solution was to write bad novels that mimicked the computer network in its irrelevant and jagged presentation of content.”

So can the novel, in some ways an obsolescent form of technology in itself, both encompass and critique the internet’s speed and superficiality while avoiding the exclusivity of literary writing? Kobek tries. In apparent emulation of the joylessly compulsive clicking involved in using the internet, the book flits desultorily among different narrative strands. The plot concerns various people whose lives are upended by “the internet,” a term generally used in the book to mean “Web 2.0”-era social media sites like Youtube and Twitter (apps and the “sharing economy” figure less prominently). Set mostly in San Francisco in 2013, I Hate the Internet dispenses with the increasingly anachronistic but still pervasive fictional trope of the American city as a site of creative and personal self-realization. Instead, it focuses on the dispossession created by the tech boom, both locally in the Bay Area and in a wider sense. J. Karacehennem, a writer from Los Angeles, moves to the Mission district only to find himself caught in the tumult over its gentrification. A transgender woman, Christine, fears being faced with an Ellis Act eviction. Adeline, a middle-aged graphic novelist, is surreptitiously filmed making critical remarks about women in tech and Beyoncé; when the video is uploaded, it is met with outrage. Ellen, a recent college graduate, has her life ruined when a video of her having sex with her high school boyfriend is posted online.

In contrast to the pernicious individualism of middlebrow realism, the interior lives of these characters are generally treated as secondary. The novel’s main focus is constructing, through short paragraphs comprised of baldly declarative sentences, a digressive, fascinating, and wholly unsystematic account of the depredations of twenty-first century life. This analysis is as determinedly crude as the novel’s proclaimed “badness” promises. Eschewing literary conceit (he says that “When someone suggested that a narrative was allegorical . . . they meant that a narrative’s ill thought-out structure possessed a secret meaning”), Kobek’s prose is as anaphoric and relentlessly definitional as an explainer article: we learn, for example, that Amazon is “an unprofitable website dedicated to the destruction of the publishing industry,” and that “Automobiles were mechanized vehicles which transported human beings from one point to another while destroying the atmosphere and the planet.” These definitions purport to an Olympian perspective that transcends the obfuscatory, triumphalist language of the “knowledge economy” to show the way things really are, and above all what the internet really is: “The intellectual feudalism produced by technological innovation arriving in the disguise of culture.” Kobek repeatedly invokes the idea, which everyone will have encountered in some form or another, that social media companies turn their users into unpaid generators of content; whatever connection or “freedom of expression” they promise, from a material standpoint participation mostly enriches these organizations. The mood from this vantage point is by turns scornful, at times lapsing into a generalized misanthropy (“many people considered the human species to be a bunch of dumb assholes”), and melancholic (“The whole world was on a script of loss and people only received their pages moments before they read their lines”). But can a fulmination against the internet like this one, which comes from outside its confines, ever hope to be heard, or would such an effort only ever be futile and self-marginalizing?

The best parts of the book trace the strange genealogy of the internet. Midway through the book J. Karacehennem says that “I have a theory . . . that all money and technology is embedded with the ideology of its origin.” Much of I Hate the Internet is given over to excavating this ideology. It teems with references to comic books, science fiction, free-market utopias like Spaceport America and Ephemerisle, and objectivist philosophy — elements that make up the form of consciousness that expresses itself in comments pages everywhere, but which have mostly escaped the attention of novelists and their focus on certain class-bound structures of feeling — out of which it constructs a compelling counterhistory of the internet. The link Kobek suggests between the adolescent fantasies of male self-empowerment sold by juvenile literature (not to mention books like Atlas Shrugged) and twenty-first century startup culture, with its presiding fantasy of a heroic cadre of mostly male technicians “changing the world” through some app or another, pursuing “innovation” for its own sake regardless of the social consequences, is compelling. More interesting still is a seemingly incongruous thread running through the book about the life of Jack Kirby, who created the Fantastic Four, Iron Man, the X-Men, among others, and about whom Kobek says that “despite never appearing as a character in its pages, Jack Kirby is the central personage of this novel.” One of Kobek’s main insights is that the social media business model has its analogue in comic book companies of the mid-twentieth century. He details how publishers like Marvel would hire artists under work-for-hire agreements, under which the artists were paid a small sum in exchange for the rights to their work. As a result, publishers have been able to capitalize on these intellectual properties through ceaseless franchise “reboots,” while artists like Kirby died penniless. It’s easy to see the comparison with social media companies, which, as Kobek repeatedly reminds us, own and profit from every utterance that passes through their sites.

Thus I Hate the Internet relentlessly underscores one of the great tragedies of our time: that the channels of public debate have been privatized. We can inveigh against this state of affairs as much as we want, but to make our grievances visible they will have to be routed through these privately owned platforms, thereby creating profits that are not shared with us. This book, a paperback novel published by a small press that features several typos, sits outside this circuit of communication, but at what cost? In a way, the loneliness of such a gesture only proves the triumph of the internet, on which the book will anyway depend to ensure that anyone reads it at all.