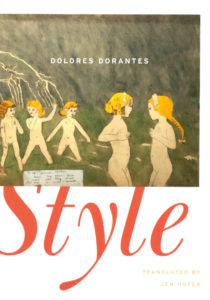 How does the cover image prepare one for the ruptures and reversals of Dolores Dorantes’ Estilo/Style? The Henry Darger painting depicts young girls making their way through storming waters. Two girls in the foreground seem to be lost in a game of mimicry while others in the background seem overcome by uncertainty, fear, awe. Jagged lightening flashes across an overcast sky. Has there been a disaster? The back cover mirrors the front but contains an unsettling surprise. A statue of a uniformed figure falls from the left, suspended in a brutal struggle with a young girl who curls beneath him, her tongue stuck out. Is he choking her? Is she mocking him? How to understand this nightmarish vision?

Estilo/Style is a prose poem told in three parts – italicized sections preface a cluster of numbered narrative chunks. It begins with #6 and ends on #29 before swooping back to include #1-4. There is no 5. Some numbers repeat. The italicized sections feature specific uses of the word style, including from botany (in a flower, an extension of its ovary, bearing the stigma) and Dorantes’ own personal sense (a patient, ever extending search for yourself). The botany definition opens the book; it is paired with style as a basic mode of expression. Reading the two meanings, one following the other, produces certain effects. In a flower, the style is a prolongation of its ovary but is not the ovary itself for it does not contain ovules. In keeping the meanings cleaved together, how can a mode of expression be an extension of, but fail to be expression itself? How to characterize this space of tension – of being and not being?

#6 begins with images of branches tearing at the “interminable skin of the sky”, which quickly shifts to encompass “us”:

Of us all you have is shreds of sky, fervor. We are shreds. Live parts of a tree.

Estilo/Style is narrated by an inexhaustible feminine plural voice, as signaled by the appearance of nosotras. They speak to an unknown “you,” whose identity morphs just as haphazardly. Is you their teacher, their owner, their master, their president, their lover, their employer, their torturer, the reader? You is all of the above, none, and more.

We are yours. For your will and we want what belongs to us. We’re moving along, arranging ourselves there. Heating it up there. We run like blood runs and lobelias of fear. We enter like cool air. We place ourselves tidily, like soldiers or jewels.

The narrative pivots around a few recurring images and actions, creating a dizzying sense of compulsion, accumulation, and ensnaring: clustering flowers, tongues, masks, kissing, leash, codes, visits to your bed. This furious chorus inhabits the skies, dons “your mask of perfect presidency,” yet belongs to no place. They ask you to bind their mouths, to arm them with weapons, to receive their blows. They wish to destroy markers of the state: offices, factories, schools. Throughout, you remain choked in their never-ending web of rabid pursuit:

In her reflection on translating Estilo/Style, Jen Hofer discusses how Dorantes’ use of the word “minas” ripples and bends in ways that English cannot quite capture. Minas means mines, as in sites of mineral extraction and sites of military explosion, respectively. Mina is also a slang term for girls. In blending and rubbing definitions, Dorantes creates jarring resonances that echo in disturbing ways. Girls (including those who are feminized) are exploding – from pain, rage, exhaustion, death; they are sites of constant violation and exploitation. Like mines, the text’s unrelenting force remains hidden; they cannot be found other than “in the unexpected passageways of the mind,” anticipating. They contain, intertwine, and subvert (seemingly) contradictory impulses: war, shelter, domination, submissiveness, desire, hate, victim, aggressor, belonging, placelessness.

Binaries trap understanding at the surface. Here, dualistic thinking is replaced by a meditation on intersections – Dorantes points us to a place that holds simultaneous, conflicting energies. The text oscillates between demands, requests and the uncomfortable/subtextual/potential comminglings between. “May your gusts of birds pass over us” returns as “Tie us up, put a leash on us. Command us to lie down and show me your tongues: a gust of birds” which reassembles to “Starting tonight it will always be night and you may never leave this bed: long gusts of birds and a presidency. We arrive.”

Through repetition, Dorantes breaks and rearranges language by emphasizing its elasticity and ambiguity. “Gust of birds” embodies an action, an essence, an effect, a warning, a negation. Its meaning is unstable, vibrating, (un)creating itself before our very eyes. In her text, language uproots, mutates, reinitiates, refuses. This phrase occurs often, a haunting refrain: Este libro no existe. What to do with a book that insists on its own unbeing?

This book does not exist. All that has been said in the name of a love that does not last. Each line dispossessed. The drug that seeing blood has become.

The book does not exist, “[i]t is a walking organism,” passing through and disrupting our understanding of how we might move, speak, make, and do. Dorantes is especially interested in the dialogues between our conscious styles and how we are moved, spoken about, constructed, and acted upon. In a conversation with Ben Ehrenreich, she explains: “For a long time I’ve been meditating on the conditioning that keeps us hooked in to certain systems of power and that generate within us the conscious reproduction of the very systems that we criticize . . . I’ve been thinking a lot about the mark left at the end of that process of reproduction.”

How and when does expression warp into a mode of senseless reproduction? In appropriating the language of factory processes, Dorantes signals the many ways we can inadvertently slip – individually/collectively, privately/publicly – into automation. The text collides personal gestures with images of monitors, assembly lines, consumption, and pollution. We are asked to reconsider our own entanglements to expression and its aftermaths. Where is violence manufactured? What styles allow and encourage our conditioning, our reproducing? How to be in systems that place you in permanent states of negation?

Estilo/Style rejects this exterminating logic – which can be masked as labor, as nation, as protection, as literature, as love – by unmaking its various modes. Expression becomes energetic, an unpredictable current coursing between two or more forces. You, an instrument of a repressive patriarchy, faces the shreds of its violent constructions. Nosotras represents an unruly knot: their ruthlessness cannot be divorced from the actions constructing their state of dispossession. They are conditioned by an impulse bent on their destruction. Rather than reproducing terror, Nosotras rewrites their fury as a never-ending wail of unraveling and suspension. At the end of #10, the text taunts, “we are your codes, a line of figures for you to subjugate. Numbers, red and brilliant. Boiling.” The next page continues:

A systemic carelessness produces their precarious unbeing. Nosotras are not only hundreds of girls burning together; nor are they solely a swarm of many-legged fevers with “girl masks and animal tongues.” They embody the mark left at the end, silenced reverberations of state-sanctioned cruelty and complicity. Estilo/Style offers no resolution. What remains is a sustained, active meditation. As readers, we are submerged between disintegration and possibility, “[a]t that world that is no longer a world”, a place undone by its own devouring appetite. Those who should remain mute, disappeared, disposable, exiled rise to breathe their devastation.