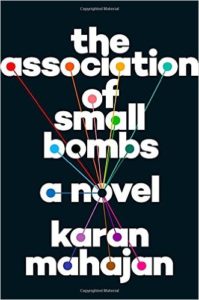 The other week I met a friend at a vaguely hipster bar on a block where the University of Pennsylvania gives way to West Philadelphia. We sat outside on a cheaply fenced-in sidewalk with a view of the Boston Market across the street. I described the novel I was reading, Karan Mahajan’s The Association of Small Bombs. How may a novel account for a bombing? How might this literary form answer to this contemporary form of violence? Lately such questions are only more urgent: throughout recent news the small bomb proliferates (Baghdad, Istanbul, Brussels); we read to discover how to understand it, to mourn or counter or prevent it. After all, as I realized mid-conversation, scenes such as that night’s at the bar are what a small bomb means to disrupt: everyday congress in public space, a space fraught with socioeconomic forces that the middle class too often fails to see.

The Association of Small Bombs centers on the 1996 bombing of the Lajpat Nagar market in Delhi, “a bomb of small consequences,” in which thirteen died and thirty were injured. Among the dead were two boys, the only children of Vikas and Deepa Khurana, a documentary filmmaker and his wife. The boys had been at the market with their friend Mansoor Ahmed (significantly, a Muslim), on an errand that Vikas would later pettily lie about (they were there to pick up an old television from the repairman, a frugality unbecoming to the truly middle class). The bomb is the work of the Jammu and Kashmir Islamic Force. Arrests are swiftly forthcoming, yet those arrested are mostly innocent, and the only somewhat guilty party among them is the most ridiculed — because most intellectual — member of the terrorist group. Later Deepa will wish to visit the accused terrorists, saying, “Just once, I want to talk to one of them, to understand why they did this.” To which her interlocutor, a man of the world, replies simply: “They wanted to disrupt the election in Kashmir.”

In other words, there is no deeper meaning to be found here: there is the logic the terror provides; or there is no logic. The bomb exposes the artifice of explanation, the friability of the stitching through which society coheres. One character who has abandoned nonviolence for violence puts it this way: “What was a bomb, really? A means of separation, of opening. A factory of undoing. It took the violent forces of civilization and applied them to the very opposite aims with a childlike glee.”

That night at the bar my friend and I spoke of the form of the novel more than that of the bomb, a conversation that then haunted my reading of Mahajan’s work. My friend made an astute observation about how rare it is for fiction to render an encounter between subjectivities. In daily life our experience is continually, disarmingly collective: my subjectivity keeps meeting another’s. I can’t deny the difference between my experience and yours, but nor can I finally distinguish between them. Yet so often contemporary novels portray subjectivity as simply, fundamentally individual. Each character is a small, thoroughly described room, containing a restricted sense of self, secured there by the narrative. Characters are understood in the limiting terms of cause/effect logic: because X said or did this to Y, Y undertook Z action (fell in love, found religion, set off a bomb). Psychology here is curiously mechanistic: for every action, a motivation, and vice versa — as if behind every human act a definitive reason could be perceived and described. That Karan Mahajan’s ambitious, intelligent novel shares in this predominant trend is not itself remarkable, yet upon reading it I felt newly aware of the limits of this literary individualism. The form of psychological realism contemporary fiction prefers renders characters as rooms in the ward of the novel, its hallway the plot along which the reader progresses. Now, that metaphor is a little unfair — a little violent, perhaps, toward our shared literature. Yet the fact remains: my friend said something and this altered, elusively, how I read a book written by someone else. How may one tell a story of such casual blurring and undoing, the continual transgression of the borders of the self that proves how ineffectual such borders are?

I would argue that this is a question the bomb also presents. Mahajan’s novel, however, still insists on the individual — borders fortified — as the basic unit of the story. Watching the accused terrorists on the news, Deepa is plagued by the fact that “their personalities did not add up to a bomb.” The Association of Small Bombs is a perceptive attempt at this “adding up”: out of what personalities are a bomb made? What personalities does it make? The novel argues, implicitly and explicitly, that the bomb is best comprehended in such terms: of personality, of character, of interpersonal relations as cause and effect — the familiar stuff of fiction. One character reflects tellingly on the attacks of 9/11: “Earlier he’d felt the attack was just revenge against American imperialism, but now he’d come to see that the reasons for such aggression would have to be idiosyncratic, personal,” not economic but “emotional and hotheaded.” The only available public explanation for the bomb (“they wanted to disrupt the election in Kashmir”) cannot suffice; the novel seeks a private explanation, opening the doors to the room of each character — victims and terrorists both — to witness what occurs within these walls.

Yet there is a further paradox to the bomb, one which this novel glimpses but fails to represent. The bomb is “a means of separation,” “a factory of undoing.” Yet the violence of this act of unstitching is only necessary, and only possible, because social life is so thoroughly stitched, so relentlessly collective. “You destroy a city with the material it conveniently provides,” as the novel’s chief bomb-maker reflects at one point, shopping for fertilizer. We are continually subject to the most unjust and insufficient of one another’s narratives. The bar where I may spend my leisure time is a modest artifact of decades of displacement and gentrification; the “fast-casual” food franchise across from it testament to interrelated forces. The bomb does not separate, then; it blurs; it collapses distinctions. The bomb exposes our vulnerability to one another, the fact that the fate of our children is caught up with a distant conflict, a conflict that is no longer and never was distant. Mahajan’s novel documents this essential collectivity — this bombing rewrites the fate of each character — yet it keeps trying to “add up” personalities. To manage this, the narrative remains at a distance from its own characters, retreating regularly from close to distant third-person narration and privileging wit over intimacy. This distance is an attempt to maintain order, to keep these personalities and stories and contingent historical selves more orderly than memory or history or aftermath are. The Association of Small Bombs tells the story of the bomb in terms of precisely the types of order and separation that the bomb ruptures.

Note the novel’s reliance on flat summary (most notably at the beginning of chapters), as if to make sure the reader knows which room each character is in: “As a master terrorist, he no longer saw the strangeness of what he did or how he talked about killing.” The Association of Small Bombs has that quality that seems too common in publishing today, in which the first third is taut and potent, but the writing loosens thereafter. Mahajan offers some truly gorgeous prose; he can conjure a setting in detail so sensuous it feels almost dangerous. This off-handed description of a bus ride, for instance: “The landscape, a wild scrawl of reddish terraces and gushing private rivers, came right up to the bus, nearly shattering it. The dug-up road heralded the air.” And threaded through the novel is an engaging meditation on the bomb as hybrid of body and technology. Yet Mahajan counterbalances this lushness and complexity with banal exposition, a choice I never understood.

Unfortunately, these aspects of the writing undermine the novel’s attentive thinking. Of the attacks of 9/11, one character (a “terrorist”) muses: “if you thought of the world as a jungle, what happened was simple, obvious: sensing the rising power of one group, Atta and company had attacked the temple of that group.” The clumsiness of this “sensing” and especially of “the rising power” (surely America’s power was already risen by the 1990s?) jars. If these are meant as the character’s, not the novel’s, errors, we can’t tell. Later this same character will return to 9/11: “Atta must have felt himself full of sexual hate for the people piled high in the towers, bodies in a vertical morgue. He saw the opening between the two towers as a vagina into which to shove the hard-nosed dick of the plane. … [H]e must have seen someone appear at the window and look at him — a woman, maybe, a blond American woman. At that moment he got an erection. At that moment he slammed into her alarmed face.” Both this novel and its readers deserve better than this easy image of terrorist as sexual brute. The novel persistently connects sexual repression with a turn toward Islam, then toward Islamist violence — religiosity, even or especially violent religiosity, as a solution for the problem of sexuality. The rhetoric of this connection is so comfortable — for Western readers particularly — that it hardly requires a novel to represent it. Yet the further development that it seems Mahajan desires never fully occurs. I’d argue that this flaw, too, results from an overemphasis on the personal, narrowly conceived: Atta seen primarily in terms of sexual desire rather than in the larger geopolitical context through which his face appeared at our window, as it were, or vice versa.

Ultimately, my complaint about this novel is one that its characters would recognize: I find its narrative of the phenomenon of the bomb insufficient. This is a novel to welcome into our conversation about contemporary terror, a novel that will contribute to that conversation. Yet I will keep looking, too, for a novel whose sense of form answers more forcefully to the questions of self and society that the bomb raises, that the bomb demands. Perhaps that novel may be a “factory of undoing”: unseeing the wall between one self and another, between even “terrorist” and “victim.”