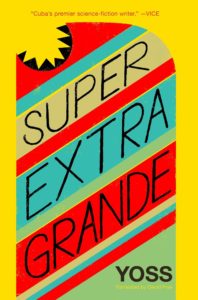 No es every day that you read a novela en la cual the first third is set in the intestines of a creature super grande. Literally dozens of páginas spent andando por the sludge of intestinal matter in busco de a missing bracelet.

Ni es every day that you read a novela en la cual the hero is a veterinarian, with an alien assistant. A giant veterinarian. A very large alien assistant, the only vegetarian of a predatory species that is genetically unable to understand humor. It is un gusto leer a science fiction novel in which the male characters are protagonistas simpáticos, dulces, who dedicate their lives to gentle, compassionate work.

Ni es every day that you read a novela en la cual the future of humanity is dominated by the Hispanic world. Gracias al González Drive, faster-than-light space travel inventado by a científico ecuadoriano, pioneered by investigadores ecuatorianos. The bandera that they plant on Mars, after the successful mission primero, reads:

SUCK ON THIS, DUMB-ASS GRINGOS!

Narbuck, the humorless Laggoru, might not be laughing, but that’s some funny shit.

Super Extra Grande, written by the one-named Cuban science fiction writer Yoss, available from Restless Books in a sardonic translation by David Frye, is an unusual and hilarious little novel. Like any good science fiction story, the premise is intriguing: humans (specifically, an Ecuadorian named González) develop space travel. But they do it without resolving any of the problems that plague the early twenty-first century. Racism, sexism, homophobia, xenophobia remain alive and well. Nationalism, democracy, and misuse of resources are unresolved. Totally unfit for the technologies that we now control, we travel abroad and meet extraterrestrial life forms, only to discover what we truly are: an insular, backwater species flying among the stars.

The good news? Prejudices and technological weaknesses vary, but aliens are selfish, greedy, overwrought creatures too.

The protagonist of Super Extra Grande is Jan Amos Sangan Dongo, veterinarian to the giants. “The only veterinarian biologist or animal doctor in the whole galaxy, human or alien, who specializes in extremely large organisms.” Son of two historians of education, of Cuban and Japanese descent, our hero was born with a disorder that made him extra tall, almost seven feet, with what he describes as “the body of a troll. And a face not even a troll would touch.” An anti-hero who is not a misogynist, he promises, and we may even believe him, despite the two beautiful ladies who serve as his assistants, despite the convoluted love triangle he narrowly escapes.

Here are some other technologies that humans control despite a barely functioning civil society: Nuclear weapons. The Internet. Drones.

Here are some archetypes that don’t appear in this novel: Gringos. White people.

Sangandongo means big, grande, like our hero, like his patients. Lazy, too. Holgazana. Inhábil. Dr. Jan Sangan may be all these things, though it is hard to tell. He spends the first third of the novel trudging through the fecal matter of a Tsunami, the largest known aquatic life form in the galaxy so far, in search of a wedding band that the Tsunami, unknowingly, has swallowed. In a multi-species universe, Sangan explains, medicine and the veterinarian sciences merge. To understand one species in the universe, it’s necessary to understand them all.

Yet for a doctor, a veterinarian doctor at that, Sangan doesn’t seem to save a lot of animal lives. He illegally shoots a giant amoeba with a series of high-security rockets. He plows through the intestine of a Tsunami. Much like any other male-science-fiction protagonist, he eschews the delicacy of complex scientific problem-solving, preferring gunfire and brute force. His methods bring to mind chemotherapy. Also fracking. In this sense, Sangan is not so different from many researchers today.

“At this point in my autobiography I’d have to go off on a rather long digression, because my life history is inextricably bound up in the history of humankind and the entire galaxy,” Sangan writes. At the dawn of the twenty-first century, he explains, humans believed that the future of mankind was the “technological singularity”: “almost all futurologists agreed that the defining event would be the much-anticipated advent of artificial intelligence.”

It goes without saying that this future imaginary was one ruled by the people who control artificial intelligence today, like the United States, China, and the United Kingdom. The colonizing nations. This is a future we read about every day, in the New York Times, in Wired, in Vice. It is shaped by corporate entities like Google and Facebook. It is controlled by men with pale faces and brilliant minds. Its robots sound like Scarlett Johansson, look like Alicia Vikander, and behave like Salome.

But when Father Salvador González at the Catholic University of Guayaquil formulates his famous tunnel Macroeffect theorem, the future reshapes itself around him. It comes out, somewhat unexpectedly, in remarkable prose. Short, rapid paragraphs. A universal lingua franca called Spanglish. (The dialogue of Super Extra Grande, also in Spanglish, is a carefully rendered triumph of translation.) “I am an Ecuatorian first, a científico second; Catholic, only en tercer lugar,” Father González declares.

This was the actual technological singularity, everyone agrees. A hemispheric, global, extraterrestrial event.

Yet Sangan knows, and Yoss knows, that the history of the future doesn’t begin with the present. Instead, it extends far into our colonial past. There is no way to extricate the Caribbean, las islas que se repiten, from a history that reaches back to Christopher Columbus’s encounter with America, through enslavement and genocide, revolution and globalization. In this way Super Extra Grande takes its place among other recent novels of postcolonial sci fi, by writers like Nalo Hopkinson and Nnedi Okorafor, to imagine a future that carries with it the legacy of conquest.

Hopkinson and Okorafor offer at least an echo of utopia. Not so for Yoss, whose stories cycle more closely around the modern day. Sangan, our hero, is the descendent of illegal immigrants, 4000 Cubans who left earth in homemade spaceships, got lost and ended up on a planet they named Coaybay.

Coaybay translates, from the Taíno, as “something like Paradise.”

Hannah Alpert-Abrams is a PhD candidate in comparative literature at UT Austin. She has written blogs and reviews for Full-Stop and Pterodáctilo. You can see more of her work at www.halperta.com.