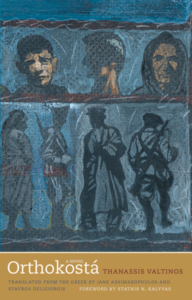 Read Orthokostá to know what it’s like to live in contemporary Syria: a country partly occupied by an invader, insurgent groups fighting the government and each other, government death squads killing citizens, guerillas herding peasants into detention camps where they are randomly murdered, communities and clans turning against one another, families riven by conflicting political and religious loyalties, villages and farms burned, refugees streaming out of the dangerous countryside to the capitol or to foreign countries. It’s chaos, but it’s not Syria. It’s Greece in the late stages of German occupation in World War II and in the early stages of the Civil War that followed. If we lack for now the Great Syrian Novel, we may have to make do with Orthokostá and our ability to extrapolate from the Mediterranean country that gave us the word “chaos” to a more easterly Mediterranean country that now manifests it.

Although a devotee of difficult novels, an exponent of excess, and long-time part-time resident of Greece, I have to admit I was nearly defeated by the radical imitative form of Orthokostá, its seemingly chaotic collection of oral “histories,” their obsessive repetition of and variation on random events in various unfamiliar settings, and a plethora of Greek names — of villages in the Peloponnese (where the monastery of Orthokostá and most of the book are located), of narrators, of their siblings and cousins, of their cousins’ neighbors, of their captors, of their captors’ right-wing and left-wing organizations, and of minor historical figures. At least I knew the names of saints, holidays, ceremonies, and foods. The publisher supplies a lengthy foreword and a longer introduction by American professors with Greek names, but if you’re not interested in Greek history, politics, and culture — and not willing to extrapolate — you may find yourself overwhelmed. I suppose something similar could be said about As I Lay Dying: “if you’re not interested in Southern culture and willing to see the Bundrens’ stories as any family’s drama . . . .” But Faulkner’s novel is accessible storytelling compared to Valtinos’s torrent of details.

Greek and non-Greek readers must accept these details because they create the novel’s compelling authenticity — and demonstrate the author’s artistic heroism. Valtinos’s many — maybe 30? — narrators are not literary people. They are often traumatized folk when they speak in the present and are probably somewhat unreliable reporters when they speak of the past. Because the scenes of burned homes, tortured bodies, and murdered familiars are so deeply imprinted in the tellers, details relevant to a linear, unified story come mixed with facts or impressions that seem irrelevant and excessive. Most of the narrators are from villages and are telling their stories to other villagers, not to some oral historian visiting from Athens, so the narrators constantly invoke specifics to remind their auditors of how the speakers or the victims they observed were related to the auditors or people the auditors once knew or to the man who owned the taverna on the village square. This digressive technique can frustrate a reader not from the narrator’s village but is a brilliant method to represent the densely connected communities that were turned into chaos by political ideology and its violent devices. The method also asserts the survivors’ desire to save in memory — in speech — everything they can think of, no matter how trivial, because almost everything was lost.

In 1989, the Greek-American journalist Nicholas Gage published Eleni, a book in English about his Greek mother who was killed by the Communist Resistance in the Civil War. The book became a bestseller and was later made into a popular movie. There was in Greece a huge outcry against Gage for daring to criticize the iconic Resistance. First published in Greek in 1994, when the Socialist Andreas Papandreou was prime minister, Orthokostá was also fiercely attacked for its presentation of the leftist Resistance, for which the Socialist government held particular respect. Gage’s book was a rather narrowly focused personal story. Orthokostá is the epic of a small area told by numerous prose Homers.

In the eastern Peloponnese occupied by German soldiers, Resistance fighters were burning villages and assassinating citizens who were accused of resisting joining the Resistance. Non-political farmers and trades people were detained or killed because they were suspected of collaborating with the Germans, who were subjecting people they suspected of being partisans to atrocities. Some citizens who felt unjustly victimized by the Resistance formed armed “security battalions,” which were seen by the Resistance as further proof of collaboration and further reason to commit more terrorizing atrocities. Members of the Resistance imprisoned and killed some residents of destroyed villages in the monastery of Orthokostá. I suspect Valtinos chose that historical setting because the occupied monastery implies the failure of the Greek Orthodox Church to ameliorate the suffering caused by political extremism and individual Greeks’ lust for power. In the highly politicized literary landscape of Greece, where the media are closely affiliated with ideologies and parties, Valtinos’s willingness to recall unpopular history was, to me, an act of artistic heroism. When this English Orthokostá makes its way back to a Greece again ruled (if “ruled” is the right word in unruly Greece) by a leftist government, Valtinos, now 83, will almost certainly be put through the wringer of ideological criticism a second time.

Orthokostá is published by Yale University Press in a welcome series of translated works called “World Republic of Letters.” We’re hearing recently of novels outside of English being composed in “translatese,” a dumbed-down version of a writer’s native language, so that the works can be easily translated into English for the global market. Yale University Press is braving many dangers with this novel that lacks a protagonist or plot or stable point of view, but translation is not one of these dangers, for the mostly uneducated narrators (many women of that place and time could not read) speak simply, in a diction and syntax that should have been easy to carry over into English. All those “strange” Greek names, of course, had to be rendered as they existed in Valtinos’s original. His narrators don’t seem to know how the name “Orthokostá” originated. The word is, appropriately, strange to them, just as the murders that transpired there are strange, παράξενος in Greek, a modern word containing the ancient word ξενος, which meant “stranger” or “foreigner.” The Germans are foreigners, but Greeks killing members of their own families are also strangers.

Valtinos’s stories of suspicion, flight, capture, torture, horror, and survival usually run to six or seven over-loaded and under-determined pages. They are sometimes followed by a one-page narration, occasionally also witness to horror but frequently a slice of Greek life that offers some relief from the horror. It is the alternating method of Hemingway’s In Our Time reversed. In that collection of short fictions, pre-World War I and post-war stories alternate with brief violent “interchapters.” It is tempting to quote from one of Valtinos’s lyrical interludes to solicit readers into this daring and rewarding work, but to do so would be complicit with those who wanted to forget what happened at Orthokostá and other monasteries that became prison camps. So here is a more representative passage:

They arrested me in place of Márkos and our uncle the doctor. My uncle had left first. Márkos later on. Toward the end of November. There’d been a light snow, about two fingers high. In February, the seventh or fourteenth of the month. And it had frozen. Two rebels came by, strangers. Which of you is Eléni? I am. At daybreak. They took me to Mángas’s house. Old Man Dínos Haloúlos was there. Yiannoúkos’s father. And Biniáris I think. And the Braílas woman. Aunt Eléni Kyreléis with Kikí. And Kyriákos Galaxýdis. They took us down to Loukoú Monastery. Old Dínos had a shaggy wool cover. I don’t remember if I took blankets. I must have taken something. They might have brought me something. At Loukoú we found others. Eléni Roúgas. Pétros’s mother . . . .I thought about running off. About escaping. But where would I go? My folks were in Kastrí. They had stayed there. Old Mavroyiórghis and Mavroyiórgaina. They’d be the ones who would pay for it.

Although the narrator here survives, and the passage recounts no violence, she reports in the following six pages that she is released, wanders, hides, nearly starves, is arrested again, and finds out “the Braílas woman” was killed. Eléni says, “I got out in time. She didn’t.” The passage has the marks of authenticity: the exact names, the relationships, the precisely recalled but maybe irrelevant detail (the “shaggy wool cover”), sentence fragments as splinters of memory, the thinking of a simple person in an unfortunately simple situation, and, at the end of her account, the survivor’s matter-of-fact tone that implies luck and randomness, life in a time of chaos.

In the stories Valtinos chooses, he appears most sympathetic to the people terrorized by the Resistance fighters, but he allows some of them to articulate their points of view. Several educated narrators see events in the light of national and international issues. Valtinos does not romanticize the villagers. An interlude recounts one village’s irrational, unfounded hatred of another village. In one of the longer pieces, Valtinos tells of the trouble a tyrannical family patriarch causes over a young woman he wants to marry. It takes a village, unified yet stratified, to harbor resentments that turn to revenge when politics offers an opportunity. In a late interlude, a narrator concludes his story of non-political murder as evidence of “God’s wrath, all that, there’s nothing else you can say.” Valtinos doesn’t subscribe to this monotheistic rationalization of hatred and violence. The fact of his multiple narrators suggests that if Valtinos chose to give theological justifications for the events that he presents, he’d go back to the Olympian deities whose petty conflicts afflicted humans who struggled to understand the strange fates visited upon them.

This is a preliminary report. After recovering my appetite for the fog of war and history, I’ll read Orthokostá again. I believe there are intricate orders to be found, probably not an encompassing theory of how the Civil War began but at least recurring figures who resemble traditional literary characters and isolated actions that connect into something like conventional plots within the general chaos. One of these characters is Eléni, the narrator of the passage I’ve quoted above. In the 46th of 47th chapters, Eléni tells of escaping from the Peloponnese to Athens, where she becomes a seamstress and, after the Civil War, returns to the Peloponnese. For her and for the book, the Odyssean return may be a happy ending, but Eléni and Valtinos do not forget her brother Márkos. Eléni’s final words are “Kontalónis betrayed him. I think that’s why they killed him. I was twenty-two years old at the time.”