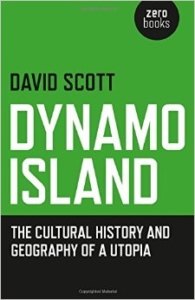 If you’ve never seen John Boorman’s Zardoz, here is the gist: Sean Connery, clad in a loincloth and two bandoliers, is Zed, an “exterminator” who spends his days shooting and raping, mostly, in honor of Zardoz, a god-like figure that takes the form of a giant floating stone head. This head transports Zed to a parallel, anti-utopian Britain, where the inhabitants spend the day baking pastel-green baguettes, communally meditating, and literally staring at their own navels, lost in what Fredric Jameson describes in Archaeologies of the Future as a “sexless ennui.” The film is what one reviewer classified as “its own phylum of movie type or something. Like a platypus.”

Like Boorman’s Zardoz, and Thomas More’s Utopia before it, David Scott’s Dynamo Island sites itself within the same known geography of the north Atlantic — and then proceeds to construct a kind of phylum utopia that throws our existing knowledge into sharp relief. On Dynamo, inhabitants ride bicycles and buses and trams, smoking a joint is the same as having a beer, breweries abound, and the entire island is powered by renewable sources. It is a modern-day vision of utopia: sustainability and stability, without the loss of the individual; Portlandia but less insufferable; an extended exercise in post-hipster wish-fulfillment.

In a world with no chill, Dynamo Island is nearly all chill: “The relatively slower productivity rate of a zero-growth economy means there is less stress.” The countryside is perfectly pastoral; the cities are completely cosmopolitan; everything is governed by a particular sense of scale:

The dominant principle governing the ethos of Dynamo is that man and the animal kingdom are the centre of the world and that as far as all possible infrastructure and activity should be scaled appropriately . . . Much importance is attached to the relationship between inside and outside with arcades, verandas, and other sorts of spaces between interior and exterior being maximally valued.

As part of this zero-growth economy, Dynamo remains somewhat agrarian in nature. The island is comprised of eight provinces and governed by a federal republican system, with “a tradition of broad, if painfully slow, consensus.” (In a nod to More’s Utopia, Dynamo is also a commonwealth.) Women are represented equally in its house of representatives, and have had suffrage for some time. But this equality doesn’t seem to extend to the Dynamoan cultural canon. After presenting us with the capital, Veloxeter, and an overview of Dynamo Island’s natural resources and daily life, Scott focuses his attention on the island’s most illustrious inhabitants, nearly all of whom appear to be male — noted figurative painters like Edward Persil and Albert Sizzler, thinkers like George Hagel, Frederick Netshow, and Jack Derider. The homonymic allusions are born out in the text. George Hagel, for instance, puts forth at the end of the nineteenth century the notion of “systematic analysis in which the dialectical relation between spirit and matter was argued for,” while “the great late twentieth century thinker” Jack Derider concludes that “humankind is condemned to inhabit an epistemological world of symbolic (mis)-representation.” Even in imagination, the realities of accomplishment appear one-sided.

Dynamo Island is a nimble ludic attempt at this symbolic representation. While ostensibly a work of fiction, the text follows no discernible narrative arc. Jameson contends utopias are unusual constructs, wherein “ontology conflates with representation,” and delineates utopian texts into three main categories: the historical fiction, the science fiction, and the inventory. Dynamo Island most closely resembles the latter. The text takes the form of an encyclopedia entry — or Fodor’s guide — then proceeds to construct a fictional entity within these very concrete constraints. Dynamo is rendered in the same Brittanica monotone throughout; its glossy white pages punctuated with gouache and watercolor details by Dynamo’s most prominent artists, depicting the island’s architecture, countrysides, and cityscapes. It’s all of the world-building of fiction, rendered deliberately with the dryness of a social theory simulacra.

As part of this world-building, it discreetly references the world that the reader knows to be true; through homonym and acronym (Veloxeter has its own MoMA, for instance; the island is a member of NATO), the reader is able to place Dynamoans within an actual existing cultural canon. And it does this discretely, too, through discussions of Dynamo in the context of western Europe’s history and references to extant geography. As Dynamoan philosopher Netshow argues, “humans [can] only communicate — knowledge, sentiment, belief — through representation.”

What Dynamo does is imagine an island that has advanced scientifically without the exploitation of the industrial revolution, the brutality of colonialism, and the other ancillary uglies of late capitalism. The very idea of a zero-growth economy implies an absence of that most pressing and destructive human quality: greed. Dynamo uses reality to get to representation and then roots that representation within a new reality. It’s Sid Meier’s CIVILIZATION for those who don’t aspire to empire but equality.

Writing about Zardoz, Jameson argued that its ostensibly anti-utopian bent “[forestalled] the kind of thinking which would explain the present society’s imperfections and injustices as the result of history and human action, rather than as the reflection of some immutable and constitutionally defective human nature.” This is a central problem responded to by Dynamo Island. The island shares a common history with its real-life geographic neighbors in the north Atlantic — occupation by Romans, a thriving wool trade, proximity to World Wars I and II — and similar resources. Within these similarities, though, lie divergences: a policy of neutrality beginning during the Napoleonic Wars, for instance. If utopias are ostensibly a teaching genre, one that forces the reader to confront where human action has been imperfect and unjust, how are we to apply Dynamo’s approach to our own current destructive context?

Like the BBC’s My Perfect Country, Dynamo Island presents an amalgamation of best practices, made strange by how impossible and possible it all seems. Dynamoans aren’t what Netshow’s continental counterpart might have called “ubermensch.” They fuck, smoke joints, have kids, hang out with their parents, have a beer or two, ride their bikes around, go on holiday from the city into the country and vice versa. Through his discrete and discreet references, Scott isn’t just guiding the reader through the known to the as-yet-unimagined: he’s directing us to a place that could possibly exist, or at the very least, have been less than imaginary, had different action been taken.