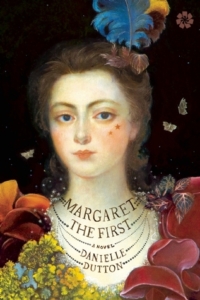 The use of an historical figure as inspiration for character is a seductive one for the writer, as so many details are ready for use — time period, significant “plot” points, physical attributes, even hearsay or gossip can be of service. Yet, these “facts” are perhaps the least relevant aspect. For unlike biographies or histories, what is unique and relevant about fiction derived from actual people and events is that the people and events of history become something we experience. As readers, we are invited into the thoughts and emotions of a multifaceted person rather than a static figure, and through this invitation we have the opportunity to make connections and perhaps even recognize ourselves, which historical facts, often dubious anyway, simply cannot provide. Danielle Dutton’s fourth book, Margaret the First, is set within the seventeenth century and takes as its protagonist and heroine the real figure of arts and letters Margaret Cavendish, the Duchess of Newcastle. But one might view this novel not just as a portrait of the trials and tribulations of a woman, or an artist, or an insight into the past, or how the past is contained in the present, but also, perhaps, as an inspiration for how one might approach one’s life and one’s art — “rejecting any clocklike vision of the world.”

Dutton structures her text in five parts, which reflect Margaret’s progression as a writer and her effort to realize her ideas in a context where (as today) female ambition is both lauded and criticized and limited by what women are expected to do and be. The second part, in first person, takes its section title from Cavendish herself, “A True Relation of my Birth and Breeding” — with “true” taking on a new complexity as it is used in this text. Here, the reader sees the linear progression from the girl, the “Queen of the Tree-people” with hair that “grew crimped and fierce as wild lettuce” who discovers a secret world in a bubble; to the young woman at court, where she enters another “unknown universe”; to the young wife, now married to the older and more highly stationed William Cavendish, uncertain of her role, exactly, and who finds herself on the sidelines of conversations between her husband and other male thinkers, pretending to sew; to the woman now nearing her thirties, who has begun to write in earnest, and who yearns for the fame of Shakespeare and Ovid:

I filled sheet after sheet in my straggling hand — no one knew what with. And when he inquired at breakfast one morning: “I’ve long found pleasure in writing,” I explained, “but was only joining letter to letter and word to word. Now,” I said, and took a bite of pear, “I begin to connect idea to idea, as the ancients would form pictures of the stars.” William suggested that a writer requires an acquaintance with the world, some external stimulation. “Might not a brain work of itself,” I countered, “as a silkworm spins out of its own bowels?” I would benefit, he maintained, from engagement outside the house.

Through all of this, war looms, and Margaret is tossed asunder to Paris then Antwerp then finally back to England. At the points in the narrative where world events are revealed, Dutton uses a reporterly and understated rendering (“Cromwell was dead”). People die simply and directly, battles happen, almost as a matter of course, corpses are piled, rats crawl, the Plague arrives. All of this casts a hovering glow of history over the more important narrative of how and what Margaret thinks, observes, describes, and writes.

What we learn from this, of course, is multiple. In many ways, the curious and fanciful child remains fully present in the adult through her strange and provocative dress (“After all, dressing is the poetry of women”), and her strange and provocative books. The questioning that Margaret engages with in her thoughts, ideas, and writing, bears both the bravery of the innovator and the naïveté of a child. Margaret is described as self-isolating as a young person and this continues, perhaps encouraged by the exile she was forced into, well into adulthood, and as readers we see how this secluded time and space enabled her to fully develop her thoughts. The artist requires solitude, and it is fortunate for the fame she clearly desires that her circumstances allow such a freedom. Though she experiences myriad hardships (the early death of her father, exile, the inability to conceive children, etc.), she still remains a person of privilege. She does not have to concern herself with domestic tasks, earning a living, or raising children (though the desire for them is certainly clear).

It is evident Margaret only begins to live once she begins to write what she calls her “Paper Bodies.” The desire to write is hinted at from the beginning, however. As a girl, she is described as “making the world her book,” but upon leaving childhood, this pastime is admonished, and she is told a woman must focus on “beauty and virtue.” Eventually, though, we see that she not only returns to her early interest in writing, but also reinvents what is considered beautiful and virtuous — at least for herself. She is constantly dreaming up costumes and observing the natural world in a way that points to a very different approach to thinking about how one presents oneself to others, as well as how something as small as a drop of dew can provide just as much grandeur as an imposing palace.

Throughout, Dutton provides sumptuous lists — of plants, of food (so much food!), of dresses, of events to be participated in. This proliferation, especially in the second section, mirrors the virtual flood of thoughts and words that finally come to Margaret when she begins to write. The initial, difficult attempts are written with the stops and starts that will be familiar to all writers. There is the feeling of testing the water, but there is also the feeling of wanting to get it right. This, in turn, is reflected, again, on the level of Dutton’s sentences, where the reader finds precise and often surprising syntax and diction, also suggestive of the precision and surprising mind of the protagonist. Describing her “modest closet plays,” while preparing to return to England, we learn,

I was writing more freely than ever before. In the cloister one moment, we’re next on a field of green, where sheep graze around a maypole, and Lady Happy is a shepherdess, while the Prince-who-woos-her-as-a-Princess is a shepherd. Next, Lady Happy is a Sea-Goddess and the Prince-as-Princess is Neptune astride a rock . . . But would Happy, who fled all men, be happy to be his? I hadn’t yet decided, but hurriedly placed a lid atop the crate, then marched myself and my household to the shore. The goods and lower servants boarded a frigate. I, at last, a Dutch man-of-war.

What is both surprising and remarkable about Margaret, is that the attention, success, and fame she desires actually arrives. She paints black stars on her cheeks or dresses as a beehive or bares her breasts in an Amazonian costume – efforts to simply be acknowledged as existing in the world that will be familiar to both women and artists – and she becomes the talk of the town. She writes, though she’s not had an education, and even though, at first, her spelling and grammar are atrocious, sends her work to be published, and becomes almost immediately renowned. And while there are definitely some criticisms, in the main, she is celebrated for her unique approach, even being invited to speak at the Royal Academy where no woman had presented before.

This would appear, in our 21st century minds, the result of a careful plan or at least the suggestion of one. Yet, as Dutton offers through this narrative, it is clear that Margaret is simply doing as she pleases, sometimes recklessly, sometimes bravely, certainly by hard work and effort, and it seems, always without regret. This, of course is not without consequence. There are moments where the reader might find Margaret as vain and unbearable as some of her acquaintances do, something she acknowledges, but doesn’t quite apologize for either,

‘Not that I should care what Mary Evelyn thinks,’ Margaret says, pushing away her plate. I have made a world, she thinks, for which nobody should blame me.

Virginia Woolf, another writer to explore Cavendish, (and from whom Dutton borrows) indicates in her essay, “The Duchess of Newcastle,” with a rather more judgmental stance than Dutton, that “though her philosophies are futile, and her plays intolerable, and her verses mainly dull, the vast bulk of the Duchess is leavened by a vein of authentic fire.” This “authentic fire” is what seems to fuel Dutton’s rendering of Margaret. As Cavendish herself wrote, “Art itself is, for the most part, irregular,” and Dutton employs this idea as a guidepost for her narrative approach. When one is writing a life, it is necessary that the methods be multiple and, indeed, irregular — as life, of course, rarely follows a straight path and is full of contradictions. “[S]ince it is said, nothing is truly known” it seems that the best approach to living is to embrace both uncertainty and contradiction and “wonder together at the turning of the stars.”