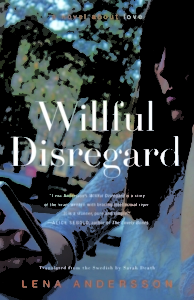 Several miles inland, after one is thrown from their immersion in a churning, choking sea of desire — it is not up to them; they could not have ejected themselves from it — their mind inevitably turns to the one facet of the catastrophe they could have controlled: How did I let that happen to me?

But one cannot even be vigilant for a fall like that. Its conditions are so specific — the ravaging saturation of every part of life, the way it drowns and cancels and replaces the familiar parts of a person — it cannot be evoked or sufficiently explored to prevent another loss. But Lena Andersson has done it.

Willful Disregard is the Swedish author’s fifth novel and her first to be translated into English by (the spectacularly named) Sarah Death. The novel observes poet and essayist Ester Nilsson who, living ascetically after graduating with a degree in philosophy, undergoes the all-consuming shock of finding something the presence of which diminishes every other facet of her life. That something is the promise of a cerebral union with artist Hugo Rask.

To be in the glitchy, unsheddable clutch of a crush is to get lowered into an inexplicable state of constructing justifications for feeling feelings that exist at odds with rationality. The thorough demoralization one undergoes when falling unskillfully in love seems like it necessitates a consequence (a consequence would be a justification). Ester’s heartbreak turns the book’s epigraph from foreboding to tragic:

“If a person . . . unlawfully takes and uses or otherwise appropriates something, a sentence . . . shall be imposed for unlawful dispossession. The same shall apply to a person who, without any appropriation, by fitting or breaking a lock or by other means unlawfully disturbs another’s possession or by violence or threat of violence prevents another from exercising his right to retain or take something.” — Swedish Penal Code: Chapter 8, Section 8

When somebody claims one’s desire is not worthwhile, even baseless, it’s a violation, but what are the damages exactly? What happens between two people in an essentially one-sided relationship?

Ester is vulnerable from the start, as she “perceived reality with devastating precision and lived by the understanding that the world was as she experienced it.” She is also “obliged to acknowledge over and over again that words remained an approximation. As did thought, which although constructed of systematized perceptions and language was not as reliable as it claimed to be.” Ambivalent about how reality survives her perception of it, Ester is not prepared for what happens when her world as she knows it hits the spindrift of romantic infatuation.

Those quotes are representative of Andersson’s prose in Willful Disregard. The thoroughness and precision of each scene and feeling Andersson depicts see, as Virginia Woolf intended, every atom saturated. Every moment is heavy with significance. “When you love and someone receives that love,” writes Andersson, “the body feels light. When the opposite happens, one kilo weighs three. Love that is just beginning is like dancing on a finely honed edge. It can happen that a kilo never regains its proper weight, which generates a degree of apprehension in the fearful, the experienced and the farsighted.”

After she delivers a lecture on him, Hugo kisses Ester’s hands and cheeks, arousing her to total distraction and unmaking herself into “one huge sense of absence” as she tries to go home, move on, and live a normal procession of days. Every second of her days become a chance to establish connection to Hugo, so much so that dedicating time to buying new clothes seems like an unwise sacrifice of resources.

For anyone who has ever known unrequited, uneradicable affection that sustains and spreads to embarrassing smiles, impulsive judgments, and ruined days, Willful Disregard beams with validation: “The brain knows no tenses. If it has longed for something, it has already had it. The leap comes when we do not want to lose the future we have already known.”

As a Scandinavian story, Willful Disregard demonstrates the misconception that Scandinavian art and people are clinical and unfeeling by illuminating how overwhelmingly many are the pieces of people and relationships about which one must feel. It is cerebral, but as the cover indicates, there is no better time for a story like Willful Disregard than in an age marked by overthinking the way cellphones enable people to do. Ester spends much of the story trying not to “expose herself to the anguish of sending a text message that would go unanswered.”

(As a Scandinavian-American, I will concede that this passage is Scandinavian to the bone: “Hope is a parasite on the human body, which lives in full-scale symbiosis with the human heart. It is not enough to put it in a straitjacket and lock it up in dark corners…. Hope has to be starved to death if it is not to beguile and bedazzle its host. Hope can only be killed by the brutality of clarity. Hope is cruel because it binds and entraps.”)

When she sends him a text that ends “We are drawn to love in order to feel that someone is seeing us,” he does not respond, and anxiety undoes her. “Her shame at having exposed herself and received no response completely ruined what remained of the holiday period, eating further and further into her nerves.” The moment she gets a text back, everything is fine, as if his silence — and her text (he does not acknowledge he received or ignored any communication) — never happened. She is not seen at all, and has hollowed herself to the extent she cannot see herself, either.

“Nobody can pretend away their rapture,” Ester thinks, but the notion that one has pretended their rapture into existence is just as unbroachable. Her friends — “the girlfriend chorus,” as she calls them — “having put so much effort into eradicating their needs in order to please, or behaving properly and not disturbing anyone, were irritated by Ester’s self-righteousness in not realizing that she was not wanted. He owes you nothing, they told her. She examined their argument and found that she did not share their analysis.”

Here is what Ester’s analysis yields:

Why did she nonetheless consider that some kind of obligation had been placed on him? Why did she feel that her brokenheartedness was legitimate?

Ester was completely clear on the following:

Hugo Rask was not under any obligation to love her.

Being loved was not a right.

Ester tries to castigate herself for having internalized a “stuffy old honor culture” that dictates that “courting a woman or sleeping with her imposed obligations, and even more so if you came back after the first sexual act for a further two nights’ union of the flesh.” But elsewhere in the novel, Ester approaches a much more generative insight:

Love, the real big thing, was a battle and an intoxication, that was how she accounted to the skeptical for this relationship being so complicated and demanding, and bringing her only suffering and no joy. The girlfriend chorus sometimes contradicted her, saying love was harmony and that you were considerate to each other, not this endless toil she felt obliged to engage in.

People who said that didn’t understand. The harmony would come once she had toiled for it. You had to earn it. You had to suffer and struggle in order for pleasure to arrive and then be worth something.

After they have sex, getting what she wants turns out not to be able to restore her. “It was unbelievable. Everything looked bright. It was a day filled with light. And yet another day on which she was incapable of writing. What little she did get down came out as dead phrases, spreading the smell of corpses across the text.” When one gets the future one has known, the future that desire has shown them, how does one reorient to the present and stop treating it like an impediment or narrow, perilous road to a specific destination? Ester cannot write, but she can read a book about Hitler because Hugo recommended it.

When she confronts him after he has avoided communication with her, her resolve dissipates. “There was no longer any need for explanations,” Andersson writes. “Everything she had wanted to ask, all those breathless ideas, turned out to have been an excuse to spend time in his company.”

It is exhausting but it is also thrilling and remarkably admirable — this sort of departure, losing oneself in love, is hard to chart, especially when there is no one else to corroborate where one has gone, when spring becomes “the season that reveals grimy surfaces and clogged corners,” when everything is “exposed by the keen rays of the sun.” There is no aspect of Ester’s infatuation that Andersson does not illuminate; every second is filled as if the reader spent it lonely and longing.

How the casual communication becomes the unanswered text, how the crush becomes unrequited love — that is, defined by lack — how someone becomes themself, alone, that phenomena deserves a novel like Willful Disregard, panoramically realized, witheringly exacted, as stunning as a bright, cold Scandinavian morning.