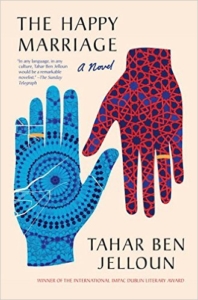 In the opening sequence of Francois Truffaut’s The Man Who Loved Women, Charles Denner narrates a series of Paris streetscapes, all starting with long, feminine legs. Women on the street are “tall stems,” and “pretty blossoms”; to anyone who watched the film, or took it as documentary, it would seem that the ratio of women to men in Truffaut’s Paris is about ten to one.

Part I of Tahar ben Jelloun’s The Happy Marriage takes its subtitle from Truffaut’s film and unfolds with a similar focus — and gaze. For the first three quarters of the book, our hero and his numerous romantic exploits are recounted in a third person narration that if it were any closer, it would be in bed with the hero himself. He’s been rendered nearly incapacitated by a stroke; he relies on a set of anonymous men (known only as “the Twins”) and a particularly attractive, adoring nurse for his daily care. Known first as “the painter,” then “the artist,” and finally, per his last lover, “the captain,” the husband in The Happy Marriage (hint: it isn’t!) is essentially leading us through a retrospective of his own life, and the women therein:

On that day, he started thinking about Ava again, beautiful Ava, the woman who’d left an indelible impression on his forty-year-old self. They’d managed to slip away for a few days to a magnificent hotel in Ravello. They swam, spent hours talking about books and films, ate simple dishes, drank good wine, made love several times a day, and shouted their happiness from the rooftops like children…In the evening they would take a warm bath together and she would massage him with some restorative oils, light some candles, and tell him: “I love you, and I’ve never loved anyone like this before.”

Adored by mistresses and curators alike, the painter-artist-captain is fabulously successful: he exhibits from Zurich to Sao Paulo to Beijing; his galleries are in Berlin and New York and Paris. His admirers are legion: mostly female, they are tall stems and pretty blossoms; they are journalists, students, models; they wear slacks and skirts but rarely, it would seem, panties. (To be fair, there is the occasional male fan; Francois Mitterand makes a literary cameo.) Like Truffaut’s protagonist, the painter-artist-captain sees a world of mostly women, and so does the reader.

In Part II, titled “My Version of Events,” the wife speaks, framing Part I as a frame itself: a fictionalized biography of the painter, written by the painter’s friend. No longer is he a captain, artist, or painter — he is now called Foulane, loosely meaning “just some guy.” Gone are the references to high culture; more present are the references to money, to family, to the Moroccan countryside where she is from, to the perceived mystique around “her people,” to her origin trauma of being sold into domestic work as a child, to her work as a fashion model, and her eventual calling as “a pretty thing on his arm.” The wife-heroine is struggling to reclaim herself:

I had become a stranger in my own homeland. My father had told me on numerous occasions that our roots were always a part of us, and I could see his point, but it felt as though mine hadn’t followed, or better yet, that they had abandoned me; and when I went to look for them, all I found were the ridiculous traces of a crude, impoverished peasantry.

I learned about love by reading novels and watching a handful of films while I lived in Marseilles. I would identify with the heroine, who would eventually triumph and fall happily into the leading man’s arms. I still couldn’t tell the difference between romantic love and real love.

By the time I turned eighteen, I was still asking myself: who should I love?

It is worth noting that Part II is noticeably shorter, narrated subjectively and simply by the wife. While dramatically shorter, it serves as a kind of inversion, a way for the wife to speak to the inaccuracies and injustices of the husband, a call-and-response to her most personal oppressor. (Both parties, for instance, are given the opportunity to list why one has fallen out of love with the other —“my husband doesn’t know how to lie,” “my wife confuses ‘true’ with ‘good’ and ‘false’ with ‘bad.’”)

Part II’s final chapter, titled “Coming Alive,” concludes with the wife claiming a new agency over her husband, sending away the stunning but small-breasted nurse so that the painter will be “completely and utterly reliant on me and me alone. I will relish these moments. I’ll revel in this blessing. Free at last, I’ll finally be alive.”

Speaking with Sasha Ghuppy for The Paris Review in 1999, ben Jelloun confessed that it was in fact film that turned him to the novel. Educated at a French-Arab school in Fez, Morocco, then the Sorbonne, he emphasized the influence of Orson Welles in particular:

It may seem strange, but I did not identify with writers, rather with certain filmmakers: Orson Welles, Federico Fellini, Yasujiro Ozu, Akira Kurosawa, Michelangelo Antonioni—people who told stories. Of course there was the intellectual influence of Sartre, Camus, Genet, and others, but that was due to the times, the zeitgeist. For my artistic paternity I looked to Welles and Ozu rather than novelists.

Welles’s final film, F for Fake, is presented as a biopic about Elmyr de Hory, a painter and art forger who is alleged to have sold over one thousand fakes to reputable galleries and museums. While a good deal of the film is spent documenting de Hory (and his biographer, Clifford Irving), F for Fake begins with a kind of inversion of Truffaut’s opening sequence: Oja Kodar, Welles’s real-life partner, struts deliberately, through the streets of Ibiza, gazed and gawked at by every passer-by. It would seem she is the only woman on the island.

As its conclusion, Kodar — attired identically to Welles, with duster and hat — poses as both an ex-girlfriend of Picasso, and the daughter of his forger, while Welles plays himself and Picasso at once: the ultimate inversion of lover and object, author and artifice. In the end, the viewer feels happily bewildered, as though she’s had too many drinks, wished that she could remember all of her new friends’ names. Throughout the film, the tension between acquisition and authenticity runs nascent and hungry.

This, too, is the terrain of The Happy Marriage — from Casablanca to Paris to rural Morocco to Marrakesh and back to Paris again and back to Casablanca, all the way to Tangiers. It’s hot and bright and cinematic; a siesta in the studio is just around the corner, an evening tryst later. While it’s tempting to read The Happy Marriage as a postcolonial exploration of marriage as a form of subjugation — and good deal of it is — it’s something else, too: a delirious meditation on lust and possession, oeuvre and authorship, told with a glass in hand.

Read it with wine.

Alexis Zanghi is a writer living in Minneapolis. Her writing has appeared in The Point and Midnight Breakfast, and she once had a zine store.