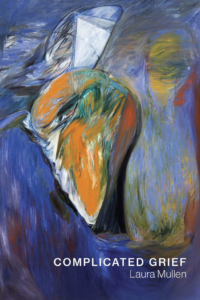 Complicated grief is a condition, not unlike depression, in which the period of mourning has exceeded a clinically acceptable passage of time (in most cases an impossibly stingy one month past the six-month time allotted for healthy bereavement). Complicated Grief, a memoir/poetry hybrid by Laura Mullen, is bookended by chapters on failed romantic love; she even compares herself to the famous “jilt” Miss Havisham. The book is full of accident and calamity: in the beginning a break-up is aptly compared to a car wreck; later a woman inadvertently causes the biggest forest fire in the history of Colorado while burning a love letter from her estranged husband. And in between is all manner of monster and invention, wherein Mullen investigates questions of blame and agency. Is healing possible? “Can you speak correctly without thinking?” And at the book’s close, she leaves us with “Questions for further study”: “Do you think we could just start over?” the man in the letter asks his wife, Mullen asks us, we could ask of our lives.

In Mullen’s poetry the fractured narrative is essential to telling her stories, logs of long-held and layered grief. However the prose is sometimes impenetrable, and the work risks collapse under the weight of wordplay. A shady ars poetica is at work in this line from the Big Bad Wolf: “Now come closer dear to your poor old sick granny who loves narrative poetry, he murmurs fretfully, poetry as transparent as the window the speaker (someone like us, he’ll assert – blithely ignoring the facts) looks through, more interested in exploring his or her own sensitivity than any of the limited (from that vantage) subjects.” But there is “for lack of a better word,” a heart in this book, I paraphrase Mullen, quoting Roland Barthes, quoting Balzac. It feels important to note that Gertrude Stein is haunting – presiding over? – these poems. “Prose is a prose is a prose.” The language pyrotechnics of the first two chapters risk alienating those of us who, along with dear old granny, cannot help but love narrative. The puns such as “please close the door / pleas: clothe the whore; clip-pity clop; drive or derive thru; horseshit / whore’s shit” – seriously, why so many whores? – tend to bore me. But that is the price of admission to witnessing a mind in fevered motion. Mullen is continually in the process of originating a thought, and then within a breath, revising it.

Mullen investigates the monsters of myth – the crone, no longer socially (read: sexually) useful. The wolf, a repugnant literary critic in addition to cold-blooded killer. Dr. Frankentein’s monster, who invokes the famous exchange between Pablo Picasso and Gertrude Stein regarding his portrait of her – “But it doesn’t look like me!” “Don’t worry, it will” – allowing for a pun of “Frankly, Stein.” Also populating the poetic memoir are the real monsters, recognizable in our world, the pedophile, the abusive husband, the unkind lover.

The best parts of the book, when Mullen is aiming her intellectual power and strangeness and feeling all in one place, are the chapters “Read” and “Trust.” In “Read,” she examines the fairy tale of Little Red Riding Hood. Rather than psychoanalyzing it, in a Freudian/Bruno Bettelheim kind of way, or rejuvenating it a la Angela Carter or Francesca Lia Block, Mullen takes the story at face value and blows up the nightmare quality.

“I was just noticing” – Mullen is always just noticing something – “how smart the fairy tale is about the steps that could lead us to normalize a situation both strange and potentially catastrophic.” Because Little Red endures with such savoir faire conversations that belong in an absurdist play, Mullen wonders about her psyche. She has a point: “Grandmother what big eyes you have” is quite composed.

We could see her as intrepid and bold, or cool, as we say now, but we might also, shifting the framework a little, see her as having been raised in a madhouse: educated to debate wolves, or trained (like an airline stewardess) to pretend things are just fine when they are not fine, not at all fine, not in the least.

Reading of Little Red’s strategies for coping with strange and catastrophic conditions prepares us for the next, and surprisingly, most straightforward vignette. In “Trust” Mullen describes the childhood sexual abuse she experienced at the hands of her neighbor, a fencing master who had offered free lessons, and her strategies for rationalizing that abuse in order to survive it. Whereas in other chapters it feels as though Mullen is obscuring a straightforward story, here she is striving for accuracy, and the search for truth is interrupted by trauma, which colors everything.

“His liver-spotted hands clutching, I wrote (in the first draft), that child close. Her. Me. I am not what he is holding, I wrote, to reassure myself.” By the printed version of this draft we are privy to the story in the inescapable first person. The elisions and reframing remind me of a poem in Robin Coste Lewis’ excellent book Voyage of the Sable Venus (which just won the National Book Award in poetry). Her poem “Lure” also deals with early sexual abuse, and the way Lewis frames it is in complete negation. Every line is not happening: “I am not there / (We are not in that room. / I am not sitting on your lap.” When negation is used to such great effect, it lets the writer have it both ways. The story is told, the facts are there, but with an outright refusal, a rejection of the wrong thing that happened. As if: it never should have happened, so the way I will tell it must reflect that.

“Trust” is unflinching in all aspects – the way her parents mishandled it; how Mullen changes her mind on whether she remembers the fencing teacher’s eye color; the way a younger Mullen couldn’t articulate her feelings of responsibility for what went on, as if she knew there would, somehow, be a cost. “What I began to wonder as I wrote about this (“at last”) is this: at what point did I know I would have to pay for the lessons and in what coin?” When Mullen takes up fencing once again as an adult, she finds reassurance in the fact that she can afford it.

After Mullen the child has quit the fencing lessons she chants at the teacher on the street “‘a dirty old man!’ Somehow I’d got hold of the label and could use it.” Years later in the writing of the essay, she provides a first and last name. There is power in naming things. (Naming and shaming.) I suppose that’s the attraction children have to casting spells: the perfectly worded line might transform the world.

Of course, no matter how carefully worded our spells, none of them are real. At least not the way we hoped they were. We learn this as we slowly grow out of belief. Writers believe for longer; a huge faith in the power of words, no matter how often they fail to work for us. I had a professor once describe poems written on the same subject, over and over again, as “failed spells.” If it had worked the first time, you wouldn’t need to try again. Spells by their nature require language that is not of the everyday, and what at first seems gimmicky about Mullen’s fractured word play, becomes an incantation. This memoir/poetry hybrid is doing many things in engaging the topic of grief, but catharsis isn’t its primary concern. Contradictory and hyper aware, wounded and unabashedly so, without sacrificing toughness, Laura Mullen doesn’t just have it both ways, she adopts a new way of speaking about grief in every single chapter of this challenging work.

Laura Creste is an MFA candidate in poetry at NYU, and a graduate of Bennington College. She works as a co-public relations editor at Washington Square Review, and her work has appeared in Phantom, Bodega, The Boiler Journal, plain china, and elsewhere. She has also written book reviews for Full Stop and Bustle.