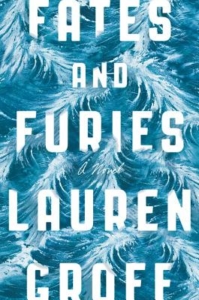 Fates and Furies, Lauren Groff’s new novel, is split into two complementary parts, each dedicated to the perspective of a member of the central couple, Lotto and Mathilde. Lotto is “Fates”; Mathilde is “Furies.” This structural conceit recalls Gone Girl by Gillian Flynn and the Bridge novels of Evan S Connell. Such a conceit prepares us for a formula: part one, story; part two, story amended. Lotto’s side provides the basic facts, though even the basics are amended by Mathilde: star-struck meeting at the end of college; post-grad scrounging in New York; discovery of Lotto’s talent as a playwright; the rise to success, fame, a measure of wealth; harmony; no children. We expect such halves to intersect and interlock, but we also expect the second half to illuminate the dimmer corners of the first. In moving on from “Fates” to “Furies,” a quotidian rehash of events won’t do. As Gone Girl showed, the goal is to destabilize the reader, force him or her to reorient to a new reality. Groff delivers: we do lose our footing. “Furies” is a furious revision, not merely a cozy revisitation.

Before I could turn an eye to the well-oiled cogs and wheels of structural clockwork, though, Groff’s sentence work gave me pause. I had trouble swallowing some of the showier language. These pyrotechnics give the book lyrical seriousness and gravity, but they also look like writerly ostentation. On Page 1, for instance, Groff describes the ocean “tonguing off their flesh and rolling their bones over its coral molars in the deep.” It’s not that I’m immune to lyrical language — I too feel the satisfying rumble of those o-notes, the roll and bone and coral molar, the tongue-taps of those l’s. And even such decadence has some narrative justification: we’re mostly in the point of view of Lotto, gifted with language, a soon-to-be playwright, and an actor. It’s easy to imagine an anxious thespian backstage reciting “Roll their bones on coral molars.” Let Lotto have his flair. But Groff’s language here feels too much like authorial handwaving. Do you like me? it says. Sure I do, I say, embarrassed. But my complaint wilted and softened under the steady wash of lyricism, a relentless flow: “The creamy unfurl of a contrail in the darkling sky.” Really? I say. Yes, really, says the novel, now annoyed, and we march on. This is the chosen mode of Groff’s novel: over-the-top-ness. She is not afraid of linguistic grandstanding, and the steady flow of musical language, overripe metaphors, and sentences built to wow is simply part of this novel. And Groff does have a reason for this bubbling font of lyrical writing: both Lotto and Mathilde are writers of a sort, soon to establish themselves in the New York theater scene. When we occupy their heads, then, overly lush and dramatic prose is narratively justified.

A better reason for such grand language is that, as the title suggests and the novel substantiates, the novel is divinely proportioned. Though not set among the gods on Olympus, they preside over this tale, perhaps watching it unfold through their viewing portal. A Greek chorus delivers bracketed blips of omniscience. Thus, Groff gives herself a generous budget for histrionics of language. If it’s guilty of excess, well, recall the wailing and breast-beating, the hair-pulling and eye-gouging of the Greek tragedies. It is this feature — the dramatic scale of Groff’s language — that won me over in the end. Who am I to tell her to rein it in? Sure, Groff could have written a leaner, cleaner book, eschewed the decadence and ambrosial coating. But Groff is treating the lives and marriage of Lotto and Mathilde as something world historic, something mythic—humans reaching for the divine through language. To do it any other way would be small potatoes, trite. After all, this is a novel about love, a subject that often strains our vocabulary and tests the range of speech. So let Groff reach a little.

Groff’s novel has already been compared to Gone Girl. This may seem like a slight, considering the pulpy briskness of Gone Girl, but it is not. Gone Girl is damn good; it too gave narrative weight to both its protagonists, serving as a lesson in how to do the half-half book: step one, write the first half; step two, take the first half, trample it, set it on fire. As in Flynn’s book, Groff’s Mathilde is not who she says she is — not what we thought. Flynn gave us the turn we wanted, but alarmingly early: we had to sit with it for too long, like a bout of indigestion on a transoceanic flight. That was the novelty and fun of Flynn’s book: thrillers play the endgame, but her twist came early, and Flynn found energy in keeping her eye painfully trained on characters after the shock wore off. To Flynn, the explosion meant less than the fallout. Groff understands this, but she seems to delight too much in the explosions. In the second half, they come one after another, little detonations of what we understood to be true, to prove that Groff knows more than we do. Does such a tactic constitute deft plotting or a breach of contract? The more the story contorted — Mathilde proving ever elusive, un-pin-down-able — the more I felt betrayed.

What Groff is doing, then, is withholding. She is reminding us that writer and reader are not fellow travelers. Lotto, in not truly knowing Mathilde, is a bit foolish, but that indictment snags us as well: we saw her too and knew her not. To feel misdirected in fiction is satisfying, but to feel misinformed is frustrating. Still, I admire Groff’s ambition. So many lesser writers would have looked at that first half as immaculate, untouchable, sacred. But she, the desecrator, tore it apart. Such gall is more than gutsy; it shows her humility and unpretentiousness, her keen understanding that novels must take risks to be great. Even if this novel didn’t deliver the payoff, it is substantial evidence that Groff knows what makes great fiction.

The Evan S Connell duet Mrs. Bridge and Mr. Bridge — Mrs. Bridge the masterpiece, Mr. Bridge its faithful companion — is another kindred spirit. Connell was also interested in that unbridgeable gap between people. Mrs. Bridge is told in episodes that have the flavor of memories, unmoored to measured time. Time passes, but oddly, often avoiding notice and comprehension. Intimacy passes like that as well: it drifts by, but can’t quite be reached. All of these novels — Bridge, Gone Girl, Fates — agree in part with the shopworn caveat: it’s hard to know someone. So how does Groff complicate the cliché, or distinguish her work from its other treatments? She, more so than the others, seems to feel that the separation — the not-knowing, the distance, the impossibility of full unity — does not impair our ability to love. Even if we leave too much undivulged — even if we are too quick to say we know another, or too hesitant to open the doors to the important interiors of ourselves — our hearts can exceed such boundaries. Much to the delight and amusement of the pantheon, love can outstrip reason.