Now and At the Hour of Our Death – Susana Moreira Marques 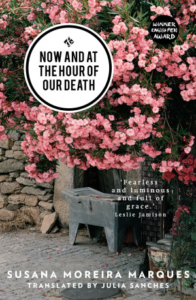 Now and at the Hour of Our Death, by Susana Moreira Marques, is an extended meditation on death and dying, written to capture her experience accompanying a palliative care team into a remote section of northern Portugal. The team took several trips in the summer of 2011. Their mission was to care for the dying and provide them comfort and companionship in their homes. Moreira Marques offers this exposition in a brief introduction, but the main text does not tell the story chronologically or using any traditional form.

Instead, the first half of the book, called “Travel Notes about Death,” is comprised of brief sections containing descriptions, anecdotes, and philosophical musings. Each one captures a moment or a feeling, perhaps a stray thought about what Moreira Marques observes:

On bedside tables, clocks mark the times for their medications. No one seems to notice the irony in having clocks at the bedsides of the dying.

She describes specific people she meets and particular scenes she witnesses, but many of the passages are more general in nature:

And at night, in dreams, the old are young and the sick, healthy; in our minds we are no more than ourselves and in our dreams the best of ourselves.

A series of very short sections, interspersed among other pieces of text, explain the title: first we read ” . . . pray for us sinners, now and at the hour of our death. Amen,” then “Now and at the hour of our death,” and finally, simply, “Now.” Over time the religious context is stripped away, and then any sense of chronology is gone, until all we are left with is the present moment. The death hasn’t yet arrived, but it is coming, and the only thing worth focusing one’s attention on is now.

Midway through the book’s first half we read:

Articulated beds, diapers, morphine, gauze, creams for cuts and abrasions, serum drips, tubes, needles – illnesses come with practical problems that need solving; and death is chiefly a physical process. There is little that is literary about death.

This passage ends on a startling note, nestled as it is in a book that does, indeed, find the literary in death. But the fragmentary nature of the book encourages us not to put too much weight on any one passage, and instead to read this sentence in the context of many other sections that explore the relationship between death and the literary. The book’s opening lines introduce us to this theme:

There are things that can’t be written about as they have been in the past. Something changes. First the eyes, then the heart — or senses, or whatever our ancestors called the soul — and, finally, the hands.

It remains unclear exactly what the “things” are that can’t be written about in old ways, whether it’s the body as it heads into death, or whether it’s death itself. But, regardless, from the book’s outset, Moreira Marques declares the necessity of writing about the physical in a new way. For her, the experience of witnessing death calls out for the writer to leave conventional ways of writing behind.

Books about death are often grief memoirs that tell one person’s story at length, complete with fully-realized characters and scenes, for example, Joan Didion’s The Year of Magical Thinking or Meghan O’Rourke’s The Long Goodbye, or they might be a deeply personal contemplation of one’s own mortality, such as Julian Barnes’s Nothing To Be Frightened Of. But Moreira Marques captures something essential about death in her book’s first half by touching only lightly on the specifics of the people she encounters, and rarely mentioning herself. Instead, she moves quickly back and forth between concrete observations of her journey and abstract meditations on death. This movement gives the abstractions a grounding in reality, while revealing the universal elements of particular details. Moreira Marques herself is a gentle presence throughout, strongly felt as a guiding consciousness but never intrusive or attention-seeking. The focus is always on what she sees, not on herself as the seer.

She summarizes the aesthetic of the book’s first half in the section entitled “Survival Guide,” where she advises, “Think of death in detail. Don’t think of the whole.” Her disconnected thoughts and bits and pieces of loosely-linked text embody her resistance to wholeness. She won’t tell us a story with a familiar narrative arc. Her book has “characters,” but they are characters she purposely creates in order to help her manage emotion: in another “Survival Guide” section she exhorts herself to “Make people into characters” and “Don’t stop crying over characters.” Literary constructs such as narrative and character can provide consolation, a method of processing and recording a difficult reality, but she implies she wants to keep the artificiality of those constructs in mind.

In the book’s second section, she goes deeper into particular stories with three “Portraits.” She writes about Paula, a woman in her forties facing the prospect of leaving her husband and children behind; João and Maria, a couple who have lived into their eighties but have had to leave a beloved country behind; and Elisa and Sara, two sisters who are losing their father. Even here, although Moreira Marques draws on the familiar form of the character sketch, she takes it in a new direction: she describes these people’s situations and then lets them have their own voice. Each “Portrait” ends with a section where her subjects tell their own stories in their own words, which, although her method is never discussed at length, Moreira Marques presumably captured in one-on-one interviews.

Although different in structure from the book’s first half, the portraits have a similar effect: they also take us inside the experience of approaching death. By letting her subjects’ voices into the text, Moreira Marques offers the reader perspectives she cannot access herself and makes her book something of a community effort. While ceding some of the book’s space to other people’s words, she at the same time tells us more about her own experiences and motivations. We learn that contemplating one couple’s grave has led her to reconcile with her partner and later that she is pregnant. We learn what has motivated her to write the book:

Their story may not have been unique, but it was long…I didn’t know what so many hours of recorded material might be worth, but I thought of how my own grandfather always said that history is written by the rich, and I wanted to give Senhor João and Senhora Maria a right to theirs.

Again we return to the relationship between death and art. When thinking about photography and portraiture, she writes:

I’m reminded of those nineteenth-century photographers who would photograph bodies at the moment life left them, their eyes still open. These portraits would then be placed alongside earlier photographs, creating a certain continuity between the living and the dead.

This book can be read as Moreira Marques’s attempt to find this continuity between the living and the dead, in her case not in photography, but in language. Her book implies that it is art that allows human beings to approach death’s mysteries.

Moreira Marques’s use of pronouns hints at her book’s audience and purpose. She uses mostly “I” and “we,” but also occasionally “you”:

Any resemblance between these characters and real people is no mere coincidence, and it is highly likely you know someone in the same situation.

She is reaching out to readers, providing consolation for those who know someone dying and also preparation for those who don’t, for even if readers have not witnessed dying at close hand, they inevitably will. The book makes an implicit argument for the power of observing, of living alongside the dying and seeing what is really there.

“You” also appears in the title of the book’s last, brief section, “When You Come Back from the Journey No Healthy Person Wants to Take, You Will ….” This coda lists the things a person who has mourned someone’s death might experience and sounds a note of hope at the end of a somber work. Again, this is a message to the reader, but it’s also a message Moreira Marques is sending to herself. It’s a reminder that she will return from her journey into the land of the dying and will have taken something from the experience. This ending is as moving and restrained as the rest of the book. Although Now and at the Hour of Our Death is barely over 100 pages, it manages to suggest more about the end of life than many a much longer work. Its formal variety and its reticent, meditative voice beautifully guide the reader through its darkest moments.