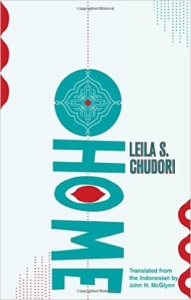 About two-thirds of the way through Home by Leila Chudori (translated by John H. McGlynn), the novel’s two protagonists discuss definitions of the “flâneur,” the figure of the leisurely walker. Dimas Suryo, an exile from Indonesia now living in Paris, offers his preferred definition to his daughter Lintang:

I am most in agreement with the explanation provided by Charles Baudelaire, who said that activity on a journey is the same as a home for the flâneur, like water for fish. Passion and work become one in the activity. A flâneur will forever be looking, and building his home in the flow and motion of movement. He might feel he has left his home, but in fact he built a home in his journey.

Thus Dimas explains his life of wandering to his daughter, and thus does Chudori introduce her central theme: how and whether one finds a home when forced to leave one’s original homeland. Can Dimas and Lintang, both flâneurs, find a home in the journey itself, or do they, in the end, want to return to — or in Lintang’s case discover — their origins?

The figure of the flâneur is generally a de-politicized one; it is typically a man who observes the world from a safe, distanced, detached perspective. This is hardly the case for Chudori’s flâneurs, whose lives have been shaped by political turmoil and who repeatedly find themselves in the center of protests and unrest. The novel tells the story of two generations of Indonesians affected by two eras of political crisis. The novel’s first section tells the story of Dimas and four of his friends who live in relative peace in Jakarta until the upheavals caused by the anti-Communist massacre of 1965. One friend remains behind, but the other four find themselves in Paris, where they eventually open an Indonesian restaurant. Dimas marries a French woman, Vivienne, and they raise their daughter Lintang, the subject of the novel’s second (and longest) section. Lintang inherits two cultures, but finds herself comfortable only in the one passed down to her from her mother. A professor at the Sorbonne sends her in search of the other, requiring her to create a documentary about her family’s involvement in Indonesian history in order to get her degree. This sends Lintang off on her own travels and leads her into political unrest in the Indonesia of the 1990s.

Home is a meditation on the consequences of the detachment that the traditional flâneur figure enjoys. Back in Indonesia, Dimas was known among his friends for his ideological neutrality:

I liked to sail in no certain direction: upstream, downstream, from the right bank to the left, pondering opinions without diving in to completely embrace a particular “ism.”

This flexibility of mind serves him well in many ways, the chief among them allowing him to adapt to an entirely new continent, language, and culture. He enjoys questions and doubts, preferring to ponder rather than to decide. Against the backdrop of the rigidly ideological battles going on in his homeland, this nimbleness of mind seems admirable. He brings this same shifting, wandering devotion to change and movement to his romantic life when he can’t bring himself to settle down with his lover Surti:

…one day, and sooner rather than later, I would have to fasten the knot of my love to something certain. But did that mean I had to stop my voyage now, I asked myself. Were there not more voyages to undertake, more ports to explore, more books to read? The ocean is vast. Even on such a long journey as ours, was it necessary to stop or take a break? When writing, I didn’t like to use periods. I preferred to use commas instead. Don’t tell me to stop. I would drown in stagnation. Don’t.

He spends the rest of the novel wondering whether he made the right decision.

Lintang faces the same dilemma as she contemplates her own romantic affairs and her vexed relationship to the concept of “home.” In part, her dilemma takes the form of returning again and again to the question of what she calls “I-N-D-O-N-E-S-I-A,” or the concept of the place in contrast to the place itself:

Suddenly, having entered a long and dark tunnel into Indonesian history, I felt the need for a lighted candle. Just as suddenly, blood quickened in my veins. My chest pounded. The word “Indonesia” – I-N-D-O-N-E-S-I-A – suddenly became something of interest for me…How was I to pluck the meaning of Indonesia from the word “Indonesia”?

She sees various versions of what it means to be Indonesian, from the successful restaurant Dimas and his friends built to celebrate their cultural heritage, to the party full of elites shocked at her presence when they discover her father is a political exile. At stake is the question of who gets to control the political and cultural narrative, who gets to decide who is welcome to call a country their home. Her documentary project becomes a way to explore this problem of cultural identity and to think about her own place in the world and what kind of home she ultimately wants. In making the documentary, she moves from being a detached flâneur to something more complicated. While filming a documentary might seem to be an extension of the flâneur role, keeping a person at a distance from the subjects being filmed, Lintang finds herself increasingly drawn into the story she wants to tell, becoming a direct participant in it instead of a detached observer.

Chudori’s novel is long and sprawling. It jumps around in time and switches its point of view from character to character and from first person to third person and back again, which feels appropriate for a book that explores connections among two generations across two continents. We see the characters from inside and outside, what they think of themselves and what others think of them. The writing is as times overwrought; there are florid passages that might not be to every reader’s taste, for example, the opening lines:

Night had fallen, without complaint, without pretext. Like a black net enclosing the city, ink from a monster squid spreading across Jakarta’s entire landscape — the color of my uncertain future.

Or descriptions of passion such as this one: “She infused my pores, my heart, and my soul with her warmth and emotion.” But the novel’s liveliness makes this sometimes overheated writing a minor flaw.

Home is a traditional novel in the sense that it tells a story of identity formation, how interior and exterior forces mold a person’s character. Its emphasis on the political context from which its characters emerge is also typical of the genre, if less commonly found. In many ways, it is an enjoyably old-fashioned read; it contains multiple romances, marriages and divorces, family drama, and political suspense. It is a novel of art and education, and also of food and its importance in cementing a sense of community and belonging. For English-speaking readers unfamiliar with Indonesian culture and history, the novel is an excellent introduction. For any reader, it’s a thought-provoking read and a satisfying examination of what it means to have and then lose and then try to find one’s home.