Beauty Is A Wound – Eka Kurniawan 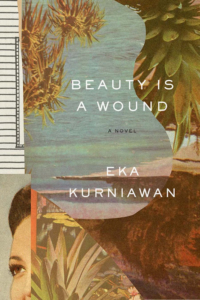 What is the shelf life of novelistic genres in the twenty-first century? The produce rots quickly, it seems to me, or is thrown out before it sours. It’s difficult to imagine what a new and enduring form might be. Literary history seems to have left us in a bog of temporal confusion. Loud, championed ephemera parade by, decades seem like eras, designations seem like jokes, and the deadest question of all — because of how boring it is — is how should the novel be. Amid all this flickering activity, it’s easily forgotten that today, for the first time in literary history, we’re perhaps not so far from realizing something truly global and lasting — not Marx’s world literature, but something different: “a world system of letters.”

I’m quoting Frederic Jameson, from his review of Mark McGurl’s The Program Era, in which he ends by noting the ascendancy of the first global genre, magic realism. Magic realism began and exploded in Latin America, having collected influences from the US and Europe, notably Faulkner, Joyce, Kafka, and Woolf. It then spread, with landmark appearances in India (Rushdie), Germany (Grass), England (Carter), Portugal (Saramago), the US (Morrison), Japan (Murakami), China (Mo Yan), Nigeria (Ben Okri), Somalia (Nuruddin Farah), and Mozambique (Mia Couto), to name a few. It traveled from the so-called periphery to the so-called center, and then continued to suffuse both. Magic realism is now so diverse and prevalent that the academic application of its name has begun to lose currency. Writers said to practice it, including several mentioned above, object to the term as reductionist. The concern takes us back to the original question: genre-based marketing labels risk reducing the individuality of books and flattening them into kitsch. But I’d like, hesitantly, to argue back: isn’t this only true if we think of magic realism as an ossified thing, something stuck, pastiche-like, to a specific time period, area, and set of traits, and not as an ongoing global development in novelistic history? Into this debate comes Beauty Is a Wound, the first novel by Eka Kurniawan translated into English.

Kurniawan is a young writer, 39, born in West Java. He’s written two novels (the second one, Man Tiger, has just come out in translation from Verso), two story collections, and a book on Pramoedya Ananta Toer, Indonesia’s most celebrated novelist, also from Java. In 2013, after Mo Yan received the Nobel, Benedict Anderson wrote an essay for the New Left Review asking why the prize has never been awarded to a Southeast Asian writer. Throughout a short modern literary history — Indonesian only became the national language in 1945, coinciding with independence — Pramoedya was Indonesia’s perennial candidate. The fact that now Pramoedya has a literary successor, as claimed by critics, blurbers, and translators alike (including Anderson), has already become the ubiquitous headline accompanying Kurniawan’s English debut.

And so here, hovering over Kurniawan’s novel, are the two binary registers of a globalized age: the global and the national. Certain features tend toward one or the other, but the novel’s tone whisks them both. The translation is done wonderfully, or at least feels like it is, the way good translations mysteriously do — I don’t read Indonesian — because it preserves the slight whiff of foreignness, never more clear than in the novel’s strange, often vulgar physicality. A character returns from the dead, eats a huge meal, and emits “a rumbling sound out of her asshole”; the frequency of sex in the rainy season produces “many tiny little embryos”; and this simile becomes possible: “He was like a bellybutton.” As the novel weaves together stories you get the sense it’s being animated not by a solitary writer but by a team — a polyphonic troupe of traveling storytellers, with sound effects people behind the curtain who keep on yanking down the giant fart lever.

The dominant tone, then, is lightness, its spirit faithful to local folk humor but also to the epic imagined worlds of Boccaccio’s Decameron and The Arabian Nights. Here too, as in these older world-historical tales, the novel tucks stories in stories, spinning them out of each other. The plot becomes wheels within wheels, wheels that pass and overlap and consume one another. This is the novel’s other form of lightness: the hectic, inventive bubbling of the storyteller. A casual expediency pervades, the proliferation of storytelling not just as content, but as style: “So one night,” or “Now here is a little romance,” or “This was a story of betrayal.” From these breezy beginnings comes a tumbling of magic realist scenes — one town, one family’s genealogy, one nation’s history, the canonized recipe of One Hundred Years of Solitude stuffed into a novel in the expanding, contracting, dialectical style of the magic realist.

The story’s frame (its big, circus-sized wheel) begins when the prostitute Dewi Ayu awakes from the dead: “One afternoon on a weekend in May, Dewi Ayu rose from her grave after being dead for twenty-one years.” She walks home and farts. The story then leaps backwards, tracing both the history of Dewi Ayu’s family and the modern history of Indonesia. It becomes a historical novel, the genre that, with a distant nod to Faulkner, is perhaps best suited to the feverish storytelling of magic realism. History envelops the characters, or the characters envelop history — it’s not the case, as with much historical fiction, that one is superimposed on or subverted to the other’s purposes.

The novel charts history through Dutch colonialism, Japanese occupation in World War II, a brief communist moment, the brutal repression of communism, and the development of a postmodern tourist industry. Beauty Is a Wound requires a whole fleet of trigger warnings — it has an astounding number of massacres, tortures, rapes, deaths and suicides — and yet it’s all carried off with the tone’s same curious, fast-paced lightness. Narratives rush on, and historical tragedy never settles, never acquires density. The book’s back cover perceptively alludes to Gogol, and this lightness is one of its most Gogolian qualities. Characters face deep pain but their author seems to have already moved on, orchestrating the next tale from above.

Kurniawan likes playing with transitions, pretending to continue a thread while redirecting the novel to new territory. Beginnings of books can be loud and ends too neat. This novel might be guilty on both counts, but books are more their middles than anything, and Beauty Is a Wound stacks its middle so wonderfully and inventively and fully you begin to lose interest in whether ends tie up or not. Until the conclusion. The final movement pulses with the unifying desires of detective fiction, or of Hitchcock movies. Things suddenly must be tied. Loose threads spawn backstories, a bit character from the book’s opening returns as a ghost who has manipulated nearly everything (Gogol, yet again), and the book confesses its two governing ideas: beauty is a curse, and colonialism is a curse. Too neat, perhaps, but also layered — things become both personal and historical, and a shadow is cast back over the rest of the novel: the type of end that forces reevaluation.

What does Kurniawan’s book gain from magic realism, or magic realism from the book? It’s — at least to English readers — a new local hybrid, blurring Indonesian folk art with a global style: a further tack on the map. It helps us see more clearly the sharpening of a world-spanning constellation, how literary forms travel, become imported and exported, dock and assimilate and gain complexity in a time when borders open to capital, close to people, and do something murkier with ideas. As for the book, the form makes possible political allegory, the literal haunting of history; it gains form, I want to say, but more to the point it does what’s so fascinating about magic realism — taking influences from all across literary history and showing how within them lay the possibility for a new way of writing and thinking. Borges, in his essay “Kafka and His Precursors,” writes about how writers construct their own traditions, therefore holding up a two-way mirror, so that past writers soak through writing in the present, but also today’s writers invite a new way of reading the past. Here we have Kurniawan, a new star from a place English translations don’t often come from, resurrecting not just his main character, but also Gogol, Boccaccio, Chaucer, Garcia Marquez, Melville. “One afternoon on a weekend in May . . . “