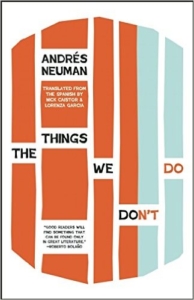 The opening story of Andrés Neuman’s collection The Things We Don’t Do presents what seems like a classic homoerotic triangulation. The narrator of “Happiness” tells us of his longing to be his best friend, who is “intelligent, self-assured, an agile dancer.” The narrator’s wife sleeps with the best friend. What initially looks like a story about rivalry and betrayal, though, turns into a brief, powerful exploration of the extreme end of the desire to become another. Even the wife’s infidelity is not a betrayal but rather her way of supporting her husband’s desire, a kind of hyper-fidelity to the image he is trying to inhabit: “Nestling against Cristóbal’s muscular chest, my Gabriela is anxiously awaiting me, arms open wide.” It’s a tight, perfectly tuned story at one page long.

The best stories in the collection are similarly masterful examples of the short form, and beautiful expeditions into the nebulous space between self and other. In “The Laughing Suicide,” a suicidal narrator is thwarted by his own uncontrollable laughter every time he tries to kill himself. In the fantastic “Mr. President’s Hotel,” an anonymous president is pursued by a mystery figure that follows, or rather precedes him from hotel to hotel, hiding messages in the guestbook that become more and more sinister. In “The Innocence Test,” a narrator who begins by telling us that he likes being questioned by the police — “We all need someone to confirm to us that we truly are good citizens” — ends up in a traffic stop, where his overeager compliance sends him to an end that probably should be ironic but, well, isn’t these days. These short, trenchant explorations of moments in which other realities penetrate the quotidian, or the boundary between the real and the unreal, truly merit comparisons to Julio Cortázar or even Borges. The translation by Nick Caistor and Lorenza García honors the sparse, controlled tone that is so essential to these stories.

One of the most seductive stories is “Juan, José,” an alternating series of journal entries written by a therapist and a patient. At first it seems clear which is which — but slowly and methodically, that certainty gives way to doubt. The interweaving of the two characters’ observations of each other and themselves is excellent, as are the jokes around therapeutic clichés. Both men obsess over their relationships with their fathers. Each is troubled by the other’s continued certainty that he is the therapist; the anxieties about delusion sound credible on either side. Juan writes, “The patient insists on asking again and again about my own parents, interrogating me . . . José has begun to analyze (I let him think he is analyzing) . . . It is as though, transferentially, José needed to share the burden of his orphanhood with his interlocutor.” José writes, “Juan continues to insist on behaving as if his parents were alive . . . When he contradicts himself in this matter, I try to give him a knowing look. He interprets this as my agreeing with him.” This story and others brilliantly invoke the precarity of knowledge, the oiled slide from certainty to doubt as, for instance, we lose grip on which of these figures is healthy and which is sick, who is trustworthy and who is not. If we live in our own narratives of selfhood anyway, does it even matter?

The final entry is “Bonus Tracks: Dodecalogues from a Storyteller.” These aphoristic observations of the short story form echo Horacio Quiroga, generally considered the father of the short story genre in Latin America, whose “Decalogue of a Perfect Storyteller” gives guidelines for writing the kind of tight, sparse short fiction that characterize both his and Neuman’s work. Many of Neuman’s statements are incisive observations of the form, but he also plays with them: “The short story has no essence, only habits”; “The short story is pursued by its structure. That is why, every so often, it is pleased when it is dynamited”; “A decalogue is not set in stone, or necessarily applicable to others. A dodecalogue even less so.” Some of Neuman’s best work is in the final sentences of the stories — but I won’t instantiate here, just let you wait for them yourself.