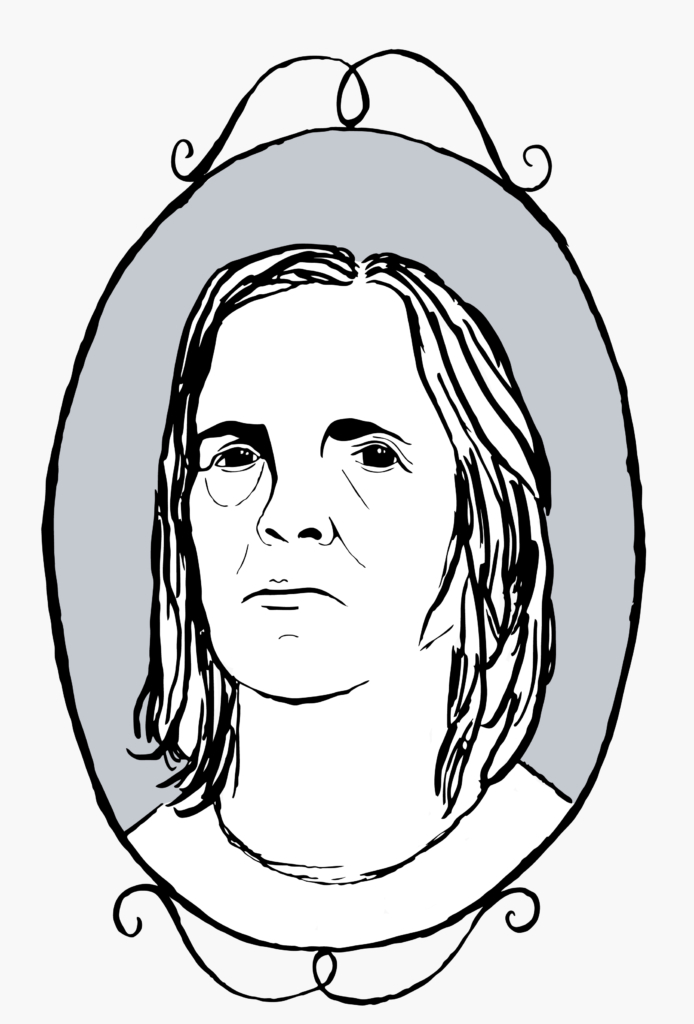 Eileen Myles’s Chelsea Girls is being reprinted. If you’ve never heard of it, I don’t know what to tell you: you’re probably more likely to find her books Inferno (2010) or Chelsea Girls (1994) in a hip kid’s dorm room now than Tropic of Cancer or whatever books young people read when misogyny was fashionable. (Chris Kraus said in The Nation once that Myles has the “audacity of Henry Miller, without the protection of his bravado.”) Anyway, Ecco is bringing it out again in September, so this is as a good time as any to interrogate Eileen Myles’s tough dyke persona, which sticks out amid the culture’s current interest in reclaimed femme performance like a behind-ear cigarette in a bouffant hair-do.

In 2001, Holland Cotter in the New York Times acknowledged that Myles was thought of as the last of the New York School, the gang of Ashbery and O’Hara and Koch and Guest and Schuyler, but that “if Ms. Myles’s name is unknown to many readers, that’s no surprise.” Indeed, at the time, “she [had] no university affiliation nor, for that matter, salaried job of any kind.” That article was written for the publication of Cool For You, technically Myles’s first novel, and it only mentions Chelsea Girls once, in half a sentence. Things have changed, a lot — few people aside from professors and intense grad students see Eileen Myles as primarily important because of her part in a historic New York poetry scene. Now people know her as the only sexy literary butch in town, and Chelsea Girls as her crowning laurel.

The hero of Chelsea Girls is a person named Eileen Myles – Rachel Hurn in the Paris Review described Chelsea Girls as “a nonfiction novel, or a fictional nonfiction, a Künstlerroman.” Chelsea Girls is a book of interlaced stories from a life: they hang together on the rangy frame of Myles’s own biography, falling into an angular composition of extreme sexiness and general funniness. Take Judy. Judy and Eileen and Chris have become tangled into a triangular sex situation. Judy “was a consultant to an environmental outfit, she would go and look at fish factories and come back drunk.”

Things would happen like one night Judy had her whole collection of mangy men over: Ron, the lumber man, who she was always going “clamming” with tomorrow, or who was the little weasel who knew all about, what, electricity or something.

Myles writes about the banal knowledge of weaselly electricity men in the voice of the only girl in school who smokes cigarettes properly. It’s a tough-sexy cool that has a lot to do with gender performance.

Even if a sardonic person is very feminine — Dorothy Parker, say — their sardonic tone cuts across their femininity, highlighting it in turn. We expect girls to yield, to listen, to receive meaning. Wry detachment, especially when funny, rings masc because it’s about not caring. Women care about things and they care for other people, not themselves. Myles’s humor is extremely arch, because it is about things in the world being too stupid to care about (or at least too stupid not to laugh at).

Myles is the center of the world of Chelsea Girls. She really plays up the heroic shtick at times in the book. She’s the strutting good-looking hipster rolling on acid through the bar, the same way she rolls through the literary scene of New York:

Kind of a man among all these girls . . . My sense of myself as a boy, a wet strong one from outside was expanding by the moment. I would look and turn away, feeling spasms of laughter ready to rock me. I kind of snorted and lurched away, gasping, and some women heard me and stared suspiciously and then I saw my friends. I was wading toward them, splashing my drink.

But Myles’s sincerity — the truthfulness of the swagger itself — always comes through. During the acid scene she gets overwhelmed by the idea that everyone around her looks like penguins; the silliness and ultimately the integrity of Myles’s voice both come out of the fact that she stays vulnerable, stays sincere.

The wholeness of Eileen Myles comes from the authenticity of the way she inhabits her body and her nonnormative gender. She walks like the idea of Paul Newman: containing freedom inside it, or at least containing laughter at the knowledge that freedom isn’t a real thing. (Can you believe there are zero mentions of Paul Newman in Jack Halberstam’s Female Masculinities, by the way? He looks and acts like Joan of Arc in literally every film he’s in.)

Internal laughter is a through-line in Myles’s work. One night in Chelsea Girls, for example, Myles and her friends go on an adventure:

I had heard about a women’s SM bar down by the river. It was someplace that was for men most nights and for women just one . . . A really stupid looking woman sat up on the bar against a brick column with a black leather outfit covered with studs. It was so depressing. I guess I wanted to see women swinging from the ceiling with their fists up each other’s cunts and strips of flesh on the floor. I figured if I really like it I could come back alone.

Instead it was dark, cavernous and empty. On the door was a plastic ass. The place’s man name was ASSTRICKS and tonight it was called MS. ASS-TRICKS.

Do you play soccer, Tina asks.

This anecdote ends with Myles feeling very pleased at having been mistaken for a soccer enthusiast because it means she must have looked at least a little vibrant, despite being 32. The humor goes with Myles’s look. She’s lean and great-looking, immensely casual and rumpled but more at one with a pair of jeans than anybody else. In her sixties now, she has the luxury of aging gracefully only really possessed by people who don’t try. That’s gendered too. It’s a butch thing, even for straight women. Aging elegantly is the most mainstream form of the female masculine.

Chelsea Girls is hard to read in parts because some bad stuff happens to her and other girls while they’re growing up in Massachusetts, as it happens to so many humans born female, in Massachusetts and elsewhere. The rough humor in Myles’s language helps the trauma go down, however. “Rape was the first sex I ever heard of. Some girl tied to a telephone pole down by Spy Pond. It seemed to always happen in nature.” How true, how funny, how dreadful. But like she writes at one point: “I always had the last laugh. Generally mine was internal.”

That internal laughter is crucial — it’s what makes Eileen Myles so arch yet gleeful. As a friend wrote to me recently, “she balances the life = praxis = art thing in a way that’s both more solid and more joyful than just about anyone else who goes for it.” Does it matter, this confidence? Does it matter that she always seems to be thinking and laughing and envisioning internally, but carries herself like the protagonist of a book we’re all just living in? The answer to that depends on whether or not you think that being a tough-girl is complicated and important, or not. I think it is, and never more so than now.

The place where young people think through how they want to present themselves to each other and to culture, by which I mean the internet, is creaking at the seams with femme pride. This is wonderful. The existence of, say, a Tumblr account for, by, and about women who wear shimmery lipstick and the conversations they want to have is a miraculous thing. As queer ways of being sidle ever further into the mainstream, regular people are learning basic truths faster than ever before, and a lot of them pertain to the meaning of femme.

One lesson people are learning is that masculinity is no less of a performance than femininity. By that token, wearing makeup and high heels is not a deviation from the default position: it is a form of being human, a form of being fully human. People need to be taught. They don’t know. As a result of the dissemination of this crucial knowledge, the self-conscious performance of high femininity is experiencing a renaissance. Much excellent, politicized writing is being published about makeup and clothing. Many femme women are speaking in unapologetic tones about the nature of their universe. Queer femmes have been at it as long as butch women have, but because they tend to be “invisibly” queer and their identifications have not always aligned with the most influential forms of radical feminist thought, they have been often excluded from public, smart-guy conversations. Trans women, too, importantly. Now they’re making space for themselves in conversations about queerness and gender performance, and queers and straights alike are listening. Thank god this is all happening.

At the same time, I’m worried that some young people don’t realize that it is also cool and okay to be a queer woman who feels actively alienated by and wants to reject the gestures and apparatus of high femininity. You can respect a makeup writer and you should take their work seriously, but you don’t have to pretend to share her interests if you don’t. Not wanting to embrace femmeness can happen for all sorts of reasons and has all sorts of social repercussions, both positive and negative. Butch culture is responsible for repeated investments in biphobia and femmephobia, for example: it is right that this kind of stupidity should be stigmatized. But the cultural operation of femme reclamation is extending in a lot of different directions at once, and it is operating chaotically. The backlashes against the celebration of the “chill girl,” against minimalism, against classically masculine literary styles, against body fascism: these are all tendrils of the same project, but they’re not all being directed by the same conscience.

Yes, the underlying project of all these backlashes is to inform young women that being derided for the femininity of your appearance, speech, body, writing, or affect is not acceptable. But where is the glamor of the female masculine in the internet culture of the young? Where is the space in this new culture for performing it, and why is Eileen Myles literally the only living female writer with macho swaggering cool successful enough in mainstream literary terms for straight people know about? Leslie Feinberg got some nods by dying recently, which hardly seems worth it as far as prices go. I’m not sure what the answer is, but I’m worried that femme-mania is narrowing down the spaces for female masculinities to flourish. It’s sad that she’s alone up there, but we’re lucky to have Eileen Myles, leaning coolly against a wall and looking down her chin at us — even if she’s the only one.

Josephine Livingstone is an academic and writer in New York.