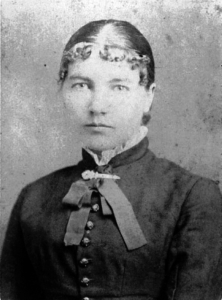 This summer, over 200 Little House on the Prairie fans (aka “bonnetheads”) descended on Brookings, South Dakota, for the biennial Laurapalooza conference/fan convention. They slept in dorms and went without in-room wifi for three days! They took a bus (a bus!) down the Laura Ingalls Wilder Highway for 40 miles to De Smet, SD. They rode in a wagon across the prairie on the actual Ingalls homestead, where the actual people slept, ate rhubarb, hitched up horses and buckled on hoopskirts.

Nancy McCabe, author of From Little Houses to Little Women (University of Missouri Press, 2014) and Emily Anderson, Little: Novels (Blaze Vox Books 2015) met at Laurapalooza 2015. Since they are both writers whose work engages with Little House, they decided to have a conversation about Laurapalooza.

Emily Anderson: How would you explain Laurapalooza to Laura Ingalls?

Nancy McCabe: I guess I would explain it in terms of the community events in the books, particularly Little Town on the Prairie — I’d tell her it’s like a spelling bee/community sing/recitation/town play or show, except instead we get together and talk about her books. I’m afraid she might be horrified that people are wearing sunbonnets, since she hated hers so much, and she might be somewhat bemused at our celebration of pioneer life accompanied by power point presentations and tweets.

I like thinking of Laurapalooza as a spelling bee/recitation — something that might happen in the books! One of the things that comes through so strongly in the novels is how the Ingalls family uses culture — songs, poems, prayers, stories — to help them endure difficulty and make drudgery feel more meaningful. In other words culture in the novels has a distinct social function.

Laurapalooza makes me wonder: what kinds of contemporary “drudgery” and “difficulty” are made more manageable by, say, putting on a bonnet and heading out to Lauraplooza? What social function is being served?

It can be challenging to be both a fan and a critic at an event like Laurapalooza. In From Little Houses to Little Women, you speculate:

“If I just can’t buy into the myths, if I’m going to be such a curmudgeon about them, am I crashing someone else’s party just by being here? Is this the source of my constant unease, this feeling that if my thoughts were transparent, the proprietors of these places would boot me out the door? Am I like an unbeliever going to church just to poke holes in others’ belief systems, or a sneaky relative visiting the cousins only to pass on vicious gossip about them to the rest of the family?”

In general I’ve learned to be comfortable with my contradictions, with both the part of me that is a devoted fan and the part of me that is snarky and critical. I sometimes felt uncomfortable when I’d be talking to someone and they’d suddenly start espousing a political view that was totally antithetical to mine, which jolted me back to the reality that we were from very different backgrounds in many cases. But I liked that, too. You don’t usually get such a range of opinions at a typical academic conference.

There was a moment when several people I was with expressed frustration and impatience when the issue of race came up. I was bothered and left the conversation at that moment. But the next day I asked some of those people why they’d been so vehemently opposed to discussing the portrayals of Native Americans and African Americans on the prairie, and they said, we get it, we’re tired of talking about it. As the parent of a Chinese-American daughter, I don’t think we talk about these things enough. I see too much white denial of the existence and influence of racism, too much refusal to really engage with it.

Other than that, I was very comfortable at the conference. It was fun being around people who were passionate and curious readers.

Laurapalooza was my first-ever Laura event. It was a super hot day and the cicadas were loud and I got lost walking around in these interlocking parking lots and couldn’t find registration. Then, at last, I spotted a bonnet! I ran right up to this woman. I was wearing my own floppy pink bonnet and expected we’d both start pointing at each other and laughing, I felt so damn silly. And happy! But she just very politely gave me directions. When I got to registration, I saw lots of prairie costumes but no giggles. Far-flung friends were hugging and remembering the last conference and I realized, wow, I’m new at fan culture and have a lot to learn.

Like you, I thought a lot about race. I was uncomfortable celebrating these books around so many other white people — white women, to be specific. Little House has meant many things to many people, and many things to me, but the books are also heartwarming stories about genocide. Little House figures the genocide of Native Americans as a sad but necessary loss, something bittersweet and equivalent to “growing up.” My love for these books horrifies me.

So sometimes I’d feel lonely and angry. And then suddenly I’d be whisked away into enchantment at the sight of a British edition book cover or a “WWND” (What would Nellie Do) T-Shirt, or I’d start nodding with all the knowing nods in the audience as we remembered reading together, and that felt great, like a kind of magical communion. But I’m so suspicious of these feelings. It’s not the books, or the event, that horrify me — I horrify me.

Did anything happen that surprised or moved you at Laurapalooza?

I loved the spontaneous way things happened — like suddenly a group of people accumulated out of nowhere and I’d go off to dinner with them, or I’d find myself walking down the street with a bunch of people to see the location of the land office where Pa filed his claim.

One night in the dorm, Laura Keyes showed us a video of how she dresses as Mary Todd Lincoln. Another night at dinner, I was with a group who had a really great discussion of Anne of Green Gables, and yet another time, I had a long talk with a Japanese participant who loved Laurapalooza and feels deeply connected to the Little House books but shared some of my concerns. Hearing her perspective was very moving and enlightening.

For me it was Twitter! I learned how to use Twitter, and why it’s better than Facebook, at Laurapalooza. Several bonnetheads were live-tweeting the event, which was a great way for someone who felt a bit shy to participate in the conversation. Many people tweeted from points on their Wilder-esque journeys to the conference, so I got a glimpse into road trips from across the US. It was beautiful to get an overview of a shared pilgrimage that was distributed across the continent and the world

I came to Laurapalooza with my friend Jen Paillet, who currently lives in Morocco, but once wore a Laura costume for Halloween and is an adventurous spirit and all-around good sport. We used Twitter to lure a bonnethead to us at an off-campus bar by using the conference hashtag #Laurapalooza15. We met a delightful fan who gave me advice about using Twitter to market my book. Once I saw that Twitter could make beers happen IRL, I was hooked, and spent the rest of the conference holding my phone under the brim of my bonnet so I could tweet “view from a bonnet” pictures. 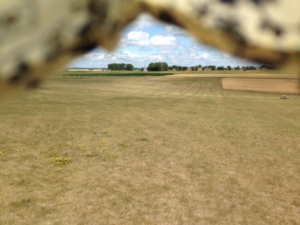 Emily Anderson is the author of Little:Novels (Blaze VOX Books 2015), which erases each of Laura Ingalls Wilder’s Little House novels to create an alternative series. Her writing has recently appeared in Harper’s, Conjunctions, Fence, Tarpaulin Sky, and Requited. You can follow her on Twitter at @little_novels.

Nancy McCabe is the author of four memoirs. Her work has won a Pushcart and been listed six times in the notable sections of Houghton-Mifflin Best American anthologies.