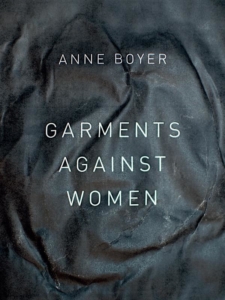 These are the feelings Anne Boyer draws out in Garments Against Women, a book of mostly lyric prose that pushes up against the boundaries of genre. “Her misery doesn’t require acts. Her misery requires conditions,” Anne writes in the opening pages, and even before she tells us, we already know: “How is capital not an infinite laboratory called ‘conditions’? And where is the end of the electrified grid?” It’s so ordinary it should be obvious, but this is the public secret Anne Boyer insists on talking about, what everybody knows but nobody admits.

Drifting through thrift stores and garage sales and shopping malls, Garments Against Women registers the low-level alienation and depression that pervade the contemporary affective landscape. It’s the inconspicuous, the intimate, the quotidian forms of violence this book tracks relentlessly — the kind that demand the reproduction of life while simultaneously rendering life impossible. Shifting how we talk about the most common means of suffering, Garments Against Women reconstitutes individual suffering as social. It’s a perspective that interrupts the numbness generated by a grueling system of exploitation by allowing us to see personal problems as structural.

In these small fragments of everyday life we get something between theory and memoir, between poetry and newsfeed. Moving between the analytical and aphoristic, Garments Against Women gives us rigorous critique alongside wry humor, “The Animal Model of Inescapable Shock” alongside “Ma Vie En Bling: A Memoir.” When Anne Boyer is not writing she is not writing Leaving The Atocha Station by Anne Boyer, but she is also not writing a memoir because memoirs are for property owners: “I will leave no memoir, just a bitch’s Maldoror.” There is trauma, which is the cause of so much not writing. There is spam from Versailles. Anne is at her sewing machine, like Emma Goldman, setting sleeves, waking up each morning to attempt a wearable garment. She is waking up with the desire to read everything. She is fastidiously taking notes.

A treatise on happiness which is actually a record of its opposite, Garments Against Women is what confession looks like when language “prefers to live on the internet,” when “there is no such thing, really, as the public ever again.” The personal leaks into and out of the formal.

“There is a risk inherent in sliding all over the place. As if the language of poets is the language of property owners. As if the language of poets is not the language of machines,” but I keep sliding all over the place. My memory is shaky, my grasp of history uneven. I need to keep checking my notes. When Anne imagines writing a book called A Woman Shopping (“If a woman has no purse, we will imagine one for her”) I think of Barbara Loden as Wanda, fumbling with her purse, drifting through rural Pennsylvania, leaving everything for nothing, or with the kind of desperation of a woman just trying to survive. A woman drifting through the street will still look like a woman shopping, though a flâneur is free of purses. “Why don’t you do something about your hair?” Mr. Dennis bullies Wanda, “It looks terrible.” So she goes shopping and buys a hat that looks more like a wedding veil.

What’s the difference between wide hope and desperation? I was trying to hold everything together, all at once. When I say my essay failed, I say it failed because I didn’t listen to my horoscope: “Feeling on the fence about something? Well, pick a side. You can’t be wish-washy.” I am wishy-washy, which means I want it both ways. I keep sliding all over the place, looking for better language.

There are at least two types of people in the world, Anne writes in the early pages Garments Against Women: The first feels at home in the world, the second seems to be made of a different type of substance, one that repels the world at every moment. Do I really need to tell you which type of person I am? Wanda too, I imagine, is made of this second type of substance, which is maybe just a second kind of fortune.

The truth is I was sick, I was bedridden, I had no desire to get better. I did not want to talk about it, so I did not talk about it. Didn’t my exhaustion, my depression, my inability to walk down the stairs of my apartment and into the sunlight, point to all the ways capital exploits our inner reserves? I have been through enough schooling to know how to ask a smart question, but saying capitalism is the problem doesn’t help me get out of bed in the morning.

I mean I was sad and thought that was okay, even though I knew better than to let the difference between “I feel terrible” and “This feels terrible” become an immobilizing refrain. I was irresponsible, or maybe not. I read a lot. I sought intellectual refuge in the work of Sarah Ahemd, who has become a kind of patron saint of bad feelings. I saw myself as part of the tradition she delineates: the feminist killjoy, the unhappy queer, the angry black woman, the melancholy migrant. But “even heroic refusals often aren’t that heroic,” Garments Against Women reminded me. I felt my sadness to be in me, deeply, at the same time as I understood it to be outside of me, generated by the world. There is no easy absorption.

It’s in recognizing this inability to cohere to the world — this inability or refusal to adapt to the conditions that make both life and literature nearly impossible — that Garments Against Women is indispensible to my ability to actually believe in it. “After all,” writes Fanny Howe, “the point of art is to show that life is worth living by showing that it isn’t.” It’s at the precise moment of their impossibility, or failure, that both life and literature become possible again.

It’s Anne’s daughter who asks us to imagine what would happen if the world had no things in it — no cars, chairs, or cars. “People would make things,” she decides. “We would make things with trees and dirt,” which is another way of talking about the difference between being and doing, when surviving is, in and of itself, a form of accomplishment.

What do we need to survive? is one version of the question. “I feel like I read some, but still there are so many things of such importance about which I have never found a book,” is another. Reading helps, but communing with ghosts is deeply exhausting. Garments Against Women may not offer us a way out, but it does enable a possible horizon. I mean: Things change. When the forms available to us — garments or literature — are not enough to fashion our survival, we need to find new ways of being alive. Rousseau’s little girl throws down her needle. “Everyone was very kind and wanted to help, but in order to be clear about it, I will tell the story like this: it appears that she refused the ladder, but in truth she refused the rope.”