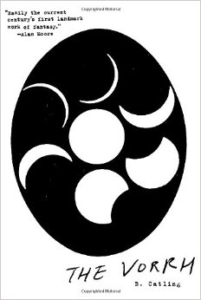 Brian Catling’s The Vorrh is a sprawling fantasy set in colonial Africa, populated by historical figures such as surrealist writer Raymond Roussel, Edward Muybridge, Sir William Gull, and Sarah Winchester. And then there is the Vorrh itself, the ancient, eldritch forest that dominates the novel:

For years, it was said that nobody had ever reached the centre of the Vorrh. Or, if they had, then they had never returned. Business expanded and flourished on its southernmost outskirts, but nothing was known of its interior, except myth and fear. It was the mother of forests; ancient beyond language, older than every known species, and, some said, propagator of them all, locked in its own system of evolution and climate.

Much of the action of the novel takes place in the town of Essenwald on the edge of the forest, a town whose compound name of “essen” (to eat) and “Wald” (forest) already indicates that much of what enters the Vorrh may never escape (or at least, may only emerge utterly transformed). “Essenwald is a library to the forest, an appendage. It was attracted here when the Vorrh was already ancient,” another character tells Roussel before guiding him through the forest. The Vorrh may contain Eden within it, or the first man. Saints may live in the Vorrh; monsters certainly do. Most of the characters are not just fictional, but fantastic: from the robotic nursemaids that raise the Cyclops Ishmael, to the child-witch Irripineste and Peter Williams, the man who shapes her body into a bow to carry with him through the forest, to Cyrena, the woman whose blindness is inadvertently healed by Ishmael under highly unusual circumstances.

The Vorrh opens with Peter Williams following the orders of his dead lover Irripineste to form her corpse into a longbow that he will use to carve his path through the Vorrh. Meanwhile, Tsungali, who has previously crossed paths with Williams during their involvement in Tsungali’s people’s uprising against the British colonizers, is hired to kill him. In Essenwald, Raymond Roussel arrives with his entourage and meets a beautiful young man who promises to escort him through the Vorrh, and the Cyclops Ishmael is “liberated” from his robot nursemaids by the debutante daughter of local industrialists. Each finds themselves drawn to the forest, where their paths cross with each others’ and with a host of repulsive and fascinating secondary characters both human and not.

Reading The Vorrh may leave you with a strange sense of unease, one not entirely sourced in the body horror and ominous vegetation of the novel itself. The Vorrh joins the numerous works of fantasy of the past decade that have approached the history of colonialism and its attendant horrors, such as N. K. Jemisin’s Inheritance series or the Weird fiction of China Miéville. Many of them have worked through lush, decadent language, horrifying and glorious by turns; The Vorrh is not unique in this regard, either. The sense of unease is not precisely rooted in any of these factors, but rather in what, at times, seems to be an uncomfortable divide between them. This comes out most strongly through the chapters centered on photographer Edward Muybridge, which seem largely disconnected from the main narrative, an intriguing but otherwise inert appendage. Set some thirty years before the rest of the novel, the chapters are intermixed with the rest of the storyline. Yet unlike the rest of the chapters, which focus on specific storylines whose threads weave together at various climactic moments, the characters of Muybridge’s plotline never cross paths with the residents or visitors of Essenwald. Tsungali’s righteous fury at the European colonizers who have stripped his culture bare is thrown into sharp relief by Catling’s characterization of Josephine, the beautiful and mute African psychiatric patient who is described in overtly sexual, exotic, and animalistic terms during her encounter with Muybridge in London.

It could, of course, be argued that the descriptions of Josephine are a result of their narrator, that Edward Muybridge as a historicized figure characterizes Catling’s writing of the characters he encounters, but that argument falls short when confronted with the events within his plotline. Josephine’s violent assault on Muybridge is isolated from the rest of the plotline, and seems to have very little relation to it beyond the possible thematic associations with the Cyclops Ishmael’s sexual development. Ultimately, it remains unclear whether Muybridge’s story affects the rest of the plot at all. Yet many of the plotlines are masterfully interwoven, and characters’ actions — however small — have ramifications that reverberate past their immediate surroundings. Dreamlike and horrifying, The Vorrh is permeated with an ominous power despite its flaws.

Get in Trouble – Kelly Link