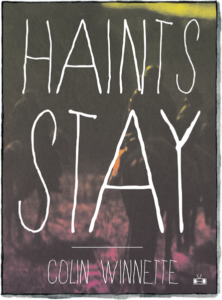 “You put your hand in a lake, withdraw it, and the surface moves for a bit,” said Sugar, “it snaps back into place or it ripples on and on. Your involvement ends the moment your hand leaves the water.”

By the time Sugar says this to Bird, about a third of the way through Colin Winnette’s Haints Stay, enough has happened to them that this sentiment seems demonstrably untrue. Sugar and his brother, Brooke, are killers for hire, and they have been set upon by lawmen, murderers, cannibals, and gangsters, not to mention the sudden and unexplainable appearance of the boy Bird between them in their camp one night. Perhaps control ends quickly, as Sugar says, but those ripples grow and return as waves to capsize the boat. For instance, random happenstance brings Bird to Brooke and Sugar, and a similarly random occurrence tears them apart shortly thereafter. And as the characters diverge, so too do their narratives, but their actions and choices continue to affect each other in such a way as to directly contradict Sugar’s belief in his professed ability to abjure responsibility.

Haints Stay is dark, and bloody, and violent: raw and cutthroat and still capable of reducing you to helpless snickers. Sugar and Brooke may be killers, but to the disappointment of the residents of Wolf Creek, they are not famous ones. This leads to one of the funniest scenes in the novel, in which Sugar goes into labor in the town jail while Wolf Creek’s doctor gets plastered in the bar down the street, monologuing to the children and townsfolk who have gathered to watch him fall apart. The townsfolk, for their part, are unimpressed:

The doctor shook his head, his bottle. “No, no,” he said.

“Brooke and Sugar,” said the doctor.

The small crowd was silent. Then they began to murmur. Finally, one of the men said, “Who?”

For all the hilarity of the doctor’s babbling drunkenness and the crowd’s confused ignorance, this scene is also one of the most distressing. The doctor, for his part, is horrified by Sugar’s murderousness: to him, Sugar is an “abomination” and he is giving birth to the “heinous child of two murdering sons of bitches.”

Therein lies the crux of the novel, one of the many ways that Winnette disrupts easy assumptions about identity and character. Sugar is a man because Sugar has never laid claim to the title of woman, and is recognized as a man even by his antagonists (which describes nearly every other character in the novel). Brooke has been a husband because he has laid claim to that role; other characters lay claim to the roles of parents, daughter, son, or husband and wife, identities that are not any less real because they are performed and not legal or biological. At the same time, however, these identities are rarely more than products of circumstance, and very few characters maintain them once they have left the physical proximity of the other person described by that relationship. The exception to this is Brooke’s relationship with his brother Sugar, which is preserved despite physical distance. Unlike that relationship, which is claimed and performed by both Brooke and Sugar, Sugar’s relationship with his child is much more tenuous. Though he attempts to claim and protect the child, these attempts are repeatedly forestalled by the echoes of Sugar’s past actions. And so even if Winnette’s riff on the flexible masculinity of the Western gives his characters a chance to claim a space for their own identities, that space remains one carved out by violent action, and vulnerable to all that entails.

The characters of Haints Stay find their responsibility within the relationships and identities they claim, deserving or not as they may be. For some, in the end, this brings a measure of peace or belonging, however precarious. Past the violence, past the blood, past the cruelty, wait a sunlit porch and a warm bath, and the promise of a friendly drink once they return.