How to Exploit a Dead Writer 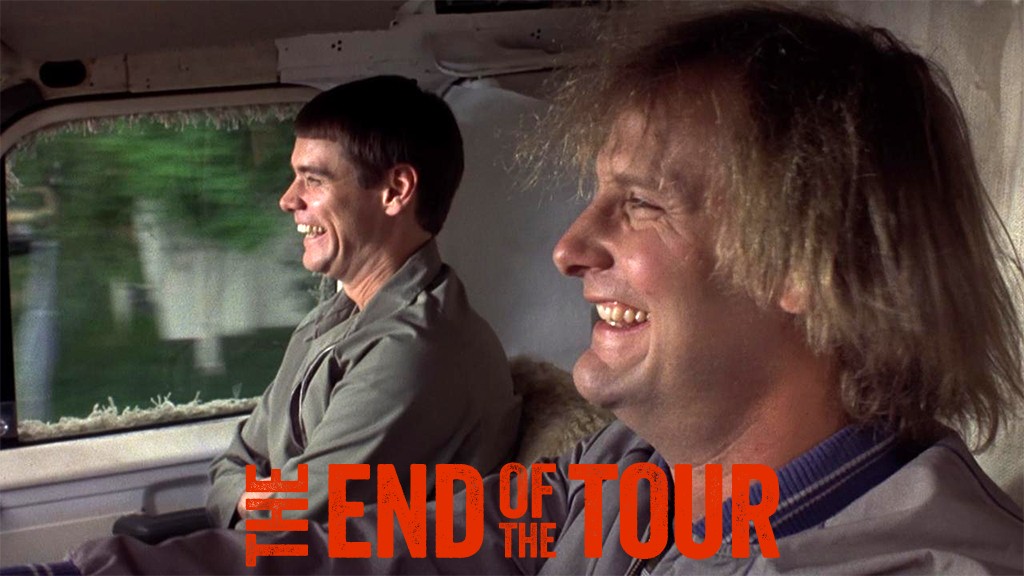 I’m a fiction reviewer who made a mistake and went to a movie about a novelist. Director James Ponsoldt’s The End of the Tour offers itself as a respectful homage to and elegy for David Foster Wallace, but exploitation mars the film from its origin through its casting to the final product.

According to a statement from Wallace’s widow and the Wallace Literary Trust, the estate never agreed to a movie being made about him, attempted to discourage the production, and it was filmed without their approval. The estate asserted that David Lipsky, author of the book on which the screenplay is based, was never given permission by Wallace to do anything more than publish a profile from the interviews they did in 1996. Not content, after Wallace’s suicide in 2008, with stretching out into a book their few days together, Lipsky sold out Wallace and the property to the movie’s producers. Although Ponsoldt claims to be a great admirer of Wallace and his work, he could not be dissuaded from creating a movie that Wallace’s widow and his editors said Wallace would have hated.

The further indignity is that screenwriter Donald Margulies and Ponsoldt have created the kind of commercial entertainment that Wallace’s best work critiqued. The movie depicts the conversations between the journalist Lipsky and Wallace on the last five days of his book tour for Infinite Jest, a massive unconventional novel that has at its center a secret film cartridge so seductively entertaining that anyone who views it dies because they can’t pull away from it. Infinite Jest is no such entertainment. It is comic, yes, and includes numerous eccentric characters, but its ideas, digressions, rapid scene shifts, coiling sentences, footnotes, and mass make it a work that requires work, a novel that many readers found they could pull away from. As in Pynchon’s best fiction, this combination of low and high, sophomoric and professorial, pleasure and pain is what makes the Infinite Jest an original literary achievement.

Although The End of the Tour includes numerous shots of Infinite Jest, the movie is content to be a conventional, superficial, easy-listening, and, ultimately, sentimental entertainment. Lipsky’s book has some profound and revealing quotations from Wallace about writing, along with a lot of banal small talk, on-the-road guy banter, and descriptions of Midwestern settings, but these high-concept quotations are mostly left out by the screenwriter who may have feared they would be too writerly, too word heavy for film-goers, too much like Wallace’s fiction. Listening to the Wallace in the movie, one wonders how this often inarticulate guy could have written the word-carnival work that he did.

More serious and damaging are the film’s treatment of Wallace’s statements to Lipsky about his multiple breakdowns and attraction to suicide. In the book, this material appears early and Lipsky keeps returning to it. In the movie, the material is highly compressed, rather vaguely rendered, and treated as a secret that Wallace reveals to Lipsky near the end. The reality of Wallace’s life — that he lived with and tried to manage debilitating depression from high school on — is minimized, if not quite evaded, by what the screenwriter and director omit or massage to keep the movie on a predictable narrative arc and a comfortable, mostly comic plane. The End of the Tour is a “Smart and Smarter” with elements of Dumb and Dumber but almost never “Deep and Deeper.”

According to D. T. Max’s biography of Wallace, his public persona was carefully constructed, and it’s clear (as well as rather sad) that he withheld a lot of information about his illness and breakdowns from Lipsky. The screenwriter and director had access to Max’s 2012 biography, but they choose to withhold from the audience what they knew about Wallace. They might say in their defense, “The movie is about a five-day period in Wallace’s life when he was well and riding high.” But this movie would never have been made — and a lot that has been written about Wallace would never have been written — had he not killed himself at age 46. Since the movie uses that fact to bring audiences to the theater, Ponsoldt should have had the courage to include biographical information that would help explain the very act that made the movie possible. If a moviegoer didn’t know this information about Wallace from another source but knew that he had committed suicide, I believe the moviegoer would be mystified why this man who was very successful (and loved his dogs) would hang himself. The End of the Tour need not have been about the end of Wallace’s life, but by largely avoiding the beginning of his life the movie offers a very limited slice of Wallace’s biography.

The End of the Tour spends many of its minutes implying that Wallace was a prisoner of his new fame: he enjoyed it but worried that it was engineered by marketing, that people pursued him because he was famous, not because they had read Infinite Jest. While this concern with hype was crucial to Wallace when Infinite Jest was garnering rave reviews and television programs wanted him to appear, Wallace was even in his most productive and happy moments a prisoner on parole of his disease, of his depression that could come at any time, without any apparent cause. This horror — and the heroism of writing some great fiction despite the horror — is the profound existential fact of Wallace’s life that the movie mostly shrouds in a lot of chatter about the media, reviews, reputation, and selling out, talk that is obsessively driven by the envious Lipsky.

As if the self-destructive genius was not enough of a hook for the movie, Ponsoldt chose to cast two well-known actors for some star drawing power. Jesse Eisenberg as the parasitic Lipsky is a reasonable choice. But Jason Segel as Wallace — contra all those who say the casting was brilliant — is a disaster. I met Wallace once, and he was a lot better looking than the Segel of the movie, and he also didn’t totter and shamble like Segel. Next to the short Eisenberg, the tall Segel looks and walks like a monster, a hapless Frankenstein. Infinite Jest is about monsters and is itself an intentional hypertrophied monstrosity, but Wallace was not the big oaf Segel projects. Wallace was very self-conscious about his physical appearance; he would have been disgusted — and rightly so — with how he is represented by Segel. I can hear the director say, “Jason is not attempting to resemble Wallace but represent his essence.” But the whole appeal of The End of the Tour depends on careful resemblance. This is Wallace’s house, these are his odd furnishings, his two dogs look like this, he ate Pop Tarts, he had this very poster of Alanis Morissette on his wall. Lipsky and the movie obsess over these surfaces. But Segel, despite the constant bandana, doesn’t come close to Wallace.

I realize the movie was not made for me — someone who met Wallace, corresponded with him, wrote about his work, read what others wrote about him and his work. It was made for the millions who like buddy movies (even if the buddies are writers) that amuse, seem “based on a true story,” appear earnest and well-intentioned, and have a happy ending, no matter how forced or false. The End of the Tour climaxes with footage of Wallace-Segel dancing. Wallace didn’t dance but told Lipsky and other journalists he did to cover up his attendance at AA meetings in churches. The screenwriter and director could have known this — maybe did know this — and yet the last we see of Wallace is him dancing in the kind of mindless ecstasy that he found difficult, if not impossible, to achieve in reality. Those in the audience who were lured in because they heard the movie was about this cool-ass genius who killed himself young may be confused by the scene, but, the director hopes, will feel good anyway.

Once objections to the movie began to surface after it was shown at Sundance, Ponsoldt went into weasel mode. To deflect complaints about the depiction of Wallace, Ponsoldt has said that the movie is primarily about Lipsky, which seems to me completely disingenuous. Ponsoldt has also said he wanted to avoid making a “tortured genius” movie. Instead he makes a “clever buffoon” movie. “Hopefully, it’s a hang-out movie,” Lipsky told an interviewer, “like you enjoy hanging out with them, and when it’s over you wish you could hang out with them some more.” A movie featuring David Foster Wallace that aspires to the feel-good effect of Friends? There is a terrible mismatch between the mind and work of Wallace and the sensibility and ambition of the director.

William Gaddis wrote, “What’s any artist, but the dregs of his work? the human shambles that follows it around.” I think Wallace shared that view, and I think it’s the reason he would not have approved of a movie about himself. But if a movie was going to be produced, it should have made some effort to resemble in its form and style the artistic originality and fearlessness of the work that Ponsoldt said inspired it. Wallace’s fiction was often an elegant shambles, creative disorder. Ponsoldt’s road movie is on cruise control, never swerving, never surprising. The film imposes no cognitive dissonance, never departs from genre conventions, doesn’t shock viewers — except those who know Wallace’s life story and know how much The End of the Tour leaves out.