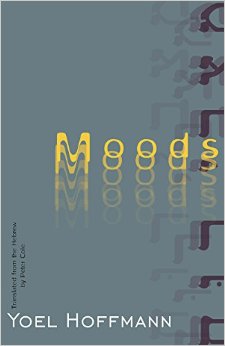 “There’s death in every diary,” William H. Gass once wrote. It is a phrase that has frequently come to mind while reading Yoel Hoffmann’s latest novel, Moods, which has been translated from the Hebrew by Peter Cole. If there is any form that this strange yet beautiful book nods to more than any other, with its short chapters describing the narrator’s various emotional states on any given day, it is the diary, and death is everywhere in its pages.

Moods begins enigmatically, as if posing a riddle to the reader:

Ever since finishing my last book, I’ve been thinking of how to begin the next one.

Beginning is everything and needs to contain, like the seed of a tree, the work as a whole.

And so, what I see is the figure of a man descending (from the sidewalk) five or six steps to a basement apartment, and he’s halfway there.

I know it’s a love story. And maybe there’s a woman in the basement apartment. It’s probably November.

This is the entirety of the first chapter, and as the reader reads on, the question of what this beginning means, how the book may become the tree that springs forth from so strange a seed, persists, for it seemingly goes unanswered. The narrator, who is Yoel Hoffmann, says of the figure of the man on the next page that his name is “probably Nehemiah,” only to never mention him again. The woman he is visiting in a basement apartment turns out to be plucked from a memory of a French prostitute Hoffmann once solicited on the street. It seems that Hoffmann’s intent in emphasizing the importance of beginnings in novels is merely meant to set up an expectation that he then blithely subverts, much as in the way, later on, he gently mocks the idea of a “bonafide story with plot twists and intrigues and an ending cut off like a salami (to keep it modern).” But it is not so simple as that, and it is a mark of the success of the novel as a whole that the first chapter fulfills its promise so profoundly by the end.

What follows are 190 chapters of similar length and it is, on a first reading, often difficult to see how they relate to one another, and what part they play in the overall theme, save for a certain similarity in tone. Some objects, like Hoffmann’s father’s watch, seem to be singled out for importance, only to be mentioned once more, if ever again; some people are recalled only for a brief cameo, while others, like Hoffmann’s stepmother Francesca, are frequently brought up. The early chapters have a dream-like resistance to interpretation, one that serves to heighten the reader’s pleasure at encountering images of startling clarity, ones that need no context due to how well they’ve been described, like this one, which conjures up a parti-colored line of girls’ heads effortlessly: “In the schoolyard there were faucets, and all the girls drank from them, and we could see all sorts of braids like a book that’s being translated into many languages.”

But as the book progresses, and the reader becomes accustomed to its internal logic and structure, the book’s techniques, concerns, and themes gradually come into focus, mirroring Hoffmann’s use of suggestion in the image above. In the fourteenth chapter, the narrator switches from the first person to the first person plural, and, capricious as it seems at the time (he attributes it to “embarrassment”), it is gradually revealed to be central to the book’s consideration of narrative and the creation of art. Similarly, the theme of death, and the author’s concerns with dying, is gradually made felt by persistent pressure, only later to be explicitly dealt with. It becomes evident that the people Hoffmann remembers are all dead, or probably dead; he offers, apropos of nothing, a list of only the departure times for buses headed to Ma’alot; he gives intermittent updates about the precarious state of his health. The way the book unfolds is summed up in a “love poem” that Hoffmann offers up “to all the women readers of this book:”

A book you touch

The juxtaposition of “this book” and “A book” points to the illusory difficulty of Moods and to the discomfort many seem to have with books that similarly employ unusual strategies, such as presenting the author unambiguously as the narrator and mixing memories with fiction. Every book, no matter the genre, sets up its own internal logic and rules at the outset, and the reader is obliged to accept them and continue or reject them and close the covers. The more conventional stories, the “bonafide stories,” have terms and conditions readers are so used to that, if they stop to consider them at all, they assent to as readily as they click “Agree” to terms of service for updates to their smartphones. It is only the unconventional narratives that are subjected to a scrutiny that insists, even as it tries to understand, that nothing seems to make sense. But if, as Hoffmann suggests, the reader weathers their initial discomfort and lets the book do their reading for them, all will be revealed.

And what is revealed is a love story, just as Hoffman promised in the beginning, one that shares many of the familiar elements of the conventional narrative: There is the protagonist, the author, Yoel Hoffmann; there is the conflict he faces, namely reconciling a life lived in the service of literature, where authors “peddle fabric with a sun painted on it and no one even looks up” with the more quotidian and beautiful experiences that make up any life, like the sounds of wildlife that make up “the Philharmonic of the Galilee’s Hills”; there is a cast of minor characters with their own quirks and peccadilloes, which serve to emphasize the themes of love, loss and death; and there is the abrupt finale, sliced off as cleanly as any other salami, which offers a resolution, if not a definitive truth, in the end.

It is tempting to include the final chapter in toto, but that would serve only to deprive the reader of the effect it achieves, and the way it serves as a coda, offering up an answer to that riddle from the beginning. Reading Moods is not unlike the experience of reading the fictions of Jorge Luis Borges, as it compels an immediate reassessment upon conclusion, and rewards an immediate rereading. The work that particularly comes to mind is “Borges and I,” which contains a sentence that could have been written by Hoffmann, “So my life is a point-counterpoint, a kind of fugue, and a falling away — and everything winds up being lost to me, and everything falls into oblivion, or into the hands of the other man,” and it shares the contemplative, almost despairing mood over creation that seems to recur most frequently in Moods, hits the same minor key of a book that Hoffmann describes as “mostly blues.” And if the reader passes through the book’s short passages a second time, noting the finer patterning that contributed to the book’s ultimate success, and is left recalling this passage, “We realize that these words don’t amount to what’s usually called belles letters. If there were a bank where one could exchange literary currency for the currency of life we’d go there and ask for the latter, even if it cost us greatly,” which is unambiguous about the relative importance of writing novels, even good novels, in the face of death, they need only need to read the first line and remember that the beginning is everything: Hoffmann has undoubtedly begun again.