The Old Man and the Bench – Urs Allemann 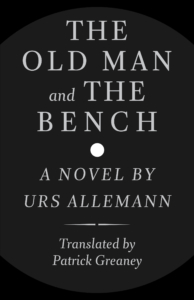 When Urs Allemann’s Babyfucker took second prize in the Ingeborg Bachmann competition in 1991, it didn’t take long for scandal to overshadow the novella itself. No doubt this partly had been Allemann’s plan; his incendiary title and opening line (“I fuck babies.”) seemed almost too readymade for any puritan or politician trolling for the latest example of cultural decline or artistic bad taste. To censorship’s shrillest proponents, Babyfucker set itself up as the easiest kind of target, and it worked.

While it made for great press, the hubbub of the Allemann Affair (as der Spiegel called it) ultimately clouded the view of a remarkable piece of writing, an insular, halting, repulsive, and often beautiful meditation on language and time. Babyfucker’s narrator, a man condemned to be surrounded by creels of crying infants who he sodomizes, rapes, and then tosses back, spends the novella self-consciously babbling through a deconstruction of his own grotesque punishment. In the process, his “sentence” transforms into both a punitive declaration from a nameless judge and the narrator’s only tool for self-articulation. As he puts it: “I fuck babies. That’s my sentence. I don’t have any other . . . My sentence. It’s what I have. It’s what I am. I have to be dragged out of it. By me.” He’s a man completely locked in by his own language, and over the course of Babyfucker, Allemann locks us in with him.

The sentence, as both temporal horizon and unit of speech, again plays a central role in Allemann’s latest short novel, The Old Man and the Bench. Here Allemann’s protagonist has been “offered a contract,” given to him and seemingly enforced by no one, to sit on a non-descript bench and remember the past. There’s a definite timeline in sight: “From now on he’ll come here every day. It’s his place of work. He’ll reminisce about his childhood. For five months.”

Seems straightforward enough. But soon the man’s memory proves tricky terrain. His anecdotes quickly veer toward the surreal: tennis courts made of glass, balloons holding people inside them, games where the man gnaws off his fingers out of boredom. Any family details he offers stunt and peter out. His reconstructed past is one of fabrications, abandonments, and evasions. Inanimate objects — concrete towers, matchsticks, pinheads — serve as displaced stand-ins for his family and himself. Narrating his own birth at one point, he paints himself as a “fecal stick,” his entire life coalescing into an instant of quick, abject descent: “Birth it explained to itself is over when the fecal stick is finally so heavy that it falls from the cave roof. Then it plummets to the cave floor and dies. This plummet the moment of the plummet the fecal stick called life.”

Like Freud’s fort-da game, in which the repetitions of his nephew’s playing are read as an attempt to master painful experiences through replication, the old man’s stories recount past traumas, making them real again. But these narratives also act as trauma’s container and stabilizing frame. Allemann deftly mines this vacillation, charging the man’s dead end snippets with strange, inventive energy. Though we know his contract is elapsing, very little gets done. The old man’s language and actions remain suspended in a perpetual state of becoming, a “twaddle” (or ein fünfmonatsgequassel as Allemann calls it in the book’s German subtitle). Unsinkable desire inches along, but just barely; instead, we’re propelled forward through syntactical repetition, a weaving of sound that turns the man’s language against itself, at points rendering his twaddle into a spiraling music:

One might expect a narrative this deeply entrenched in human subjectivity to be told in the first person; that’s how it usually is in Beckett, Allemann’s closest forerunner. But The Old Man and the Bench adopts an oddly abstracted third-person point of view, amplifying further the novel’s sense of depersonalized separation. The old man’s narrative seems to hover somewhere in the middle distance, where “everything he says is treated as if it were on paper.” His recounted stories become a territory where he literally cannot find himself, where he’s resigned to the ultimate antagonism between his own experience in the world and the language he can use to describe it: “He only has language he says. Not true. Language has him. Hates him.”

Throughout all this, the old man’s contract remains his sole comfort and point of reference. Simple as it is, by offering him a destination and task each day, that agreement establishes order to the chaos of his past; his endless twaddle can always be excused as just a fulfillment of terms. In that contractual framework as well resides the hope for an ending. Whether it be judicial, contractual, or linguistic, the sentence must always conclude. And that endpoint — a period, the end of terms, or death — is the very thing that makes meaning possible.

Allemann knows this, and over the course of the novel, the promise of an ending looms tantalizingly in front of an old man who’s unable to ever get started. That tension between the old man’s winding babble and the book’s approaching termination point is with us until the end. It’s not spoiling anything to say that the old man’s twaddle does eventually stop, but The Old Man and the Bench whimpers and limps to its conclusion. The contract’s termination doesn’t give way to meaning, but instead ushers in the negation and nothingness that the old man’s language had been nervously railing against all along:

And bang. He’s no old man. Sentence without consequences.