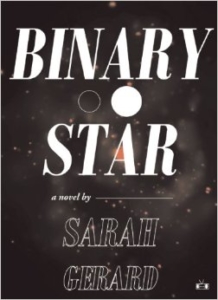 Opening a book, when the layout is distinct, I form an idea of it, prepare for a mood, a tone, possibly what it is about. Long, dense pages with compact lines, and few paragraph breaks mean an older, self-serious book, maybe family dramas, Russians, or Mann. Endless, uninterrupted paragraphs running across pages mean breathless monologues, solipsistic trains of thought — Bernhard or Bolaño’s By Night in Chile. Sparse pages, with tiny little paragraphs, is a philosophical drift, contemporary, made up of dialogue in one line that may be more familiar to how we speak than long speeches, but still uncanny: here think of McCarthy, DeLillo. Sarah Gerard’s Binary Star is in this category, its dialogue empty of quotation marks, made up of countless single lines. If I’m careless, it can be read rapidly. A slower read needs to come from me, not the book. The minimalism of her pages reflects the contemporary way of being, showing us what we may silently know, but are still trying to understand and live with.

The story is simple: a young couple, John and the narrator, are on a road trip, and we follow them through their return home. He’s an alcoholic; she’s anorexic. They’re toxic for each other, and completely drawn together. During their trip, their relationship, Gerard puts us through the great contemporary solipsistic malaise of the young — those suffering and lost. Shared experiences are hardly that at all, are instead two private worlds moving over the same ground. Of a party, the narrator remembers, “Yeah it wasn’t fun after that,” only for John to respond, “Are you kidding? That was awesome.”

Most of their exchanges are single sentences back and forth. Their emotional fights are defeats, pointless in their lack of engagement with each other, and with themselves. Knowing they are wounded people, terrified of what that means, what changing means, they turn from connection:

How long have you been doing it? John asks me.

Ever since I was little.

I don’t know. Why do you need to drink?

Single lines, they sit there on the page, uncertain if they’ll allow connection with anything, anyone. They become like a gchat box: messaging a friend who isn’t there, isn’t responding. You keep on writing anyway, hoping that something can come of it.

Binary Star is not a book that wallows in misery, even if the characters do. These relationships have love, but it’s shared by two people whose pain puts them at inevitable odds, capable of using that pain as a draw instead of a reason to leave. Gerard knows this even if the narrator and her boyfriend do not. When, after a particularly rough night that involves driving off the road and him passing out due to his drinking and medication, they “make love in the tent” in the morning. That word, “love,” is heartbreaking to us. We know their sex is unsatisfying for both of them; we know they are fracturing. When the narrator uses “love,” it’s sad in its purposeful deception.

She feels their pain, her anorexia and his depression/alcoholism as gravity, pulling them downwards and towards each other, but she glimpses escape, wants it even when she isn’t admitting it. The narrator’s response to her pain is nuanced, and scorched with honesty, even as lies litter the pages. Gerard’s prose is too beautiful, too aware of the potential of poetic pacing, for wallowing. The opening pages, italicized lines, some less than a page, could easily be read as poems instead of prose. Describing white dwarfs, binary stars, the life of stars, they reach past the basic realities of the novel into the cosmos, and when the narrator speaks of her turn to space, connections tug. The idea that John and the narrator are drawn to each other as gravity comes not just from how they act towards each other, but from the poem-like opening. It tells us “Binary stars are gravitationally bound.” The lines shift, moving between knowledge, science, experience, emotions, and memory, seeking a way for them to come together.

The narrator’s study of the physics of stars is a show of her own burning out, but her strength too. It’s a form of survival. One thing being another at the same time is an essential part of Gerard’s book. To return to the solipsism: on one two-page spread, thirty-seven sentences start with I, and others have multiple I’s in them. They come from the narrator and her boyfriend. Both are desperate to talk about themselves, to lie about themselves, to avoid talking about anything else. But, outside of dialogue with others, in private thoughts, confessions, the narrator’s self-obsession is bold exposure. She admits her own lies, the desire to continue lying, the dangers of her desires that come from anorexia, and that she has desires fighting against those. Her solipsism is damaging, but once there, it also takes on a form that is brave, gives a chance for salvation.

The strange multitude of ways that desire manifests itself is essential to Binary Star. In a simple way the narrator’s anorexia is a denial of desire but seen more complexly, it is an essential desire. In one of those openings, what I continue to want to call poems, she admits “I want no part of my body touching any other part.” The reality of what that means is haunting, in the context of stardust, something philosophical, a desire to be nothing, to be absence. It is desire. Her sexuality becomes absence too, in the childish, selfish attempts of her boyfriend, in her relationship to herself: “Last night I touched my absence. Beauty can be tricked into being where it is not.” Later, in the narrative, “Another thing researchers feared was that, sending astronauts into space alone, they would lose the feeling of belonging to any species. They would forget what it’s like to be human.” She wants this, or she already feels it so intensely, that she wants it to be complete, not painful in its imperfection.

The landscape of Binary Star is itself an absent, empty place. Oftentimes, there is little to the world around the travelers except the monuments of brand consumerism. The couple seek out a vegan donut shop and find “the shop is flanked by Dunkin’ Donuts on one side and a Starbucks on the other.” The life they live is not full of home-cooked meals. They don’t choose sustainable, free-range chicken over McDonalds, instead only the latter is given attention in description and their animal rights beliefs vague ideological speech. In this world devoid of healthy life, the narrator guises her anorexia as a condemnation of the consumer world.

This vapid culture threatens the narrator in many ways, like as the long, torturous list of magazine and website headlines, “5 Bizarre Weight-Loss Tricks That Work. Scare Celeb Diet Tricks You Should Avoid. Scare Celeb Diet Tricks No Women Should Try.” As much as she feels the gravitational pull to her boyfriend, she feels the pull of this culture, and it’s a black hole: “Nobody ever talks about the giant black hole at the center of our galaxy, or the fact that most, if not all, galaxies orbit super-massive black holes.” Even their attempts at a vegan life feel empty, a spiteful protest. For her boyfriend it’s an excuse to antagonize others, possible friends.

Created in all of this is another binary star, the perfect being and the absent being. The culture domineers over the narrator, though it is empty, creates the illusion of perfection. The only way to be part of it is to be that: “I am a perfect daughter, student, girlfriend, woman. I’m admired.” When that is impossible, in the pain of the rejection from it, mental processes of erasure turns vertiginous:

Think of your other inadequacies.

Tell yourself they’re worse than you think.

Tell yourself you will never be good enough to have whatever you want most.

The escape from the gravity of this pull may be the most important of the narrator’s desires, that desire for honesty. She lies to her partner, to her mother, to her friends, but she struggles towards herself. Between the desire to be perfect and the desire for nullification is something else she doesn’t know how to articulate yet, a form of existence she doesn’t know, only sees as a shadow. Her confessions to herself, to us, begin to undo her lies to others, and leave room for a different turn. To get there, she’ll continue to drive her body, her self, into nothing, and the question that remains is whether she’ll go too far, or find a new identity to create from.

P.T. Smith is a writer and critic living in Vermont. He has also written for Three Percent, Bookslut, Mookse and the Gripes, and Quebec Reads.