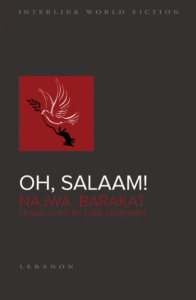 For many of us, war doesn’t affect daily life — or, at least, it doesn’t seem to. Even so, it makes up a large part of the world’s daily news: who is advancing, who retreating, and how ordinary people continue to cope. We grant the moment of “war” a special status. Just so, novels, memoirs, and poems where war is foregrounded occupy a large place in literary canons.

What gets lost, sometimes, is the time after a conflict. Once the “peace” begins, what happens to those who’ve adapted themselves to a long and brutalizing war? Najwa Barakat’s Oh, Salaam!, written in the fragile peace that followed Lebanon’s 15-year civil war, asks this question. The book, newly translated by Luke Leafgren, is not a large, serious Post-War Novel. Instead, it’s a fast-paced, novella-length work, reminiscent of Muriel Spark’s Driver’s Seat, both for its black humor and for the way its characters slide precipitously into danger.

Oh, Salaam! centers on a handful of characters. Three of them fought together in the civil war: a former bomb-maker (Luqman), a former sniper (Najeeb), and a former torturer (the Albino). Although the Albino is dead, the book follows his fiancée and two other family members driven crazy by war. Later on, this small group is joined by a privileged young Lebanese woman who’s briefly returned to post-war Beirut.

The book says little about which “side” of the war any of the characters were on. During the 1975-1990 war, Beirut was broadly divided into East (Christian) and West (Muslim). But the reality was much more complicated, with many competing factions and shifting alliances. In Oh, Salaam!, the main characters’ allegiance is never named, and they refer to themselves only as members of “the gang.” The English word “gang” has useful connotations: Luqman’s motivations for fighting were personal enrichment and a protective sense of belonging.

We do know that the Albino was Christian. There is a giant portrait of his patron saint, Elias, in his mother’s apartment. Also, before the Albino tortured his victims to death, he “baptized” them. But this says less about his sect and more about how belief systems are frighteningly flexible during war, a theme also pursued in Elias Khoury’s great post-war novel, Yalo.

Although each of the characters has their moment, it’s Luqman — the former bomb maker — who forms the heart of the book. Indeed, the novel could also be titled Saving Luqman, which makes it a sometimes uncomfortable read, as we don’t really want this killer and torturer to be saved.

In the shadow of war

Luqman has fallen low after the war: As the action opens, we find a middle-aged Luqman living in a filthy, rat-infested apartment where the electricity has been cut off because of non-payment. As a boy, Luqman was a troublemaker, scorned by his family, ill-prepared to do much of anything. But when war changed the country’s landscape, he grew rich and powerful, drove a Range Rover, his pockets full of money for foreign prostitutes. In those years, he had the power to frighten, torture, and kill.

After the war, Luqman’s life quickly fell apart. Still, he continued to see himself as a lone warrior-wolf. He doesn’t want to re-integrate into society, but to flee it. “If only,” Luqman wishes. “If the war hadn’t ended and he were still rich, he would have erected a palace on a high, remote mountain. He would have filled it with rare, exotic animals and lived there alone with snow-white Marina.”

Like Luqman, Najeeb also went into a period of stasis after the war. He took up a career as a small-time drug dealer, but was soon picked up by police. Through connections, he just managed to get himself transferred to an insane asylum.

But it’s not only Luqman and Najeeb who find themselves frozen in the long shadow of war. As the book opens, Luqman is headed to a giant public gathering, complete with street-food vendors, children, and candy. But this is not a holiday. Instead, it’s a public execution of two “traitors.” We barely see the execution, and we don’t know what the hanged men have done. What’s central is the population’s cold enjoyment. Luqman manages to hook up with a female radio presenter after the executions, fellates her, and expects to be pleasured in return. But she’s coldly sated, and leaves Luqman as she found him: unlucky, unloved.

Still, humans have a way not just of surviving, but of trying to rise again. And post-civil-war Lebanon is not entirely without promise for Luqman’s salvation. After Luqman springs Najeeb from the insane asylum, they realize that the city still has rats to exterminate. These rats are not just a public-health menace, but also a strange mirror of the civil-war fighters. The rats multiply rapidly and bear disease, and they can also be tortured, poisoned, and disposed of with impunity. They are both powerful and powerless.

Barakat is not alone in putting rats at the center of a post-war landscape. Lebanese writer Rabee Jaber does the same in his 2008 novel, The Mehlis Report, as does Algerian novelist Rachid Boudjedra in The Obstinate Snail (1979), published after Algeria’s long war with France.

As in Boudjedra’s book, the rats in Barakat’s novel are uncomfortably human: “The rat is the most destructive, the most gluttonous, and the most reproductive animal,” one of the characters writes in a journal about rat extermination. “It doesn’t kill just when it is hungry, but also, and especially, because it enjoys destruction.”

Yet while Luqman, Salaam, and Najeeb open a rat-extermination business, we never see them kill any rats — except one Luqman eviscerates for enjoyment. None in the group seems interested in building a business so much as in escape. The business leads Luqman to meet Shireen, a young Lebanese woman who has just returned from abroad. She is willing to save Luqman, but many obstacles remain before he can flee Beirut with her. He, Salaam, and Najeeb find that it is not so easy to escape the gravity of war.

A narrative with a war-criminal protagonist is difficult to sustain. Elias Khoury just manages it in Yalo, in large part because the titular Yalo sees himself not as a criminal, but as a victim. And indeed, just as he victimizes others, the state victimizes Yalo.

Luqman is far more swaggering, and Barakat does little to justify his acts of violence. Although he plays the victim to Shireen, the reader always knows it’s an act. Instead of making Luqman sympathetic, Barakat uses humor and the book’s rapid pace to keep the reader attached. Yet occasionally we feel that even the author can’t stay with Luqman and Najeeb.

For instance, when Najeeb is talking about a brutal, torturous rape of a village girl, the narrative forces Najeeb to justify himself. Although he’s speaking to his fellow rapist Luqman, Najeeb finds it necessary to mount a weak-sounding defense: “Don’t tell me she was a virgin. All we wanted was a little fun, but there are some people who always turn fun into a tragedy.”

Yet despite these moments when the reader is pulled or pushed out of the narrative, Oh, Salaam! is a fast, engaging, and rich read. It’s a book to be swallowed in one sitting, and then chewed over for the weeks and months to come.