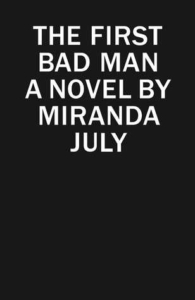 For whatever reason there are artists with whom, before a critical conversation around their work can even begin, one has to reckon an aura of reputation. If we accept this idea, that there is a unifying, identifiable Miranda July-ness, it’s the –ness people dislike.

This is an unfair but perhaps inevitable consequence of a cultural moment in which art, “real life,” celebrity, and personal representation in media both traditional and social are uneasily mingled. But why is it that certain Renaissance women, usually those involved in multimedia work, have become the special targets of this kind of thing? Maybe this debate is already stale (it’s been noted that we’re subjected to much fewer Girls thinkpieces this season), but I was heartened to see most of the response to Miranda July’s new novel, The First Bad Man, assessing its aesthetic qualities, its underlying feminism, and the strange human behavior at its center, before its author’s reputation.

In a conversation with Felix Bernstein at BOMB, poet and performer Cecilia Corrigan talks about affect and expressivity in art created by women.

For women, there’s an imperative to take on a flat affect if they want to be “taken seriously,” and expressivity is seen as a sign that you must not be concerned with your intellectual impact. You’re seen as an irresponsible mother to your ideas, or something.

Something like that might be at play here. The zombified, effaced aesthetic of flatness might even be said to have its roots in the 70s, 80s, and 90s conceptual and performance art worlds that July emerges from. July herself walks an uncomfortable and often brilliant line between affect and affectlessness, maybe the reason why she appeals to both the art world and worlds beyond. In her work, the bizarre and disturbing are rendered casually and the casual is made grotesque, or frightening, or intriguing.

Without making “total artwork,” she makes art that has a totalizing aspiration to it — e.g., Me and You and Everyone We Know — even if most of it is very grounded in itself, in everyday or mundane details. July actually feels like an artist for our times: present, conversant, prolific. Attentive to the political sphere as well as the realm of the personal and relational.

As for the Julyness, yes, maybe she cultivates a kind of California Sincerity persona, but it’s one that isn’t necessarily present in the work. It’s hardly “quirkiness,” but an investigation of anxiety behind New Age sunniness.

The First Bad Man is a book mainly about sex. But sex conceived as a symbolic totem for human intimacy in general. And the theme of intimacy isn’t even necessarily suggestive of just romantic connection. Combat is intimate. Living is intimate. The space between my socks and the front of my boots is intimate. It is a funny, often uncomfortable book about the inhumanity of certain relationships, and their gradual re-transformation to the human.

At the center of the story is Cheryl Glickman, a solitary, meek woman in her forties living in Los Angeles. She works for a non-profit, Open Palm, that produces women’s self-defense/workout videos (“With your new ripped bod, you may actually get attacked more often!”). The workplace is full of deadpan comedy, especially at the expense of her clueless, wealthy bosses and their bizarre California liberal mannerisms.

Cheryl is obsessed with one of the men on her organization’s board, Phillip, with whom she is convinced she has a connection that transcends their current bodily iterations, a connection that goes back many lifetimes. She has fantasies about him in which she further fantasizes, her fantasy-self fantasizes, etc., chasing the sneaky heart of desire that the book deals with.

Experienced homebodies will identify with Cheryl’s hysterical “rules” for living. No shoes inside is common enough, but she also insists on eating her meals out of the pan they were cooked in, as long as it’s used to cook “savory things” only. It saves a plate! The system works. Why change it?

Oh, and Cheryl has a psychic bond with children, some of whom are instances of an imaginary child she calls Kubelko Bondy. Like the cat Paw-Paw in July’s 2011 film The Future, or the two kids in You and Me, Kubelko is the mythical Wordsworthian-child-projection of the book.

Cheryl finds Clee’s abuse arousing, even therapeutic. They enter into an uneasy contract. They begin to fight, at first free-form, then reproducing scenarios from her work’s instructional videos. Cheryl describes their fighting as “a little theatrical but mostly athletic.” It becomes something like the self-defense-as-cardio Open Palm deals in. It gives Cheryl relief from her anxiety and her Globus pharyngis, a persistent, possibly psychosomatic lump in her throat.

Cheryl’s life is intensely conscripted by rules, unspoken or official, so the violence itself is a kind of transgressive thrill. Her therapist calls these things “adult games.” (In another subplot, this therapist is having an affair with another therapist, enacting her own version of an “adult game.” The book is full of parody of therapeutic language, and more broadly, the kind of person a therapeutic culture produces.)

When Phillip confesses his love for a sixteen-year old girl, he seeks Cheryl’s “permission” for his sexual activities by periodically texting her with obscene, all caps declarations. He pretty quickly fades into the background of the narrative, becoming something like the book’s bad conscience. But Cheryl finds herself unmoored from meaningful human contact besides the increasingly baroque sexual fantasies she has. Male lasciviousness, sexual violence, the “bad man” of the title are all ghosts that haunt the book indirectly, which focuses almost entirely on the relationship between the two women.

It is, from the beginning, a kind of sacrificial or sacramental relationship, a mortal combat through which Cheryl sorts through her sexual projections and unspoken fears, almost as if she were battling forces larger than the hapless twenty-year-old taking up residence on her couch.

Clee never completely emerges as a person the way Cheryl does. She tells Cheryl she isn’t gay, that in fact she considers herself a “‘misogynist’, or whatever.” Clee occasionally feels like a stand-in for Cheryl’s (or July’s?) confusion about young people. Clee has this kind of aimless, malevolent vacancy that doesn’t feel quite real.

Still, there are many glittering, hilarious turns of phrase here. Cheryl laughs “with the low chuckle of a wise person.” When she is betrayed she is “as betrayed as the most betrayed person in Shakespeare.” Someone “weeps like every astronaut that has seen the earth from space.”

Cheryl’s therapist suggests she sing a song as a method of coping with her uncontrollable sexual fantasies. She chooses some lines from Bowie’s “Kooks.”

Will you stay in our lover’s story?

If you stay, you won’t be sorry.

“It was like saying abracadabra billions of times, saying it for years, until the rabbit died of old age, and then continuing to say it until the rabbit had completely decomposed and been absorbed into the earth, poof.”

These occasional spirals into psychological neurosis or obsession feel so real. It’s not that everyone’s brain works the same way, but you do find snatches of recognition in Cheryl’s weird thought patterns. And the recognition of this strangeness as one’s own is exciting. Only just before, it seemed like the humming and random gurglings of an organ, as if your brain was your stomach.

The book takes a sharp turn in its last third, as Clee becomes pregnant and the mythical Kubelko becomes a real, living baby, both a kind of wizened projection of Cheryl herself, and something completely new. The passive absurdity and neurosis of Cheryl’s life peels away, revealing a new form of life. This book very cannily recognizes the obviating power of love or intimacy to destroy pre-constructed systems of living. At first it’s Clee’s violent, bodily love, and later, her child.

Björk, in an interview with Jessica Hopper at Pitchfork, talks about women’s work as peacekeepers, as the invisible glue between human relations, reconciling opposites — like Kofi Annan, or Mary Poppins, she says.

July’s work has always, for me, had an aspect of that reconciliation. Of universalizing. I don’t even mean this in the pejorative sense in which that word is usually invoked. I actually think this is a good thing. Instead of scrutinizing the distance between her characters, interpersonal combat and trauma bring people into a shared humanity, or more realistically, into a recognition and reassessment of the very tenuous, impossible status of a stable human life.

July understands the perverse nature of human relationships — their very, very dark corners. And yet she doesn’t succumb to nihilism or grotesqueness for its own sake. She chooses to illuminate the goodness that bafflingly, paradoxically arises somehow. Or not the goodness precisely, but the holy remainder after perversity boils out.