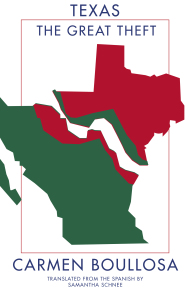 The border between the U.S. and Mexico has never been a static line. In Texas: The Great Theft, Carmen Boullosa sets out to document a particularly nasty chapter of border history: the reconquest of Texas, when United States citizens wrangle land from Mexicans and Native Americans by hook or by crook — or to be slightly more blunt, by rape, murder, and theft. Boullosa fictionalizes real events that took place around Brownsville, Texas, a town that sits just across the Río Grande from Matamoros (where one would look back at Brownsville across the Río Bravo). In Boullosa’s novel, these towns become Bruneville and Matasánchez, and that conflict over the river’s name becomes just one tiny thorn in the briar patch that is the power struggles between all the diverse people who live there. It seems significant that Brownsville is the birthplace of Américo Paredes, the famous Mexican-American author and anthropologist, and pillar of Chicano studies in the U.S. If Paredes represents Mexican-American cultural studies coming into mainstream U.S. academia, Boullosa represents Mexican authors beginning to take an interest in the stories of their compatriots across the river.

The events of the novel revolve around a white sheriff shooting a Mexican aristocrat; in the background is the slow, systematic theft of Mexicans’ land by white people, often through predatory, pseudo-legal practices; and all around the edges are the stories of Native American, Mexican, and Black men, as well as women of all races, in slavery. Texas moves from character to character, often spending no more than a paragraph with each one before moving on (at times it feels like a Robert Altman movie with about twenty extra characters). The narrator dips into a character’s consciousness to reveal anything from mild lust to abject misery, but then leaves just as quickly and unfeelingly. No character really matters to the narrator; she picks up their thoughts and feelings and puts them down all with the same amused indifference. One character becomes fixated on a terrifying vision, and in one of a handful of episodes in which he appears, the narrator tells us: “He should overcome his fear, or else all will be lost, he thinks, and he’s right. But he doesn’t know how. He sits in his room, staring at the wall, staring and staring, not stirring a bit.” This character commits suicide, and his death is reported with a similar unfeelingness.

This deliberate looseness of narration means that it takes a long time to get to what happens — in fact, the first fifty pages or so of the book are devoted to following the travels of a single piece of news. The narrative feels like it is wheeling out of control at times, but the narrator frequently intervenes, making her presence known and commenting on the pace of the story: “Let’s dot the i’s and cross the t’s.”; “But back to our story . . .”; “The third and final digression . . .” The playfulness makes the story feel fun, even as the narrator recounts some horrifying histories. Men rape women with the casualness, and frequency, of taking off their socks; and the narrator relates it all with equal casualness. Sometimes the humor tastes slightly bitter, but never loses its levity, as when she describes the actions of the Texas Rangers: “While they wait, on the verge of exploding with anticipation, Mexicans are shot dead in the streets from time to time, but one sets the law after them.” This kind of comment isn’t surprising — after all, the subtitle of the book is The Great Theft.

At the first light of dawn a centaur becomes visible on the horizon: it’s Nepomuceno riding Pinta. . . .

At a full gallop, they are the teeth of the blade cutting away at what’s left of the night.

Anyone who happened to see them would swear that they were one body, but that would be incorrect: Pinta and Nepomuceno are two. Neither one belongs to the other.

It’s a charming image, made even more charming by the narrator’s tongue-in-cheek fastidiousness in reporting details that, for the most part, are entirely irrelevant to anything else. The narrator’s selection is eclectic: she might focus on a person entirely unrelated to the main story, or a bullet, or someone’s intestines: “The gas inside her strengthens. Without fully understanding its own will, except this urgency to escape — the only thing fate is denying it — the gas inside Mrs. Big pushes against blood, guts, muscle, her soul, everything that stands in its way.” This strange weighting of information pervades the book — no one character is particularly important, no one death. The occasional fantastical element blooms out of a vignette every once in a while, too: “The roots of Mrs. Big’s icaco tree don’t know how to sleep, and therefore can’t dream. Rigid, they extend through the muddy earth, thinking always of the Eagles because the Eagles are always going on about how ‘it’s so important to defend our roots,’ etc.”

Texas is an unusual kind of historical fiction. The narrator is the most interesting and complex character — her humor and vision make the history feel, at first, like a fun adventure story, all hijinks and hilarity. She whisks us through the panorama of characters and events as if not wanting to get too serious with any of them. And yet, after a while, the effect of all this lightness begins to sink in, impressing you so slowly with the horror and sadness that are the real subject of this history that you don’t feel the weight until it’s already unbearable. It’s an interesting counterpart to a mainstream Anglo-Texan version of this history that erases the violence, or presents it as the kind that doesn’t really hurt, with ketchup-blood and quick deaths. Boullosa’s narrator, with her incoherent gallery full of mini-portraits of arbitrary murders, casual rapes, random prayers, scorned loves, and unwitnessed poetic moments, ends up feeling like the cruelest of all the characters. After all, she is the one who tells us what happened.