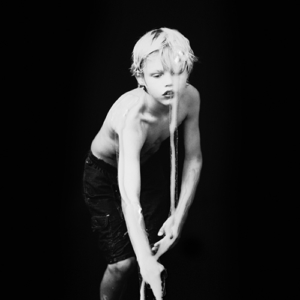 In his latest poetry collection, Skeleton Costumes, Thomas Moore takes the hideously beautiful and stretches it out into a pockmarked skin that enfolds his reflections on death, loneliness, fear, and alienation. Like his lapidary 2011 novella, Graves, this new work is mostly populated by desperate youths who find themselves violently exploited by predatory adults or who are determined to end their own lives in grisly and courageous ways. Skeleton Costumes is slighter and much more intense than the earlier work, however, comprising 151 evocative haikus — tiny, delicate, and evanescent as eyelashes that appear unannounced on bright white pages.

The scene, for many of us, of fumbling immature experimentation with poetic form, in Moore’s work the humble haiku passes before a glass darkly and sees itself transformed into something altogether more macabre, scarred by violent excesses. Its constraints (17 syllables in 3 lines: 5, 7, 5 syllables respectively), which were once part of a childish game now appear to bind and abrade the extremities of feeling. Poetry is no longer the means by which emotion may be distilled and expressed; instead it’s like Moore’s little poems resist and restrain the impassioned, featureless subjects that are forced through them. Like his friend, Dennis Cooper, whose famous George Miles cycle of novels pits its awkward adolescents against elaborate immovable structures, Moore uses form to intimate the presence of a diffuse and manipulating menace. Of course it’s the poet himself who’s behind the curtain but, like Cooper, Moore plainly empathises with his subjects and, bit by bit, he has the reader empathise with them too.

Each poem glimpses a scene or an emotional state, a threat or promise, exquisitely rendered and, more often than not, presented apropos of nothing. If you took a list poem by a second-generation New York School writer like Joe Brainard or Tim Dlugos and replaced nostalgia with loneliness and the whimsical with the deathly serious, you might get Skeleton Costumes. On facing pages Moore has arranged the following:

When you are upset

My whole world shakes to the core

Please believe in me

The sky opens up

But this is not to say that the collection doesn’t at times offer teasing, tantalising indications of the existence of an underlying narrative: like John Ashbery’s work it derives much of its propulsion from intimating that these accounts are pieces of a puzzle whose instructions have been misplaced. “Join all of the dots” one haiku runs; “And tell me what you can see / Is it terrible?” The following series of five haiku suggests complicity between two characters – perpetrator and victim – and a shared act of sexualised violence that may loosely join the sequence together.

I don’t say a thing

I’m scared of what you will do

Where do we go now?

Close your eyes for me

This is going to hurt you

I hate myself more

All over his tiny balls

And don’t tell a soul

Smash my skull with a hammer

You’re not saying anything

This is where it ends

Two features of these poems I think indicate Moore’s debt to Arthur Rimbaud, that ubiquitous bad boy of French Symbolism. First, Moore’s haikus recall Rimbaud’s tendency in the Illuminations to present his reader with perfectly illumined flashes of poetic consciousness without any over-arching through-line. Updating the French poet’s technique, Skeleton Costumes sometimes reads as if Rimbaud were on Whatsapp: questions are answered out of sequence; messages fail to deliver; data drops out and excruciating lacunae open up in the conversation: Come back, come back, dear friend, only friend, come back. *sad emoticon* promise to be good *happy/winking emoticon*.

But it’s Moore’s astounding capacity for empathy that I think makes him a true son of Rimbaud — an incredibly empathetic writer who’s constantly casting himself out of his own anguished isolation and into the experience of others. As he says in the famous so-called “Seer” letter je est un autre (“I is an other”) and Rimbaud’s Is are always others’: provisional poetic identifications with various individuals.

The work opens with the following haiku, which sets the tone for the collection as a whole:

Nobody has really died

But we all feel gone

These opening lines gesture towards Moore’s interest in using the contrivances of art to conjure a shared feeling. Like the black metal song that sings of death in the cold wastes of Scandinavia, in Moore’s more macabre poems death is represented in sticky, mutilated detail, but you can’t say that anyone actually expires; nonetheless Moore creates a space in which the reader may experience the closeness of death, understand the poet’s subjects, and perhaps even begin to identify with them.

I stole your iPhone

Because I knew you had lied

I never want you to leave

I ask you if you fucked him

You look down and grin

My ass is bleeding

I don’t need your approval

FUCK ME TILL WE DIE

That photo’s not me

I would recognise myself

Don’t do this to me

I can tell you feel it

do u have any limits?

Any work that features such scenes of sexualised violence, torture, and power-play will find itself likened to the Marquis de Sade, but such a comparison would be misleading in this case. Sade voids his characters of interiority and the victims of his libidinal excesses in particular are treated no better than brainless beasts: a refusal to countenance the feelings of others is a basic feature of Sade’s egoist philosophy. Moore’s poems, on the other hand, depend upon their subjects’ ceaseless unfolding of their inner lives and there is a rawness and honesty to the diaristic way their “I” divulges intimate details to the reader’s “you.”

A less obvious but I think more productive comparison might instead be made with Joe Brainard, whose I Remember anticipates Moore’s improvisations upon the lyric subject. Each stanza of Brainard’s long poem begins “I remember”: “I remember the chair I used to put my boogers behind./I remember ‘queers can’t whistle’./I remember how many other magazines I had to buy in order to buy one physique magazine.” Using a confessional register, over the course of its 138 pages I Remember draws the reader into an identification with its protean “I” that is variously nostalgic, quirky, bored, horny, angry, elated. In a similar way, Moore has us read through 151 sad, excited, exploited, frustrated “I”s (“I never want you to leave . . . I don’t need your approval . . . I can tell you feel it”): we read their testimonies and feel their fear, their love, their desire, their anger, their anguish, their desperation.

Skeleton Costumes is an expertly wrought, formally intriguing collection but Moore’s poems are important because they draw compassion. In the world outside my window and inside my browser windows this is alas an increasingly unusual attitude: news spoon-feeds us snap judgements and cynicism, Gawker legitimates mocking callous thoughts about celebrity pain and misfortune, the ideas of the young are derided and degraded, the aged are dismissed, intimate photos of once-loved ones circulate in schoolyards and on 4chan, Twitter throws up bile in 140 character chunks . . . Sometimes it looks like a Sadean universe out there, in which, as Blanchot observed, “it is hate and hate alone which is real.” With Skeleton Costumes Thomas Moore proposes an alternative, quietly insisting upon empathy, understanding, and compassion: the world needs more like him.