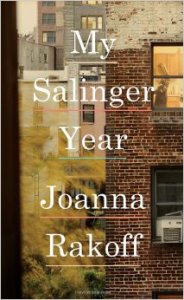 To be clear, Joanna Rakoff is no phony, though, also to be clear, that’s the charge Holden Caulfield would no doubt lay against her because her book is not what its title suggests. My Salinger Year is not, in the first place, another non-fiction narrative like Ian Hamilton’s In Search of J.D. Salinger (1988), that is, an autobiographical account of a mildly voyeuristic, mildly therapeutic year spent pursuing the life and mind of a writer zealous about his privacy. Nor is it another junior-writer/junior-lover’s post-affair tell-all, as was Joyce Maynard’s bitter, first-love remembrance of 1988, At Home in the World: A Memoir. And, lastly, it is not another 50s-come-of-age writer’s oblique homage to the Salinger world view. In year 2000, travel writer and novelist Paul Theroux put out such a book when he published the essay collection Fresh Air Fiend — whose title, of course, recalled Holden’s derogatory epithet for his tomcatting roommate Stradlater. Why the fifty-five-year-old Theroux (at the time of the 1996 title essay’s first publication) should liken himself to Holden’s much resented, sexually active, counter-self in his collection’s title, or why, more specifically, in the essay itself he should recall the Caulfield-Stradlater contrast as he analyzed the indoor-outdoor aspects of his writer-traveler lifestyle is a question whose direct answer Theroux does not supply. Still, there goes the estimable, late-middle-aged Paul Theroux, a legendarily prodigious reader/traveler/writer, finding a truth worth recalling in the graceless, adolescent Holden’s vision of humankind. No, as I say, the Salinger in Rakoff’s title is not the winking, intertextual reference that it is in Theroux’s title, and, thus, her book is neither his sort of Salinger follow-after nor any other sort with which we are familiar.

Indeed, truth be told, her book does not so much follow after Salinger as it does Dickens. I say this because, in a nutshell, My Salinger Year is the confessional of a successful, early-career writer coming vocationally and romantically of age (also earnestly and cluelessly) in paradigm-shifting publishing times. It is, in other words, a David Copperfield sort of a book.

Oh, the ironies! given Holden’s low opinion of David Copperfield. To recall, he called coming of age novels written in the Copperfield mold “crap.”

Of course, it goes without saying that the American mid-century’s teen know-it-all par excellence was absolutely wrong about books of a Copperfield character. David Copperfield itself is no slouch of a book. And, further, as per novels about writers growing up among writers — My Salinger Year’s specific sub-genre of the Copperfield class — Hemingway’s A Moveable Feast and McCarthy’s The Group both make for at least better than average reading, and both, thereby, gainsay Holden’s ill-bred dismissal of the genre. So too do these more recent sub-genre samples: Spark’s The Finishing School, Chabon’s Wonder Boys, Lee’s The Collective, Messud’s The Emperor’s Children, and Rakoff’s own first book, the novel, A Fortunate Age.

My Salinger Year, a nonfictional effort in the sub-genre, also does quite a bit to confound Holden’s unkind estimate. Its hero (Rakoff herself) is expressive and bright, but also a gull and therefore prone to the amusing sit-com-like circumstances in which, truth to tell, writers, as well as non-writers, often do take their first near-adult steps. Also to its credit, My Salinger Year offers insights into the early writing career’s rivalrous, vote-off-the-island social dynamics. Like the books named in the last paragraph, it reminds us that the process of becoming a writer is a small room/large party process, and that key to getting out of the room into the vocation’s next, less crowded holding-chamber is recognizing that those surest about the way out are not the people you want to move with. Then there are the confusions posed to the young writers of Rakoff’s specific rookie generation — her book is set in 1996 — that is, by the just-dawning digital/virtual millennium. My Salinger Year rewards in this category of instruction too. And, lastly, sadly, My Salinger Year testifies to all that is heartbreakingly treacherous in the academic bill of goods called the English major.

Indeed, the book starts with this last point. Three months prior to the author/narrator’s coming-of-age year, she had “dropped out of graduate school — or finished [her] master’s, depending on how you looked at it — and flown home from London, arriving at [her] parents’ house in the suburbs with little more than an enormous box of books”. Importantly, she had not called it quits in academia because she had a job lined up elsewhere or even because she had inklings of the kind of job that would suit her, but, instead, because she “wanted to write [her] own poetry . . . rather than analyze other people’s.” However, rather than confess this ambition to her parents, she confides her writer’s aspirations solely to her soon to be put-off college boyfriend. Thus, the parents, operating on their own assumptions, purchase for their just-graduated daughter the wardrobe they imagine she will need in the job that will be her life’s next logical step. These office-girl outfits don’t extinguish Joanna’s authorial aspirations; however, they do facilitate her following up on the suggestion of an English-major friend’s friend now editing science fiction that she look for assistants’ work in the book business. Thus, in January of 1996, Joanna finds herself working at a literary agency — “the oldest in New York,” says her encouraging placement interviewer. That the Agency (a.k.a in the real world Harold Ober Associates) was old school, declining and chiefly famous for handling the business of J.D. Salinger were things that the interviewer did not tell her. These things Joanna would find out for herself.

As per her sentimental education, Joanna also takes up with a new boyfriend in this, her groundbreaking 24th year. His name is Don. He’s thirty, an as of yet unpublished novelist, a socialist bookstore clerk, and a certifiable jerk. That Joanna goes to live with him in a sink-less, unheated Brooklyn apartment, that she alone signs the lease, and that she stays with him for more than two minutes after she discovers a poorly concealed love letter of his to a former flame tells suggests to us the limited value of a campus education in Austen, Eliot, Millay, and Rhys in terms of choosing a lover. In any event, Don is the guy Joanna chooses, and, however, inimical to her own good, the choice is an advantage to her memoir because it takes us into the writer wannabe social scene, where, as you might have guessed, smoke, debt, inflated egos, and arguably pornographic, unpublished works in progress are common.

Meanwhile, at the Agency, Joanna learns the advantages and disadvantages of a business model that is strong on tradition and weak on innovation. Her boss is suspicious of email; she communicates her typing needs via a Dictaphone; she equips Joanna’s desk with an electric typewriter rather than a computer; and, one at a time, rather than in multiple, simultaneous offerings, she shops writers’ work to publishers. Thus, her boss feels good about herself, and, thus, her business preserves its last-century character as it goes steadily into an eerie, hallowed senescence.

One of Joanna’s responsibilities is the answering of Salinger’s fan mail. Remarkably, she does this task without the contextual help that would come with having read the writer’s work. For, lo and behold, Joanna is one of the miniscule, literate few in America who got through her adolescence without ever having been required or urged to read Catcher. As she explains, whether by fate or by happenstance, no one had ever put the book in her hands and said, “You have to read this.” And now, as a young adult recently released from campus literature studies, she is “interested in difficult, gritty fictions, in large, expansive novels, in social realism . . . in Pynchon, Amis, Dos Passos . . . Faulkner, Didion and Bowles, writers whose bleak, relentless styles stood in stark opposition to what I imagined Salinger to be: insufferably cute, aggressively quirky, precious.” Still, without having ever read Salinger, she answers his mail capably, largely because, in actual fact, all she really does — all she is supposed to do — is type and re-type a slightly amendable form letter advising Salinger’s fans that, as widely reported, the Catcher author does not read letters from people he doesn’t know, though he is honored to think that his work has found resonance in the hearts and minds of so many, etc.

From this phony, boilerplate text, Joanna little deviates at the start of her office career (which is a good thing, given that any one of the letters’ writers might be another Mark David Chapman, who, to recall, sat down on the sidewalk with a paperback copy of Catcher in the Rye in hand just after shooting John Lennon). However, about half way through her Salinger year, just after Salinger himself tells her on the phone one day, “Don’t get stuck answering phones. You’ll never get out. You’re a poet,” and just before she admits to herself that her boyfriend can’t write worth a lick, she does start improvising in her fan letter responses (tamely and circumspectly, thank god). And, then, to be sure, the process of her writer’s hands’ unshackling has begun.

To be sure, as the overlain dynamics of her bildungsroman and her allusive title require, after the phone call, Salinger’s books and a few weeks of search-her soul-honesty in answering his mail also exercise formative influences on the coming-of-age writer Rakoff — to the extent that, yes, indeed, her title is as un-phony as any other on the Salinger-related writer’s memoir shelf.

So would Holden Caulfield like My Salinger Year? What if, for instance, one day he went to the library and accidentally brought home My Salinger Year, would he like it? That, to recall, is how Isaak Dinesen’s Out of Africa — which Holden liked and whose author he felt like phoning — first got into his hands. No, for what his opinion is worth, Holden probably wouldn’t like My Salinger Year. Too sane, too balanced in its aesthetic effects, too novelized — for these reasons he would dismiss it. No one who is really growing up talks like Rakoff, or is as inoffensive, or lives a life so teleologically comforting, he would think. Also, for sure, he would mistrust Rakoff’s late, teary empathizing with the bereft Franny of Franny and Zooey in her memoir’s epilogue. Pages like those at the end of a book would absolutely “kill” Holden Caulfield, and he most definitely wouldn’t feel inclined to call their author.

No need, then, Miss Rakoff, to change your phone number.