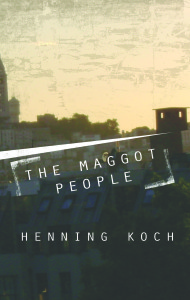 Perhaps it was foolish of me, but I went into The Maggot People expecting a kind of romantic black comedy — a piece of experimental absurdist lightheartedness, possibly, something more Terry Gilliam than David Cronenberg. Henning Koch’s debut novel is indeed absurd, but it is a much more serious, grotesque absurdity: The Master and Margarita as written by William Burroughs, a politico-religious sci-fi thriller with talking dogs and immortal maggot people. I blame my confusion on the jacket copy:

After inheriting a home in the south of France, a young man meets a woman and falls in love with her, despite her protestations that he will soon turn into “a maggot person” — a human skin stuffed with maggots and topped by a still functioning brain. Michael begins experiencing severe pains, and the young woman’s prophecy begins to take hold.

This is all true — but, of course, it only describes the first few chapters. Then, the novel becomes a bizarre, drug-fueled (or at least punctuated) adventure, filled with corrupt priests, sadistic madams, snarky prostitutes, and comatose religious figures, culminating in a series of plot twists that can only be deemed improbable, even within the novel’s fantastic world.

Talking animals, maggot people, centuries-long conspiracies — these may sound like the trappings of genre fiction, but that’s not entirely accurate. The seriousness of The Maggot People and its scathing critique of human greed push the novel closer to allegory, albeit a somewhat tongue-in-cheek version. In a 2011 interview published at The Nervous Breakdown, Henning Koch referred in passing to the New Weird, a term which lies somewhere between genre and movement. The New Weird describes a style of fantasy or science fiction whose literary influences are more likely to be Franz Kafka or H.P. Lovecraft than Isaac Asimov or J.R.R. Tolkien. The central plot mechanism of Koch’s novel, a process whereby human beings become the titular maggot people, and then immortal through a vacuum exchange of old maggots for new (disgustingly described in all its buggy glory), should place it pretty securely among such creations as China Miéville’s surgically animalized ReMade or Jeff VanderMeer’s mushroom people. The comparison becomes less apt, however, when one considers the matter-of-fact nature of Koch’s prose: terrible things may be happening, but they can generally be traced back to human foibles or errors, and there is no sense of creeping dread so prevalent within works falling under the umbrella of the New Weird.

Considering that the majority of characters in the novel can most accurately be described as conniving, greedy sadists, the frequent meditations on human nature that fill the novel are, in general, horrifically pessimistic. “People are liars. People are swine,” spits an Irish cardinal to Michael, immediately after he’s blackmailed the young man into an assassination plot. Still, humanity (such as it is) has its bright points, such as the elusive Ariel, the woman who inducts Michael into the ranks of the maggot people, and Günter, the irreverent and filthy German Shepherd who used to be a priest. Neither of these characters are precisely fully formed, “real people,” and nor are any other characters in the novel. Even Michael, the character to whose point of view the narration most closely adheres, remains fairly flat throughout the book. Yet this allows for Koch’s hilariously irreverent asides to jump from character to character, including a bizarre diversion on the ephemerality of pastry:

A thing must always be enjoyed at the perfect moment. Delay imposed a sort of moral inversion on things; what was once considered a general good would become an evil.

Colonization, slavery, industrial development had all at times been considered by various fools and villains to be aspects of progress. Yet, when compared with these monstrous historical facts, Giacomo felt there could never be a compelling argument against a custard roly-poly.

The only argument was that it must be enjoyed.

A reader familiar with Koch’s work might notice that the prose of The Maggot People is somewhat more lyrical than that of his book of short stories, although retaining an oddly conversational tone. Even abandoning any desire for a heartwarming narrative or ethical exemplars (neither of which will be found in this novel), one does encounter a surprisingly close attention paid to social ties, whether they are created through duty, love, or circumstance.

Despite the disappointment of the final section of The Maggot People, in which Michael and Ariel resurrect Jesus Christ and assist him in bringing about Paradise on Earth (not to mention an incredibly disturbing early scene involving a puppy), Koch’s novel manages to be gripping and absurd, bleak and delightful, astonishingly weird yet simultaneously familiar. Perhaps the custard roly-poly is not the only thing that must be enjoyed at its perfect moment.