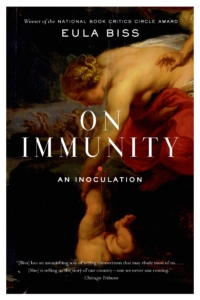 Eula Biss’s On Immunity: An Inoculation makes many important arguments, but one of the most important is buried in the endnotes. In a note to page 8, Biss claims that she is:

writing to and from the women who complicated the subject of immunization for me . . . In a culture that relishes pitting women against each other in “mommy wars,” I feel compelled to leave some traces on the page of another kind of argument. This is a productive, necessary argument — an argument that does not reduce us, as the diminutive mommy implies, and that does not resemble war.

Even this is not exactly a direct statement of the argument, which is that we should question our ideas about arguments themselves. Biss wants to move beyond polarizing, two-sided battles — specifically, battles over vaccination — where the contestants try to bring their opponents over to their side, and instead think of argument as a careful weighing of evidence, a moving forward with an open mind, an attempt to find new ways of seeing the old ideas. Her book embodies this definition of argument in its thoughtfulness and its careful consideration of what makes people believe what they do. She wants to understand, and by understanding, perhaps influence how people think. It is as though, as her subtitle “An Inoculation” implies, deep understanding is a vaccine that can protect us against the diseases of fear, bitterness, and violent rejection of those who think differently than we do.

In her attempt to understand why so many people today resist the regular childhood schedule of vaccination, even in the face of little or no evidence that vaccines are truly dangerous, Biss looks to history to help explain people’s fears. There is a long tradition of refusing to vaccinate one’s children, such as the people in 1853 London who faced the possibility of fines, imprisonment, and losing their property if they did not vaccinate, and who felt this was such a violation of their freedom they compared their situation to slavery. Resistance to vaccines has historically been a fight about individual freedom and also about power: who has the power to control their own bodies and prevent other people from jabbing them with needles or otherwise infecting them with substances claimed to be safe but sometimes leading to illness. Women in particular have not been well-served by the way the power dynamics in medical history have played out and have compelling reasons to be suspicious:

Even a modestly informed woman squinting at the rough outlines of a compressed history of medicine can discern that quite a bit of what has passed for science in the past two hundred years, particularly where women are concerned, has not been the product of scientific inquiry so much as it has been the refuse of science repurposed to support already existing ideologies.

It is not surprising, perhaps, that many women have responded to this history with doubts about doctors generally and vaccines in particular, even if their doubts are sometimes counterproductive.

Biss also explains that people’s fear of vaccines rests on a fundamental misunderstanding of what it means to be an individual. We think of ourselves as having clear boundaries that separate us from the rest of the world, and we believe that we are responsible for our own health alone. And yet each human being contains more DNA from bacteria than he or she does human DNA, which makes what it means to be an individual human being much less clear: “An alien looking down at us from outer space, an immunologist quips, might reasonably believe that we are just transportation for microbes.” Those microbes help us as much as we are helping them. And our health affects the health of others around us, particularly when it comes to immunity. One person’s decision to vaccinate their children can make it more likely that enough people in the population will be immune to stop an epidemic of disease entirely, through the mechanism of herd immunity. And yet it goes against the grain, particularly in individualistic American culture, to concern ourselves with the “herd”: “Those of us who eschew the herd mentality tend to prefer a frontier mentality in which we imagine our bodies as isolated homesteads that we tend either well or badly.” We do not vaccinate in order to protect the herd, but instead to protect ourselves, and if we fear that vaccination will cause harm to ourselves, it’s hard to make a convincing case for altruism. Biss suggests that the term “herd immunity” is part of the problem itself, and that if we changed the metaphor to that of a hive where the health of each individual bee depends on the health of the colony, the concept of shared immunity might have more success.

This book on vaccination is anything but narrow in focus: Biss discusses the complex relationship between capitalism and vaccines, for example, as well as how our long-standing cultural obsession with vampires is a way of thinking about medicine and immunity, and is “a reminder that our bodies are penetrable. A reminder that we feed off of each other, that we need each other to live.” On Immunity is not solely an argument-driven book, however; Biss also tells her own story of struggling with whether to vaccinate her son after his birth. She disperses her story throughout the book, returning to it to illuminate a point or to illustrate how complex decisions about vaccination can be. As we read the book, we follow her path of discovery. We learn of her surprise upon discovering that children are vaccinated for chicken pox, for example, an illness that does not seem all that dire and that many people of her generation and older suffered from when young. And then we learn the good reasons for giving the vaccine today: that chicken pox can lead to skin infections that are resistant to antibiotics, that some strains of it are lethal, and that the virus can lead to other problems such as shingles in later life.

Even though she comes down on the side of vaccinations for chicken pox and for other diseases, Biss portrays most of those who disagree with her in a sympathetic light. With some important exceptions, they come across as trying to do the right thing, even if they are misguided. This open-minded, questioning, empathetic tone is well-matched by Biss’s prose style, which is simple and restrained, portraying emotion without rhetorical excesses, even when her subject is personal and emotionally fraught. It seems clear from her tone that Biss has thought and felt much, but she is always in complete control of her material, able to look at it from many angles, including personal ones, while creating a voice that is both thoughtfully distanced and empathetically warm. This is an important book not only for what it says about vaccines, but for all it illuminates about our culture more generally, and for how it shows that we can argue without declaring war on one another.