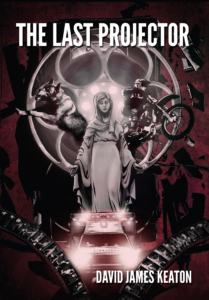 David James Keaton’s The Last Projector is the kind of multi-layered narrative that challenges readers as much as it entertains them. At once an ode to films and music, a wild tale of possible “mother sisters,” a poke at the pornographic filmmaking industry, a strange look at what goes on inside a particular ambulance, and an exploration of identity, violence, and love, this is a wild debut novel that pushes against everything standard crime fiction is known for and emerges on the other side sporting a smile and shaking the debris of the fourth wall off its shoulders.

To try to give a short, coherent synopsis of The Last Projector would be like attempting to summarize David Foster Wallace’s Infinite Jest in a single sentence. The book deals with a paramedic turned porn director whose hatred for the ever-increasing presence of tattoos in the bodies of actors threatens to destroy his sanity, an awful mystery that surrounds three generations of women who may or may not be related in an unnatural way, and two amateur terrorists who are obsessed with punishing a cop and whose bizarre love story is full of surprises. While that sounds manageable, the narrative is also about a plethora of strange fixations, a collection of unrelated stories, accidents, the process of making low budget movies, how conversations can easily take on a life of their own, and dogs. Actually, it’s a lot about dogs.

Usually staying on point is something authors stress about. Not Keaton. This narrative uses dialogue to turn getting off topic into an art form. Instead of trying to keep deviations to a minimum, Keaton allows each conversation that deviates from the main narrative to take on a life of its own, to flourish, grow, and become a special momentary exodus from everything else currently happening in the novel. The result of running with each of these micro stories, memories, and jokes is that they collectively end up being a huge pro instead of a con. The conversations here are as wildly entertaining as anything in contemporary fiction, and that includes all genres. Packed with humor and obeying the nonlinear nature of real conversations, the talks the characters engage in are unpredictable, mirthful, and regularly include stories that are long enough to be considered subnarratives. Ultimately, the author even winks at the reader through his characters, allowing them to complain or question their interloper when things get too crazy:

“What was the point of that story again?”

“Didn’t you ask why I rescued animals?”

Surprisingly, Keaton balances out the conversations with passages that show great economy of language. Usually delivered at the beginning of a new section, these fragments follow the script format more than the regular novel presentation and manage to convey a lot of information in few words and at breakneck speed:

Later that day. Massive car wreck. Fire, blood, screams, a “sandwich with the works,” the first responders call them. Three ambulances are lined up like they’re going to race later. Jack and Rick see a pile of men working on a trucker next to his upended semi, so they run for the other vehicles. They find the worst of them, a smoking Buick Regal folded almost in half, and a bloody and bruised couple fighting with police and paramedics inches away from the steam of their hood. Rick joins the melee, as jack attends to three young women crying near the curb.

While it serves to illustrate Keaton’s ability to place a reader and inform her with a single paragraph, the preceding lines also serve as an example of the brutal, bewildering, and unabashedly intense kind of prose that fill up the almost 500 pages of The Last Projector. The gore is enough to satisfy fans of hardcore horror, the sex and violence are always shown together with the honesty of an X-rated documentary, and everything from car accidents and vicious dog attacks to a broken penis and talks that include punches to the face are hurled at the reader without any time for rest.

Keaton has a unique voice that makes his characters seem slightly unhinged and revels in the gritty side of life. That being said, there are echoes of a diverse group of outstanding authors here, and that diversity makes reading The Last Projector a literary treat. For example, Harry Crews’ weirdness is here, along with Elmore Leonard’s knack for dialogue and a playfulness (especially when it comes to the name of the police officer the two young aspiring criminals want to scare) that brings to mind Cuban giant Guillermo Cabrera Infante.

Perhaps the most impressive thing about this novel is that it’s Keaton’s debut. He has published short stories in many venues and his short story collection, Fish Bites Cop!, received many accolades. However, a novel is a very different thing, and he pulled off delivering a powerful and strange narrative that demands attention.