The Anatomy of Dreams – Chloe Benjamin 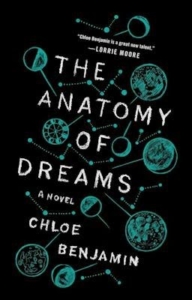 The Anatomy of Dreams, were it a movie, would be an excellent winter blockbuster. A debut novel about two young people, Sylvie and Gabe, who fall in love and become dream researchers, it has the sexy, fantastical element of lucid dreaming; a fair amount of sex itself; and useful, quirky characters that seem to flow into whatever attitude best suits the plot. However, as a novel, it falls flat — Benjamin is given to long paragraphs of exposition, where history is quickly laid and much of the dream-theory is laid out in “what if this? what if that?” dialogue reminiscent of an introductory philosophy class.

That’s not to say that Benjamin doesn’t have a deft hand with prose: the parts that shine to me are the parts where the consciousness of the author isn’t present on the page. The self-consciously expository nature of much of the novel feels like what it is, exposition, but there are passages where the writing is absorbing and even magical. Sylvie, the narrator, is given to occasional moments of profundity, where the edges of her presence in her narrative disappear and she, and the reader, become fully absorbed in setting and story. Of the approaching millennium:

As we drew closer to the year 2000, even the most skeptical among us wondered what the millennium would bring. In my psychology course, we spent a unit on millennium predictions — the Tribulation, the second coming of Christ, the war of Armageddon. Some of the other students complained of nightmares. But I found myself magnetized by the predictions, the Rapture especially — all of the living and born-again dead rising into the sky like paper lanterns, their bodies lit from the inside and translucent as white sheets.

But for the most part, we are all too aware of what is going on. It seems as though almost every detail is loaded with some underlying meaning, close to the surface. Perhaps Benjamin has taken her protagonist’s lines too closely to heart:

“The brain is like an excellent fiction writer: every part of a dream is laden with meaning that can be unlocked, analyzed, and understood,” Sophie says, in an extended conversation that serves to lay out much of the underlying Freudian/Jungian dream theory that buttresses the book.

Need everything in a book be so heavy-handed and symbolic? Unlike a short story, in a novel there’s room for freedom, for passages that exist for no other purpose than to be absorbing and beautiful. Too many sentences feel freighted with meaning — too small to be foreshortening, too clunky to seem clever in hindsight. Throughout the novel, I was not convinced of Sylvie’s love for Gabe, or her love for anyone, really. Fated as it might have been, to state something doesn’t necessarily make it so for the reader. If there was a great love affair in Dreams, it was between Keller and his research.

Indeed, where the book shines is in its depiction of failure, of the cogs in the academic machine that make Sylvie and Gabe (underlings in their mentor Keller’s grand dream scheme) exhausted research assistants wondering if their morals are in the right place. I picked up Dreams expecting it to be a campus novel given the blurb; of course, it was nothing of the kind. Instead, if anything, it was an excellent portrayal of the drudgery of academic research, and of the intellectual and emotional stress incurred by attempting to maintain the productive facade of a field of study no longer trendy or useful. Gabe is committed to the lucid dream research project; Sylvie, less so. (Her main motivation for the work seems to be feeling competent and useful.) When the misadventures of a former research subject threaten the integrity of their work, not to mention their funding, the three academics leap into action. They are doing important work, or so they want to believe.

If Dreams is trying to be a novel about Ideas, it’s almost successful. I wanted to read more of the research and less of the love story — I wanted that exploration of failure, that moment of truth where the Idea is shown to be less than the holy thing it was painted as, and the PI is no longer a saint. There’s something particularly touching about a field of study gone out of fashion — like an old flame or an ex-boyfriend, it’s something so loved that is now lost and faintly ridiculous.

In fact, perhaps the merit of the love story at the center of Dreams, that between Sylvie and Gabe, is that in the end it is a failure, too. Sylvie grows up and moves on, away from her high school sweetheart. There is the obligatory moment of emotional resolution, but like a research project that can no longer sustain itself, what seemed fated becomes quiet, an afterthought or punctuation mark. As what it’s marketed as, Dreams is a book that is better suited to the landscape of film and the cinema’s emotional pacing; I am tempted to suggest an alternate reading: that it is a novel about failure, and waking up.