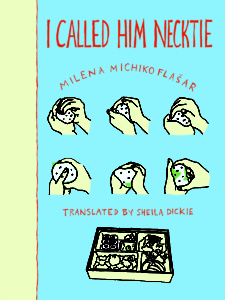 Things that are naïve, probably: children, babies, animals, sentences involving lots of different colors, plants, common names, most descriptions of food. Things that are not naïve, although they initially appear so: I Called Him Necktie, which contains all of these elements; and its narrator, a young hikikomori beginning to reenter the social world. The naïveté that I assumed of the novel — its short chapters, its plain-spoken protagonist — is in fact a carefully plotted simplicity that allows Flašar to quickly probe, with unnerving accuracy, complex themes of familial love, depression, literature, suicide, and growth.

To be a hikikomori means to be a shut-in, a social recluse, often young and male, who stays at home to pursue his obsessions, avoid human interaction, or both. Flašar’s hikikomori, Hiro, is one in the midst of his reemergence to the social world: he sits on a bench in the middle of a park near his home, and has daily conversations with a businessman who has lost his job, whom he calls Necktie, because of the tie he wears striped gray and red. Rather than plumb the lurid pop-psychological conclusions of the social phenomenon, Flašar uses the character of the hikikomori to funnel the human condition into a dense and earnest monologue, which sparkles with slight and incisive observations.

After the businessman confides in Hiro his real reason for sitting all day in the park, and his conflicted emotions regarding whether to inform his wife, Hiro ponders what he ought to say in return:

Where to start? I was looking for something that would be worthy of what he had said. It’s difficult, I said. The first thing that occurs to me is that it is difficult to tell something. Every person is an accumulation of stories. But I. I hesitated. I am frightened of accumulating stories. I’d like to be one in which nothing happens.

Necktie’s simple structure, told in Hiro’s voice without dialogue tags or quotation marks, forces the reader to experience the novel in first person. Though conversations take place, both in real-time and remembered, the lack of dialogue attributions blur what is said and what is unsaid. Indeed, it is unclear which character experiences what events, as they all seem to fall into a collective memory of alienation, grief, and loss.

Flašar’s simply written narrative effectively guts the reader through a series of tragedies and their attendant realizations, all painfully emotional because of their immediacy and their scale. Necktie is, I should tell you, the first book in three years to have made me cry. We realize: Hiro is the way he is because of two deaths that happened earlier in his life, and once we find out we are sadder for it; we didn’t see it coming, nor did he. We realize: no one is what they seem. We realize: everyone has private tragedies; everyone is a tiny book.

Am I still writing? Unthinkable not to. In the very darkest night the words were like shiny pebbles. They caught the light of the moon and stars and reflected it back. One word among them that shone especially brightly. Simplicity. I would approach it, stepping softly, regard it from all sides, finally pick it up, enchanted by it, recognize that its enchantment lay in its shine, its pure meaning. Simplicity. To simply be there. Simply keep going. The longer I kept going, the easier it was to see how beautiful, simply beautiful, it is to be here.

Throughout the novel, Hiro, emerging from his solitude, describes life alternatively as story, poem, or song. His references are almost self-consciously literary: he is aware of how he writes and describes his life, and it was the fear of becoming a story that kept him from becoming at all. Perhaps it is touching, then, that we can only hear Hiro’s story first because he has had the opportunity to share it with his businessman friend, and was solitary no more. The novel he narrates is a secondary act of sharing; he narrates because he wishes to tell it to our listening ears. I Called Him Necktie is an exchange of stories, a relating of histories in all senses of the word. Relate means to tell, but also it means to empathize. Lives are stories, Flašar emphasizes, and it is only in the exchange of them that their potential, however sad or joyous it may be, is realized.