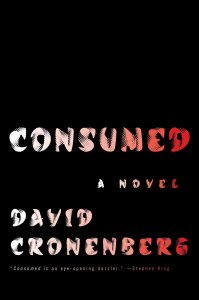 Consumed, the new novel by Canadian cult filmmaker David Cronenberg, reads like what it is: the first work in a new medium by a mature, accomplished artist from another medium. Consumed is characteristically Cronenberg, packed with bizarre sex, stomach-twisting body horror, and humanity-transforming technology. But while it’s a clear descendant of films like Videodrome, Crash, and eXistenZ, it’s also a first outing, weighed down by awkward sentences, muddied themes, and odd choices. Despite that, Consumed will trigger tremors of joy for fans of Cronenberg’s body-horror films.

In its complexity and narrative sprawl, Consumed resists quick and spoiler-free summarization. Taken broadly, it’s the story of Naomi and Nathan, journalists specializing in the strange, garish, and gruesome. Naomi is focused on Aristide and Celestine Arosteguy, radical French philosophers, Marxists, hedonists, seducers of students. The pair present a juicy story: Celestine has been reported murdered and cannibalized by her husband. For his part, when Nathan contracts a previously eradicated STD from a patient receiving experimental cancer treatment, he seeks out the disease’s namesake doctor, sure that the STD’s reemergence will lead to a story. As each of them digs deeper, they’re drawn into mysterious relationships, psychological dysfunction, and eerily parallel events.

Among David Cronenberg’s greatest strengths is his ability to clearly articulate the themes and ideas he cares most about. Even his breakthrough film, 1974’s Shivers (aka They Came From Within), despite being an early work, offers the fully realized venereal horror he’d pioneer over 10 ensuing films. And while Cronenberg has been away from that genre for more than a decade (in recent years, he’s favored crime and drama), time hasn’t dulled his command of the material.

Consumed‘s treatment of exotic and unusual STDs, the line between mental illness and unpleasant insight (for a glimpse of exactly how unpleasant, watch this very NSFW short film he recently made, which shares themes with Consumed), uneasy sex, and gore is assured and well executed. The novel so nimbly restates Cronenberg’s themes and interests that it’s easy to imagine it as his next film (or, given its scope, TV series). But while his thematic mastery is undisputed, his prose is weaker. The first half of the novel is thick with rough, unwieldy sentences that remind you that the author is new to the medium, such as:

For Naomi, internet ‘sampling and scratching’ was a completely valid form of journalism, presenting no ethical clouds on its open-source horizon.

Naomi dug her BlackBerry Q10 out of the roller’s side pocket. She preferred it to Nathan’s iPhone in any text-intensive context like the ones she usually found herself in; she needed real, physical buttons (you couldn’t type on an iPhone when you had any decent fingernails) and was dreading the possible imminent collapse of the BlackBerry empire. Such was the perilous life of the ardent tech consumer.

Happily, the writing in the second half of Consumed smooths out and it becomes a fairly propulsive read.

That Cronenberg is most comfortable working in a visual medium also presents problems of character identification and empathy. Some of his best films externalize their characters’ inner conflicts (the murderous monster babies of The Brood, for instance). By externalizing emotions and depicting them visually, Cronenberg has created a globally acclaimed body of work. But in a novel, a form more tuned to excavating the interior than externalizing it, the dearth of emotional insight alienates the reader from the characters.

The ideas that possess Nathan and Naomi and Aristide are clear, but not what emotions they feel or what motivates their actions. Why is Nathan so attracted to the cancer patient? Why is Naomi willing to take such potentially fatal risks? The reader’s knowledge of what transpires within Nathan and Naomi is scarcely different from observing their actions and words, leaving the novel a compelling page-turner but not one, perhaps, whose depth of character will compel you to return.

Another of Cronenberg’s core themes revisited is our use of technology and the way it uses us to change the function of our bodies — think of the lumbar game ports in eXistenZ or Crash‘s auto-wreck fetishists who injure themselves to create new orifices to penetrate. Here, that obsession with technology — hearing aids, of all things, play an intriguing role — is transformed into an interest in consumerism (Consumed is concerned with meanings of the word beyond simply the gustatory).

Cronenberg obsessively catalogs the brands of cellphone, laptop, tablet, voice recorder, and camera lens, used by his characters. In doing so, he evokes an off-brand William Gibson. But where Gibson’s use of brands anchors his work in the very now in which we’re reading and describes our relationships to non-human, but no less influential, entities, Cronenberg’s isn’t as effortless. He comes off like a name-dropper who sometimes gets things wrong (he writes about a Macbook Air’s hard drive spinning; the Macbook Air uses solid-state storage, so its hard drive doesn’t spin). Precisely what the brand obsession amounts to is unclear. There seems to be a point about people being consumed by the things they consume, but it’s underdeveloped.

The novel’s ending is equally shaky: major characters vanish from the narrative, key new characters are introduced with just pages left, and the entire affair concludes on an obtuse note. Despite that, Consumed is a skin-crawling, disturbing, fun novel. And, for fans of his horror films, it’s a welcome return to Cronenberg’s classic form.