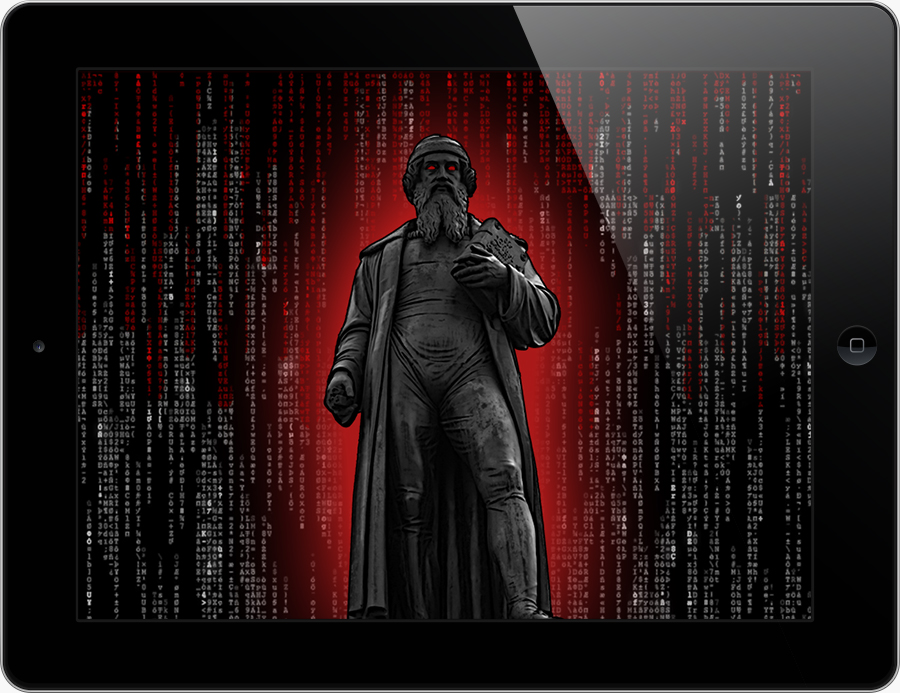 Today, Johannes Gensfleisch zur Laden zum Gutenberg is best known as the inventor of the printing press. But Gutenberg was responsible for much more than that. As he predicted: “A spring of truth shall flow from it: like a new star it shall scatter the darkness of ignorance.” History would prove Gutenberg right. By making the mass production of text economical for both printers and readers, Gutenberg liberated knowledge and paved the way for the Renaissance, the Enlightenment, the scientific revolution, and the nearly limitless flow of information that many of us take for granted today. Unfortunately, despite his remarkable imprint on the future of knowledge, Gutenberg died relatively unknown in 1468, and most of the details of his life, as well as his gravesite, have been lost to the ages. To help rectify this, we sat down with Full Stop’s medium-in-residence, Tad [find out last name], and fired up the Ouija board app on Alex’s iPad. After a moment of confusion over who was moving the planchette, we realized that it was none other than the titan of typography himself, Johannes Gutenberg.

Alex Shephard: We appreciate your being here. We have prepared just a few questions for you about your life, as well as the information age that your great innovations helped bring about.

EJ: Many say that the Arab Spring, a series of revolutionary demonstrations and civil wars that has swept the Arab world, has progressed in large part due to Twitter and the unprecedented access to rapid information that it allows. When you invented the printing press, did you imagine that the spread of knowledge would facilitate the toppling of regimes?

AS: Oh. Hmm. So, Twitter is a social network that allows people to send and receive short messages, which can be read instantaneously all around the world.

EJ: This is going to take forever.

(A voice booms from the speaker.) Can you hear me?

AS: How did you do that?

There is so much information in here!

AS: You can see my files?

Marvelous! So many different people! These are being composed as we speak?

EJ: They are. You know, between 99 and 100 percent of adults in your native Germany can now read and write. That is thanks, in no small part, to your —

What is this #amwriting I keep seeing?

AS: It’s a popular way for people on Twitter to come together to talk about writing. Thanks to you, almost anyone can write a book now.

But how can they be writing if they are doing this?

EJ: Well, they’re not actually writing. They just want people to think they are.

Why would so many people pretend to be writers?

AS: People think writers are smart and interesting. As a famous writer said, “Women will sleep with you even if you write a bad book.”

But what about the truth of God’s glory? Where is that on here?

EJ: Twitter has that, too. Who’s good for this?

“Live the life of victory and abundance that God intended for you.” What the hell is he talking about? God doesn’t care about our victories and abundances!

EJ: This is just an example, Mr. Gutenberg. There are hundreds of millions of people on Twitter. Not all of them are great thinkers, but there are —

Who has the most followers?

(Gutenberg opens Katy Perry’s page.) Is she a religious figure, as well?

“IT’S OKAY HELLO KITTY FANS, KITTY PURRY IS A CAT.” Tell me, what does this mean?

EJ: Well, Hello Kitty is this cartoon character that everybody assumed was a cat, but then we found out she’s actually a human girl that just looks like a cat. I don’t know who Kitty Purry is, though.

(Gutenberg opens the browser and finds the Katy Perry Wiki.) It says here that “Kitty Purry is one of Katy’s 2 cats, the other being named Monkey.” But why do we need to know the names of a singer’s cats?

AS: Twitter is just a place for people to post their thoughts. You can also read about important news.

EJ: Maybe we should take a look at Project Gutenberg. It’s named after you and —

No, I’ve seen enough! All of this must be erased! We must begin anew!

AS: Well, you can’t just delete it. All of this information is stored —

(Our phones light up. We watch as our Twitter feeds disappear, our RSS readers empty.)

(We watch as the internet repopulates.)

But I — it didn’t even notice. How can you correct that which creeps mindlessly forward with no concern for where it has been?

Silence! I know what I must do.

(All of our screens turn black. Our phones, our laptops, our television. They then fill with code.)

EJ: What are you doing?

I must scatter the darkness of ignorance that has fallen over this world. Once and for all.

Tad: What is that timer?

AS: Maybe he’s launching a new site — some great hard news site, with like data and stuff, that will revolutionize journalism.

(A global map appears behind the timer.)

AS: See? It’s an infographic!

(Red dots begin to blink in the US, Russia, China, England, India, Israel.)

After scanning the entire internet, I have concluded that humans are beyond redemption. What good is a perfect tool if those who use it are flawed? There is only one way to banish ignorance from this world. Eliminate humanity.

Tad: Maybe we can cut him off at the source! (He tries to turn off the iPad, but when he touches it, he begins to convulse as electricity flows through his body. His smoking corpse falls to the floor.)

EJ: We have to stop him. What if we cut the internet?

EJ: Then there’s only one thing we can do. (He picks up a baseball bat.)

EJ: We have to destroy it, Alex!

EJ: Why the hell not?

AS: Because — because it has Flappy Bird on it. Do you know how much that’s worth?

EJ: Are you serious, Alex? You’re really — wait, it has Flappy Bird?

AS: What are you talking about?

AS: Move past it.

Gutenberg: See? Even with the world as you know it about to come to an end, all you want to do is play mindless games.

Gutenberg: There is only one control, you imbecile. Watch and tremble as I finish what you could not.

(Gutenberg makes it to level 38 before hitting a pipe and crashing to the ground.)

What? There’s no way I hit that!

(He starts again. He makes it to 38 again, hitting the same pipe.)

AS: Those drops are tough. You —

(He starts again. This time he messes up on the third pipe.)

(The screen is a blur of birds and pipes.)

EJ: Alex, before we die, there’s something I want you to know!

EJ: You remember that time when — wait, what’s happening?

(The iPad restarts. All of the screens return to normal.)

AS: That was close.

AS: So what do we do about Tad?

AS: Do you have their number?

EJ: I don’t know Tad. You’re the one who hired him.

AS: He answered the Craigslist ad and said he would work for a place to sleep. I didn’t grill him.

EJ: That’s how you picked our medium-in-residence?

AS: All the others wanted course credit.

EJ: Oh, fuck that. I think I know a guy who will do it for a sixer.

(We step over Tad and out the door.)