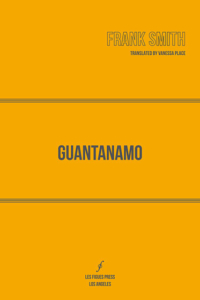 America’s military prison at Guantanamo Bay has now been operational for over twelve years. Its camps persist as a testament to the control of bodies, but like everything in the War on Terror, Gitmo is also fundamentally about a battle over language. The men incarcerated there have been called “prisoners,” “detainees,” “combatants,” and “terrorists”; depending on who’s talking, they’ve undergone “torture,” “enhanced interrogation techniques,” or most cynically, an “alternative set of procedures.” Even now, as the prison begins to settle at the edges of the American consciousness, military PR continues fine-tuning; in March, the Pentagon revealed a 24-page guide, “Medical Management of Detainees with Weight Loss,” where, among other things, “hunger strike” has been recast as “long term non-religious fasting.”

Frank Smith’s Guantanamo, originally published in French in 2010 and recently translated into English by the conceptual writer Vanessa Place, focuses on a moment in the prison’s history when the fight over language and classification was particularly loaded. The 2004 Supreme Court decisions in Hamdi v. Rumsfeld and Rasul v. Bush ruled that all Gitmo detainees were guaranteed the right of habeas corpus, a move that eventually led to the formation of Combatant Status Review Tribunals (CSRTs). At stake in these military-led, closed-door hearings was a question of naming, specifically whether or not a prisoner was an “enemy combatant.” It’s a status that carried profound consequences — either hope of release (which eventually happened with both Hamdi and Rasul) or a position beyond the reach of the U.S. courts as an indefinitely detainable body.

Smith’s book appropriates a number of the CSRT transcripts (all the declassified originals are available here), transforming them into unnerving bursts of text that lay bare language’s role as a tool of political and military force. The stories the detainees tell are patchy and truncated. One young Kazakhstani prisoner claims he moved to Afghanistan to grow vegetables for the government. Shadowy figures — denoted by Kafkaesque initials like “S” and “J” — appear sporadically to promise work in a foreign country or to steal a passport. There are numerous accounts of simple misunderstandings, of a person turned in under false pretenses or as the victim of a personal grudge, of crucial documents that have simply gone missing. “That we had documents proving that we worked for the government,” one detainee explains, “That we kept them on us, but we don’t know what we did with them.” Out of these pieces we construct larger narratives, but the stories remain persistently incomplete, often absurdly circular. The two sides talk past one another, leaving the most critical information obscured:

The interrogator says the interrogated received two weeks of training on the Kalashnikov rifle.

The interrogated says the part about the two weeks is right.

What exactly is being admitted to here, we wonder. That two weeks, at some point in the past, transpired? What “part” is the prisoner referring to? Rather than offer answers, the transcripts quickly move on to a separate set of questions about Tora Bora.

We know the detainees’ accounts, offered under duress in a state of exception, can’t be trusted. But neither can the narratives constructed by their interrogators. The CSRTs’ teleological bent — the drive to establish “enemy combatant” status — means that any object, any confluence of disparate events (“The detainee was in Afghanistan during the bombing campaign in the United States”), or any stray detail can imply guilt. These loaded, post-facto narratives are also highly suspect, and there are numerous moments when the interrogators’ ostensible logic leads to reach absurd, terrifying conclusions:

It is said that at the time he was captured, the interrogated had a Casio watch, model F-91W, used by Al Qaeda to make explosives.

The interrogated says that this evidence is surprising. That millions of people around the world wear this kind of Casio watch. That if it is a crime to own one, why not condemn the stores that sell them and the people who buy them? That a watch, that’s not a logical or likely piece of evidence.

As it is in Beckett, the detainees’ language in Guantanamo becomes a product of extortion. Those who coerce it are anonymous; the names of the CSRTs’ presiding officers remain classified. But they’re informed and protected by a pernicious kind of power — one where the threat of absolute force comes packaged in a cynical, evasive rhetoric. Again and again in the transcripts, loaded questions surface without any explanation from the interrogators: “What does it mean when the U.S. government says that you have ‘family ties’ with terrorists?” The passive voice predominates: “It is said that the interrogated is associated with Al Qaeda.” Pronouns float without clear antecedents, a quality Smith accentuates in French with his liberal use of the open-ended pronoun on. At a few points you lose track of who’s speaking, further muddling the search for clear distinctions between “we,” “you,” “they,” and “I.” Moves like this offer rhetorical cover for the interrogators while simultaneously reinforcing their power. In one exchange, as the presiding officer deflects a series of direct questions, you can’t help but hear in her denial the echo of the semantic black hole in Magritte’s famous negation

Detainee [addressing the President of the Tribunal]: She’s the judge, her? You’re the judge, you?

President of the Tribunal: No, I’m Officer of the Military Tribunal. This is not a court.

Our search for even the semblance of linguistic certainty or stable meaning is further frustrated by the fact that Guantanamo comes to English readers as a multi-layered translation: the original questions posed by Americans were answered in languages like Pashtu, Uzbek, and Arabic, that were then translated into English. Smith translated that English to French before Place translated it back. We can only wonder at the losses and approximations involved in each step. Place’s parallel translation, where the French transcripts regularly extend beyond their English counterparts, shows how different even the two closely related tongues are, a stark visual reminder of language’s slipperiness, of our lack of an original Logos on which all other words depend.

We know all these things about language already. But as one pores over Guantanamo’s transcripts, what makes them so heart-hollowing is the way they show how in a sea of linguistic uncertainty, the locus of meaning, that original word, is more often than not established solely through force. To call a detainee an “enemy combatant” is a project loaded with bottomless ontological implications. But when the CSRT invokes their source for indisputable and infallible evidence, they appeal to a list, a non-descript handbook authored by a faceless, bureaucratic unmoved mover:

We say that according to the Reference Guide to Terrorist Organizations of the United States Department of Homeland Security, HIG [Hezb-e-Islami Gulbuddin] has long-standing ties with Osama bin Laden.

“We say we know nothing about this. We never dealt with them,” the detainee responds. But in this world that doesn’t matter. The reference guide, another iteration of the systems of force that inform the interrogations, is a depressing example of how power actually works — a reminder that what ultimately establishes the meaning of words is cold, brute force. Cheney, Bush, Wolfowitz, Rumsfeld, and the rest of their ilk knew this too well. It’s also something all Americans, as citizens of the most militarily dominant empire in history, tacitly endorse. A state of exception, where an appeal to public safety justifies the suspension of law, doesn’t just happen. It comes about as a matter of will, that anonymous bureaucrat who gnarls through gritted teeth, “It is because I said so.”