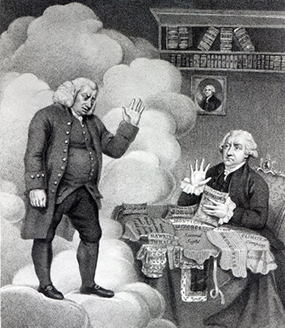 Few men have left as indelible a mark on the English language as distinguished poet, critic, essayist, and lexicographer Samuel Johnson. Born 1709 in Lichfield, Staffordshire, Johnson is perhaps most well known for his classic dictionary of the English language, his biographies of English poets, and his short tale “Rasselas.” In the story, Johnson, who died in 1784, writes: “There is no people, rude or learned, among whom apparitions of the dead are not related and believed. This opinion, which perhaps prevails as far as human nature is diffused, could become universal only by its truth.”

To prove Johnson right, I sat down with Alex Shephard and Full Stop’s mystic-in-residence Bryce [find out last name] to contact Dr. Johnson on the other side. After sacrificing one of our interns, we recited the incantations and entreated the ram-bearer to deliver this preeminent man of letters. Two or three interns later, the room began to smell of sausage and we knew we had our man.

Samuel Johnson: Why have you woken me?

Alex Shephard: We appreciate your coming. We have prepared just a few questions for you about the development of the English language, as well as the role of criticism and commentary in the information age.

EJ: In your dictionary, the entry for take is over five pages long, comprising 134 definitions. You also preferred traditional spellings such as o-l-d-e to simpler, modern spellings like o-l-d. As someone who “takes” words so seriously, how do you feel about some dictionaries adding figuratively as a definition for literally, or the use of internet slang like LOL in everyday speech?

AS: Oh. Hmm. We kind of thought that you would have kept up with things on this side. So, the internet is like — it’s a global network of computers and databases and —

Bryce: Let’s just show him real quick. So this is a computer, and if we tell it your name — Samuel Johnson — it returns almost a million results, a million documents, accessible around the world, that mention you. And if we click on this top result, we can read about you on your Wikipe —

AS: Anything you want information on. You can search for text, pictures, vid —

Pictures? So, hypothetically, one could request, say, ample bosoms, just as an example, and it would deliver to him illustrations of such bosoms?

AS: It would. And not just illus —

Poh! Who, sir, said anything about the solar system? I said, “ample bosoms!”

EJ: We should really get back to —

Yoicks! And who, my new friends, is this radiant negress?

AS: That’s Beyoncé, Dr. Johnson. She’s a popular singer. But the word ne —

It’s like she’s right here in the room with us! By jingo, what kind of black magic is this?

EJ: You know, Dr. Johnson, your dictionary was also considered innovative for its use of illustrations. What role do you think —

(Johnson enters Bryce’s body, taking control of it. He clicks a link to the video for “Drunk in Love.”) There’s a whole world inside here! And look at that figure! (He knocks on the screen.) Excuse me, miss, but you know, Samuel Johnson has always supported your people’s —

AS: I’m afraid she can’t hear you, Dr. Johnson. Now if you’re done, may we ask you about —

What is happening now? Where did this camel-faced man come from?

EJ: That’s Jay Z. He’s kind of like a poet. And we don’t really make fun of him for looking like a camel anymore.

AS: Dr. Johnson, your interest in these things is a bit surprising, given your reputation as a staunch opponent of lust and sensuality.

Go ahead, sir, take a whiff. Tell me how staunch it smells.

AS: I’m sorry, but all I can smell is that meat odor that has been here since you appeared.

Why, sir, do you insist on calling me Dr. Johnson? I deplore that odious title.

EJ: I’m sorry Dr. — Mr. Johnson, but your friend James Boswell frequently refers to you that way in his biography of you.

EJ: It’s considered one of the greatest biographies ever written!

(The ghost of James Boswell appears.)

James Boswell: What’s going on? Where am I?

SJ: There you are, you bloody rantallion.

SJ: What did I tell you about putting my name out on the streets, Bozzy?

JB: Bugger off, Sam! (He pulls a razor from his boot.) I did your scrofulous arse a favor!

(Johnson reaches out and pulls Boswell into Bryce’s body. The lights flicker as Bryce begins to convulse. Suddenly, Bryce’s limp body flies across the room. It bangs from wall to wall, corner to corner, ceiling to floor, before finally crashing down onto the table. The lights return to normal, and the smell of sausage fades. Johnson and Boswell are gone. Bryce is dead.*)

* Are you a psychic, medium, or mystic interested in a part-time/part-space position? If so, Full Stop would love to hear from you. We do not offer pay, benefits, or school credit, but we do provide floor space in our offices, located on an uncharted, tax-exempt towhead on the historic Tug Fork River.