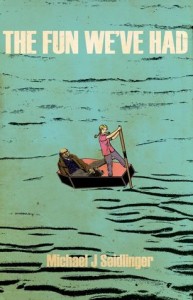 Michael J. Seidlinger is one of those chameleonic writers who reinvent themselves for each book. With The Laughter of Strangers, his previous release with Lazy Fascist Press, he delivered a radical narrative in which a third omni-everything voice served as conscience, conspirator, and antagonist. After that effort, it would’ve been understandable if his next novel reverted to a more standard and less demanding format. That didn’t happen. Instead, The Fun We’ve Had, Seidlinger’s latest, is a story that pushes the boundaries of what fiction can achieve within a very limited microcosm and with only two characters.

In The Fun We’ve Had, two lovers, one an older man and the other a very young woman, are stuck in a coffin, floating aimlessly on an endless sea. They come from a place they can’t remember, have no names, are unsure of their destination, and their existence hangs somewhere between life and death. There’s no time, and space is meaningless, so the lovers only have their thoughts, each other, and whatever their love has morphed into in this strange place. They acquire a purpose as the relationship begins to crumble: to try to salvage themselves and each other as they row all the way to whatever comes next.

There’s an intangible and incredibly furtive spring of pure narrative that runs miles below the majority of fiction. For the most part, it remains untouched. Luckily, sometimes writers like Italo Calvino tap into that source, and what comes from that is unpolluted storytelling. With this book, Seidlinger shows he has tapped into that vein. The prose in The Fun We’ve Had is a strange mix of philosophy, gallows humor, love, and poetry that adds up to gripping, beautiful storytelling completely devoid of gimmicks and clichés. While that would have been enough to make this a must-read for fans of great fiction, Seidlinger takes things a step further and repeatedly shatters the fourth wall, simultaneously driving each line deeper into the reader, shining an invisible light into the things that occupy the blank spaces on the page, and turning the narrative into a self-aware beast that is as important as, and far more powerful than, the two floating lovers:

This is a line written to fill in for what she cannot express. This is another line written for all the lines she will never be able to say, much less explain. And this line represents the halves that she’ll never identify. Every other line is written using the half that still remains, the half that keeps glancing at her when she isn’t looking. It’s the only half of her that’s left, and it’s the part of her that she does not want to see. The rest became part of the telling.

There are a plethora of elements at work in The Fun We’ve Had, and a rich collection of scenes that invite deconstruction, including a bizarre ritual in which the lovers exchange eyeballs and an apparition of the woman’s mother at a crucial time. However, despite the lushness of the author’s imagination, one of the most praiseworthy things about this story is that the majority of the narrative takes place inside a coffin without that reduced space ever becoming boring or affecting the story negatively. With each argument, memory, implied possibility, accusation, and action, the lovers contribute to the creation of a universe that exceeds the limitations imposed by the small vessel that contains them. The disparity between their physical reality and the vast world their emotions generate is made even more thought-provoking by the fact that their microcosm is constantly moving in an infinite ocean.

While The Fun We’ve Had has enough smarts to entertain scholars, it also touches on everyday situations and holds up an unforgiving mirror that shows the petty nature of most human relationships. As the directionless drifting occurs, a maelstrom of emotions swallows the lovers and pushes them against each other, but weird rituals aside, their issues are not unlike those of every other couple out there. Without space or time, only feelings are left, and the only way to fight the numbness that their undead state has infected them with is to try to cause the kind of pain that transcends impassiveness:

Words without reason are words burned like kindling for fires of anger. For this: A fight to pass the blame. Neither to be blamed when in fact both are the leading cause, both are burdens on each other. He enabled her as much as she enabled him.

And so they conjure up bad times.

They hurt themselves, and each other.

The Fun We’ve Had is a smart novel that inhabits the interstitial spaces between reality and fantasy, life and death, love and hate. It also dares to explore that strange nonspace that lies between death and oblivion. This book, to be fully enjoyed, demands a curious reciprocity between reader and text because the reader becomes the couple and the prose morphs into a direct conversation, punctuated time and again by a question that interrogates on more than one level: “Are we having fun?” And the answer to that is a resounding “Yes.”

Gabino Iglesias is a writer, journalist, and book reviewer living in Austin, TX. He’s the author of Gutmouth (Eraserhead Press) and a few other things no one will ever read. His work has appeared in The New York Times, Verbicide, The Rumpus, HTMLGiant, Entropy, The Magazine of Bizarro Fiction, Z Magazine, Out of the Gutter, Word Riot, and a other print and online venues.