Ti West’s The Sacrament and the Dangers of Fictionalized Horror 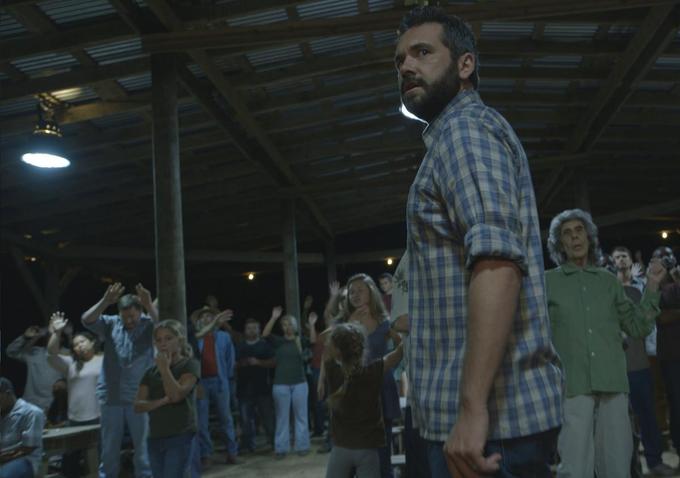 Scene from The Sacrament

A delicate boundary separates horror that springs from imagination and horror that, as they used to say on TV, is ripped from the headlines. Appropriating real-life horror can seem exploitative — reducing the deaths of real people to plot points and jump scares — even when those headlines are 35 years old. And, if the movie that employs that real-life horror hews so closely to the facts that it’s practically a dramatization, tension is bled out and the scares telegraphed by history.

That’s the case with Ti West’s new film, The Sacrament. Writer/director West has made some compelling horror movies, including the ’80s-horror-homage The House of the Devil, but The Sacrament isn’t one of them. While it’s effectively composed, some performances are spellbinding (especially star Gene Jones’), and the music unsettling, The Sacrament doesn’t transform history into art.

Movies about cults have enjoyed a mini-boom in the last few years, starting with Kevin Smith’s under-seen and terrific Red State in 2011, and continuing with Gareth Evans and Timo Tjahjanto’s “Safe Haven” short in 2013’s V/H/S/2. It’s impossible to view these films apart from the cults that influenced them: David Koresh’s Branch Davidians in Red State, Jim Jones’s People’s Temple in “Safe Haven” and The Sacrament. While “Safe Haven” transformed the Jonestown story into an immensely entertaining high-speed, Southeast-Asian supernatural explosion, West here re-stages Jonestown in disappointingly faithful detail.

In The Sacrament, a pair of reporters from Vice accompany Patrick, a New York photographer, to visit his former-addict sister, Caroline, in Eden Parish, a back-to-the-land, social justice, sober-living compound in an unnamed country that closely resembles Jonestown’s Guayana. Intrigued by Caroline’s reports of near-utopia, the Vice crew sets out to investigate. Eden Parish presents like its namesake garden, a self-sustaining community where racism has vanished and people live in happiness and health under the watchful guidance of Father (Jones, playing a weird, entrancing combination of Larry Flynt and Kim Jong Il). Needless to say, there’s a snake in the garden, as the crew discovers when they scratch the surface.

That things aren’t what they seem is axiomatic in horror movies. In fact, if you know the Jonestown story, you know what they’ll find and how their visit will end. But unlike most horror movies, and likely against West’s intentions, the suspense here derives not from uncertainty about what will happen, but from wondering if what happens will deviate from well known, real-life events.

This is the danger of basing your movie so heavily on facts. It’s hard to imagine the audience doesn’t know about Jonestown. If they do, the film loses its suspense and surprise. Equally weird: Do the movie’s journalist characters, documenting the cult in the present day, not know about Jonestown? They never reference it, and unless Jonestown didn’t happen in their world, it’s a mindboggling omission.

Even if it didn’t happen in the world of the film, it did in the audience’s, which begs the question: Why retell the Jonestown story as fiction? West’s take on the story is tense, uneasy, and disturbing, but it’s essentially a recitation of history. Because it borrows a surprising number of real details almost verbatim — the look and arrangement of the cabins, Father’s suicide, the death of the compound’s children, the poisoned Kool-Aid, and more — it lacks suspense and lags under the weight of clichés about cults.

West is astute enough about horror that one suspects the clichés must be conditioning the audience so that we’ll be caught off guard by a third-act twist, but the movie is a straight line, no surprises. Instead, the flimsiest of motivations prompts Father to begin the massacre we’ve been expecting. Because we’ve been anticipating a mass suicide since the Jonestown connection became clear, the event is dissonant: both somewhat horrifying and not very affecting. Still, West’s talent shines through in the moments of original horror. The film’s most upsetting scene occurs in Eden Parish’s office as the chaos breaks out. In an almost unbearably long shot, Caroline tries to feed her tied-up brother poison, which he knocks away. Ever the true believer, she injects him instead. All the while, the camera doesn’t move, staying trained on Patrick as he struggles, imploring his sister to save him. Caroline simply hugs him to her chest, soothing his tearful death throes. Many horror movies would have broken the shot, either with edits (not something available to the found-footage style used here) or close-ups. Instead, with the camera not looking away, the audience can’t either, making Patrick’s death and Caroline’s reaction particularly powerful.

It’s a shame that that power isn’t invoked in a more successful film. Ti West’s earlier films weren’t masterpieces, but they were original, and entertained and scared as a result. They were better, not because the use of real historical tragedy in The Sacrament is offensive, but because they forced West to create a fully new story, one whose plot points and scares weren’t already known by the audience. For his next film, here’s hoping West returns fully to fiction and, with it, the surprise and uncertainty that makes horror effective and pleasurable.

Consumption of Culture as Politics