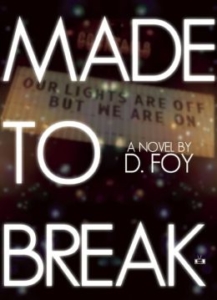 Breathtaking and cataclysmic, Made to Break — D. Foy’s debut — follows the drug-misted, years-overdue reckoning of five friends stranded in a Lake Tahoe cabin on the brink of New Year’s Eve, 1996. The storm that traps these so-called “buddies” begins as a plot device but transforms into an image of the group’s inescapable cage of insecurities, self-doubts, and betrayals. Like an updated take on the claustrophobic dinner party of Albee’s Who’s Afraid of Virginia Woolf?, the novel’s restrictive circumstances force its characters to sit still long enough to let their ghosts reify before them. The drama heightens as it becomes clear that one of the friends will likely die before the storm passes. As the scenery transforms into a “strobic land of bugaboos dreamed and real,” the novel reveals itself as a meditation on masks, deceit, and the catastrophic oneness of glamor and grime. The difference between glitter and grit, Foy reveals, is often merely a trick of the light.

The first thing a reader notices in picking up Made to Break is Foy’s phenomenal prose, which I hesitate to even label as such: the term itself seems too restrictive. Like Joyce, Woolf, McCarthy, and others before him, Foy maintains basic structures of the prose novel while obliterating and reinventing the reader’s notion of what a sentence can do. Made to Break is full of powerful juxtapositions of high and low: crude sex jokes cut against existential epiphanies, and flourish-adorned metaphors abut slangy colloquialisms. Consider:

“On the floor, in a bamboo cage with pits and dung, lay a lovebird dead as wood.

‘Now that,’ Basil said, tapping the cage with his boot, is some weird-ass shit.’”

The two levels are not disparate. Foy’s ear for the cadence of sentences finds the vanishing point between what we often think of as the separate categories of “theme” and “language,” reminding us that such distinctions are artificially imposed in analysis; in the experience, whether of event or of literature, it’s all the same. Foy deploys contractions in such a way as to make the reader wonder whether it is no coincidence that we most often hear them in informal speech and strictly metered poetry, as here: “We just sat there in the cold, and all that giant black seemed to’ve swallowed up the world.” Foy’s close attention to the interplay of sound and sense and narration and dialogue makes Made to Break feel as if it were not written but breathed into being, like an ancient epic.

For this reason, in reflecting on my experience of Made to Break, I’m reticent to use a boring old verb like “read.” I did not read Made to Break: I traversed it; I imbibed it; I rode it, like a wine-dark wave. These ways of speaking are not meant to evoke the tired language of “getting sucked into” a book. Rather, they are meant to convey some approximation of the novel’s vitality. At times this liveliness explodes linguistically in the psychic life of AJ, the novel’s ecstatically aggrieved narrator. Thus we have moments of gasped prose poetry like this one, which comes early in the novel as the narrator reflects on a place his father took him in his childhood:

“At my feet the fledgling sawed away with its little grey beak, gasping and sawing with a relentlessness only its mortality in the offing could afford. Christ but what I would’ve given to flee that place, what meager breath as witness to this struggle I myself could raw, the creature’s eyes watching mine, or rather not watching mine, not watching anything likely.”

Foy carefully tempers the pure linguistic bliss of such Dionysian frenzies with the Apollonian constraints of narrative. The result: a propulsive hum of care, joy, and despair.

I have focused on Foy’s language not because it is the only or even the most remarkable aspect of Made to Break, but because it is a good way into much of the rest of what is so wonderful about the novel. AJ’s first-person narration is brought closer to the reader by Foy’s willingness to stray from conventional confessional sentence structure. This creates a strange intimacy between the reader and all of the characters almost immediately, which empowers Foy to have us care deeply about the friends’ past conflicts and transgressions even when we have not lived with them for long. The language also plunges the reader headfirst into the thorny unity of artifice and reality. An attentive reader cannot help but read the novel’s most beautiful passages without the knowledge that, though they are presented as spontaneous creations of AJ’s mind, and though they feel “immediate” and “real,” they have been meticulously crafted by the author himself. This twoness emphasizes AJ’s obsession with “reality” and “the real” and the group’s struggles with image and appearance, both to each other and the world outside. Late in the novel, AJ admits: “Fakes was what we were, really, every last one of us, and fakery was our game, especially times like these.” He’s right, and not just about this group.

But fakery and reality have a complex relationship: of this Foy seems painfully aware. Perhaps this has something to do with the strange fact that this bewildering work, “non-traditional” though it may be, opens with the gang listening to a band called “Ring Finger” and passing “Bridal Veil Falls” and ends with a marriage. Yet even this image is fraught with symbols of masks: in the novel’s first paragraph, AJ says, “There in the midst of laughter and warmth, an unveiling had begun” — and at the novel’s end, his bride has no veil. It is to Foy’s credit that this reader can do little more than bring these issues to light to begin to ponder them. Made to Break is the opposite of didactic: it is a question, an event, a song. It is the kind of glorious thing that makes one mix one’s metaphors in the struggle to give an account of it.