To Rise Again at a Decent Hour – Joshua Ferris 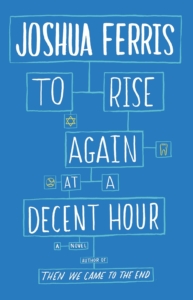 “I was sick to death,” complains Dr. Paul C. O’Rourke, D.D.S., the protagonist of Joshua Ferris’s To Rise Again at a Decent Hour,

. . . of having as my dinner companions Wikipedia, About.com, IMDB, the Zagat guide, Time Out New York, a hundred Tumblrs, the New York Times, and People magazine. Was there not some strange forgotten pleasure in reveling in our ignorance? Couldn’t we just be wrong?

Being wrong is something of a Paul O’Rourke specialty. He’s the type who tells inappropriate jokes to a girlfriend’s uncle who’s sitting shiva. Or breaks into the apartment of an ex until she finds him “on the bed, facedown, crying into her unwashed pillow.” Or distinguishes between being pussy whipped and, as is often the case for Paul, “cunt gripped.”

Perhaps you, too, feel a sense of­ fatigue. This guy again. The misanthropic heart of the so-called “comic novel.” He of affluent white dudedom; he of steady income and an office on Park Avenue; he of condescension toward women; he of proselytizing atheism; he of general malaise. He, by his own admittance, with nothing “urgent to say.”

Somebody masquerading online as Paul C. O’Rourke, however, does have something urgent to say. First an unsanctioned website for Paul’s dental practice mysteriously appears, then a Facebook page, then a Twitter account. All promote a forgotten religion with pseudo-Biblical, increasingly anti-Semitic passages like, “Imagine a people so wretched that they envy the history of the Jews” and “Enough about the 6 million! No more about the 6 million until OUR losses and OUR suffering and OUR history have finally been acknowledged.” So Paul embarks on a mission to track down his imposter, all the while pining for his Jewish ex, Connie, and wrestling with his own existence. Which means readers must dive ever deeper into the black hole that is Dr. Paul C. O’Rourke, where To Rise Again struggles not to drown.

In his inventive first novel, Then We Came to the End, Ferris uses the first-person plural to chronicle office life through an ensemble of disgruntled employees and gossipy coworkers. Plenty of black humor ensues, but so does an underlying sweetness, a sense that community makes the 9 to 5 grind tolerable. Whereas his debut mines comedy from a large cast performing typically drama-free tasks, To Rise Again channels all Ferris’s acerbity into one dull, grouchy dentist.

It’s clear that Paul O’Rourke’s grouchiness and dullness are intentional. That he is white and male and an unlikeable character isn’t an inherent problem. Fans of television’s last decade know that such characters, when approached compassionately, can often be incredibly complex and compelling. Paul is not without potential, but Ferris approaches his protagonist like a kid in a guitar shop who only knows three chords: self-pity, self-loathing, and self-righteousness. As a reader contending with these qualities, it’s difficult to care about any of Paul’s predicaments, even as elements meant to elicit sympathy ­— such as memories of his father’s suicide — creep into the narrative. To push the metaphor a little further: rarely does one lose the sense of Ferris playing Paul, of pulling the strings, of pushing Paul in more sardonic, offensive directions, like a standup who makes a racist joke not because it’s funny, necessarily, but just because he knows it’ll get a rise out of people. In fact, at its indulgent worst, the book sounds not unlike a hacky standup routine:

I’d come out of the bathroom and [Mrs. Convoy, Paul’s dental hygienist] would be standing right there. “I’ve been looking all over for you,” she’d say. “Where have you been?” I’d tell her the obvious, she’d say, “Why must you call it the Thunderbox?” I’d tell her, adding a few details, and she’d grow severe, she’d say, “Please do not refer to what you do in the bathroom as ‘making the pope’s fountain.’”

When it comes to the internet, however, To Rise Again finds a satiric edge. Paul’s argument against “me-machines” is one you’ve heard a thousand times by now: the internet acts like it brings us together, but really pushes us apart. In perhaps the novel’s funniest section, he cuts off his practice’s Wi-Fi, only to have his staff reproach him “with the tragic tone employed to confront a man long harboring a criminal past.” His coworkers insist the internet makes their jobs easier. Paul insists they’re addicted. “I’m doing this for you,” he tells one, “so that you don’t forget God’s world. . . . There [is] no getting out of God’s world and into that other one.”

“That’s a false distinction,” the coworker replies, and she’s right. As Paul’s many social fiascos (“cunt-gripping” and otherwise) illustrate, the only thing blocking Paul’s path to connecting with a woman or a religion (or, say, a reader) is Paul. In this respect, the book acts as an antidote to a film like Her, which accepts wholeheartedly the idea that technology begets isolation. To Rise Again undermines these arguments by putting them in the mouth of a total boob. Through Paul, that dialogue remains fairly black-and-white — this isn’t a book to turn to for solutions — but at least here the novel pushes against the conventional wisdom of internet anxiety. At least here, finally, Ferris has something to say.