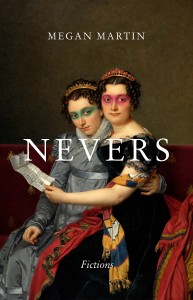 The edges of my copy of Nevers are spiked with white sticky tabs, marking sections in which I can read every inch of my own body, lines that weave into a through-line of meta-something self-awareness, and bits that are in particular fucking cool. Megan Martin, author of Nevers, is Gary Lutz-y in that way that makes for a killer party trick: whip her new collection of fictions open to any page and pick a sentence like a spot on a globe — it will almost guaranteed-ly knock off socks. Look, I’ll do it right now . . . aaand . . . “Today was a new day: I performed tricks balanced on a red ball balanced on a grizzly bear’s back tooth balanced on a pin’s head for gold tokens.” Come on.

I should explain primarily that the reason for my white sticky tabs, a step even above that pretentious pastime of penciling-in-the-margins, is because the package of this slim thing is just astounding and insane and as I read it in my office, I have to shove its cover in the face of each hapless visitor with an exuberant, “LOOK-A-DIS COVER!” I’m trying to keep it pristine, keep it a keepsake. Caketrain routinely kills it cover-wise, and Nevers is no different. It’s cerebral Neoclassicism with this Zorro-cum-Kesha face paint (yes) raccooning two 18th-century Bonaparte sisters, holding a folded letter, a list, perhaps, of NEVERS. Never-have-I-, Never-will-I-, evers. What is on Megan Martin’s list?

Well, she somehow evokes diary entry and blog and tweet and manifesto, all wrapped up in pulsating truth, and yeesh is that exactly the worst description I could possibly give now that I re-read it. I am all a-cringe. But that is the thing with Megan Martin. I am hard-pressed to aptly describe the stun ray gun of this collection without quoting her directly, but endless bullet point quotes does not a review make, and anyway just go buy the book. After I read Nevers I went and bought all of Caketrain’s entire shit for like $60 on paypal. They are not giving me money or even a cool tote for saying so!

Nevers is a landmine of preening and pettiness and tongue-in-cheekiness shaken by little familiar earthquakes — that’s Megan Martin’s m.o. To wit, one “Poetry Pool Party,” transcribed below in its entirety:

I have been invited to a poetry pool party. There will be readings and beer — beer! — and also a diving board!

But what would make anyone want to see a poet’s body? Or the sort of swimsuit a poet would wear?

I am totally going.

Adolescent, sardonic, all-too-relatable, and quickly followed by gut-punching sentences that hit on an even deeper level, like the following, from a chapter sassily titled “How the Novel’s Going”:

At home I prepared a very exquisite suitcase — hard-boiled eggs, sketchbooks, fishnets — and then, crippled by longing for everything else in the room, unpacked it again, returned to my desk.

She is the achingly personal and the deceptively casual shot up with profanity in a way that works, sending heart to throat. In less-capable hands, Nevers’ sometimes-solipsism would verge into eye-roll territory. Tao Lin wishes that he may one day be able to drop Dr. Drew into a story with the same heartbreaking panache as Megan Martin.

True, every so often she lunges into prose a dangerous shade of purple, but manages to catch herself at the last minute with a gasp of self-deprecation and a lurch of immediacy. She whisks away from the Potentially-Too-Precious by casting a snarky side eye on herself and on her book and on publishing, and especially on her peers, poignantly describing the ways in which she would kill her miserable writer friends who get devastatingly hard over Paul Auster. When introducing the pretty bulky metaphor of a glass gondola, she writes around it, looking in at herself, thwarting anticipated criticism: “In the second scene, the gondola got smashed by an iceberg. There is a climax waiting there, but I am not the kind of idiot who believes every ruined thing should be plotted.” She’s got a refreshingly searing view on narrative — if only she’d give this season of Mad Men such sound advice! (Zing!!)

I don’t mind a no-narrative novel — in fact, I love them — but here is a glinting thread of upward motion that runs through these stories: Megan Martin, narrator/writer (much to her dismay), plus her ex, plus her husband, plus her mom and you and Dr. Drew, are all slouching towards Clorox-bleached Apocalypse, a “ruined thing” that she has nevertheless sort of “plotted.” In the final page of Nevers, Nevers is the last book in the world and Megan Martin’s mother is reading romance novels on the internet as we all get pelted to death with tentacled black rocks from heaven.

But then, not really. Of course not really. Megan Martin, boyfriend-haver, recent-Twitterer, caretaker of seven thousand cats in Cincinnati, docent of “millennial” “ennui,” white knight of Probably-This-Prose-Is-Too-Weird-For-Casual-Readers?, mutual hater of the word weird, for it’s a lazy-ass word . . . she has me projecting myself into every cranny of Nevers and shivering. Tao Lin, get on your knees and pray.