Flametti, or the Dandyism of the Poor – Hugo Ball 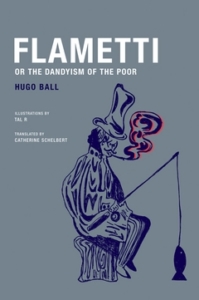 “The word,” Hugo Ball declared at the first Dada soirée in Zurich, 1916, “the word outside your domain, your stuffiness, this laughable impotence, your stupendous smugness, outside all the parrotry of your self-evident limitedness. The word, gentlemen, is a public concern of the first importance.”

We remember Hugo Ball today as a founding Dadaist famous for his sound poems. Sound poetry is sound divorced from meaning, or sound becoming meaning, or sound and meaning together transcending language. Literally, sound poetry is nonsense elevated to literary heights. Theoretically, it is defamiliarization, a radical disruption of the world and the word as we know it.

In contrast, Ball’s novel Flametti, or the Dandyism of the Poor, completed in 1916 at the height of the Dada gatherings at the Cabaret Voltaire, is words, real words, used to produce real, straightforward meanings. In this sense, it is not the Dada we are familiar with. But what words! And what meanings! It is not often I read a novel so enthusiastic and unconstrained (and so funny) in its use of language and in its building of worlds.

The subject of Flametti is the vaudeville circuit in Switzerland in the nineteen-teens. Max Flametti, the protagonist, is the Herr Director of a small band of artistes attempting to scrabble together a living in the gutters and back-alleys of Zurich during the War. It is Flametti’s vision of the world that is most astonishing and delightful. For Flametti the police are “superfluous pests” and “vermin! Lazy, insufferable bums!” The yodeler in his troupe is “one evil, crooked rib.” The pianist is an “abominable woman!”; “A vampire.” Flametti’s wife has hair “pickled in peroxide”; the yodeler delivers “delicious retaliation”; her husband, fork in midair, turns the color of cheese. Flametti’s world is visceral, surprising, and in my experience, laugh-out-loud funny.

For all its humor Flametti is a tragic novel. The novel opens with Flametti, broke yet optimistic, fishing for dinner in the polluted river while prostitutes and schoolchildren look on. Flametti is struggling to find the funds to pay a cohabitation fine. He tries fishing, and he tries drug deals, and finally he returns to vaudeville, seeking success with “The Indians,” his triumphant parody of American history. Flametti looks to America for authenticity and he looks to vaudeville for art; we, in contrast, see cheap costumes and poorly designed sets. Flametti is a novel that believes in art, and that believes in people. But it’s not at all clear why.

Despite their poverty, Flametti’s artistes live decadent lives (hence the “dandyism”), and it is easy to lose sympathy for their position. There is rape; there are drugs; there is war. When Herr Leporello, the frog contortionist, is sent to battle, the eyes of his wife Lydia cling to him “like empty, rain-drenched sunflowers in the fall.” Lydia is known for cruelty and hysterics; she is not known for loving her husband. None of us, as it happens, love her husband. In the same way, perhaps, we are not sorry to see a man guilty of sex crimes tried and convicted.

Nonetheless, here the army, the police, and the press are the enemies of freedom and of creative expression. In a line often quoted in promotional materials, Hugo Ball wrote, “This little novel contains my whole philosophy on 200 pages. Love for those who are on their knees. For the outcasts, the crushed, the tormented.” This is, I think, the great disruption of this novel. Our sympathies, on occasion, may lie with the social systems that impose order and security. And yet it is these systems that are violent, and oppressive, and the bringers of torment.

Flametti, or the Dandyism of the Poor appears in English for the first time this spring in a beautiful edition from Wakefield press. The pointed, hilarious, violent, and nuanced words appear in fluid and eccentric translation by Catherine Schelbert, a translator for Parkett who won a PEN award for this translation (you can read an excerpt here). Schelbert’s prose contains wordplay and poetry; it sparks and dances the plot forward. The volume is illustrated by the Israeli-born, Copenhagen-based artist Tal R, whose original prints offer a hallucinatory interpretation of the novel.

In one of my favorite illustrations, Flametti emerges out of an audience of disembodied heads merged to their top-hats, his own body reduced to cane, pocket watch, epaulets, and enormous Indian headdress. Dadaism has undergone hardships since the days of Hugo Ball. It is has been forgotten; it has been a laughingstock; it has become the stuff of sitcoms and of pop music. In this picture, as in this novel, we are given a nostalgic glimpse back. The scene is from Flametti’s desperate performance of “The Indians,” and it shows him in all of his comic glory: part Delaware chief Fireglow; part stagemaster; part clown. Here Flametti is dignified, and bold, and ambitious. Here Flametti is racist, and sexist, and pitiful. Here Flametti is high, and drunk, and inspired. Here public opinion is with Flametti, and for one brief, laughable moment, he shines.