In 1987, just as they were achieving a level of mainstream recognition, R.E.M. released the single “It’s the End of the World as We Know It (And I Feel Fine).” Two years later, shortly after his 40th birthday, the established recording artist, Billy Joel released “We Didn’t Start the Fire.” On the surface these songs are quite different, emanating as they do from different musical sub-cultures with distinct artistic values. However, although I do not want to reduce the analysis of pop music to words alone, the lyrics of these songs have both striking similarities and telling differences. The verses of both songs list things to do with living through the latter half of the 20th Century: in Joel’s case, events and (public) figures; in R.E.M.’s, the same but with the addition of bromides, media phrases, and conspiratorial theories. I think the relative popularity of these songs can tell us a lot about how mainstream Western society values different epistemologies, or theories of knowledge. To make this point, however, it is necessary to frame the situation within a political perspective implicit in both songs. This perspective speaks to the subject matter of the songs and the tragedy it references — that is, the consequences of “winning” the cold war.

This perspective was most clearly delineated in the 1989 essay “The End of History” (eventually turned into a book), by political scientist Francis Fukuyama, who at the time would have been described as a neo-conservative (his politics have since shifted). The thesis of the essay — that the progression of societal organization in line with the development of human consciousness has come to an end with liberal democracy — has been thoroughly criticized. And it’s been criticized not just by Marxists, unhappy with his appropriation of Hegel to dismiss the idea of a full communist utopia as a historical end-point, but also by counter terrorism hawks and eventually by Fukuyama himself, coming from a post-humanist perspective later in his career.

After the examples and arguments Fukuyama posits as illustrations of the end of history, the final paragraph puts forth this sombre reflection:

The end of history will be a very sad time. The struggle for recognition, the willingness to risk one’s life for a purely abstract goal, the worldwide ideological struggle that called forth daring, courage, imagination, and idealism, will be replaced by economic calculation, the endless solving of technical problems, environmental concerns, and the satisfaction of sophisticated consumer demands . . . there will be neither art nor philosophy, just the perpetual caretaking of the museum of human history. I can feel in myself . . . a powerful nostalgia for the time when history existed. . . . Perhaps this very prospect of centuries of boredom at the end of history will serve to get history started once again.

The way in which Fukuyama downplays the importance of “environmental concerns” for his historical materialist project is problematic, but not surprising given his politics. More interesting is his melancholic nostalgia for grandiose conflict. Gone are the happy-go-lucky days of mutually assured destruction and the risk of tyrannical Marxist-Leninist invasion. These dramatic stand-offs are replaced only with admin. Despite the intellectual elites being allowed to reflect on this loss, the vast majority of the population must not have that same opportunity for wistfulness, or all of the ideas that underpin that society could collapse. This is where the distinction between the epistemologies presented in these two songs appears — in relation to which theories of knowledge our culture privileges as important. On the one hand, Billy Joel presents the supposedly uncontroverted facts of a particular grand narrative, constituting a mainstream, neoliberal “end of history” view. On the other, there is the far more complex and fractured lived experience of those “within” these narratives, presented by R.E.M. In the R.E.M. song, the way information is represented becomes inseparable from how knowledge is constructed. To mainstream politics, this is dangerous because it can call into question the assumptions upon which society is organized. 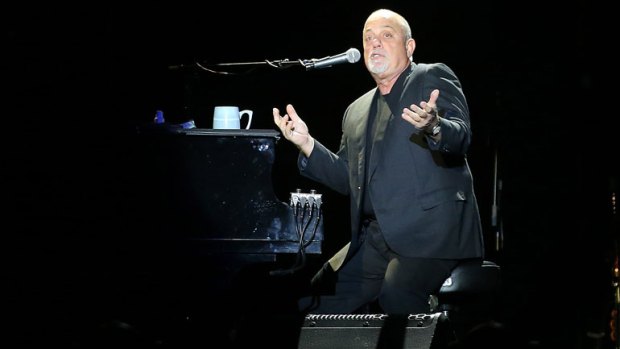 A simplistic positivism is at work to convince us that the facts of the 20th Century have necessarily led the West to its present form of social organization. At the same time, a vital perspective that would allow us to critically reassess the ways in which these facts are presented and observed is being suppressed. This is visible when we consider how Joel has consistently been represented as a wholesome, if bland, entertainer. Whereas R.E.M., even as they mellowed into the mainstream, were still regarded as aloof oddballs. I may have come to this assessment in part via my own prejudices — I would much rather spend time listening to early R.E.M. than Billy Joel — but the argument stands on a close reading of each song’s lyrics and presentation.

Joel’s reflection of the nearly half century prior to his recording is not exactly triumphalist, but it nonetheless exposes itself to this interpretation. Every figure (or product) it refers to has mainstream historical significance and every event is a great event or great tragedy. From the first verse:

These “allusions” (as Wikipedia would claim them to be) could be a pretty rich source for consideration, but are here reduced almost to metadata to be filed under “done.” Indeed, even the rhythm of the delivery of these labels is rapid, clear and regular, as though to afford adequate filing. The chorus (“We Didn’t Start the Fire” etc.) puts distance between Joel’s predominantly baby boomer audience and any culpability for its social reality, while simultaneously arguing for the necessity of what is to follow (“The flames been burning since the worlds been turning”). When Joel yells at the end of the penultimate verse “J.F.K. blown away, what else do I have to say,” the issue of epistemology becomes apparent. The song’s content, having already been given historical significance, justifies the way in which we now live. The video reinforces this: it depicts a sympathetic portrait of living through the cultural shifts of the latter half of the 20th century from the perspective of a couple from the “Greatest Generation” watching the American dream change, and yet remain the same. Joel sits in front of images of various atrocities that are literally burnt into non-existence by “the fire.”

Where Joel tips over into mawkishness, R.E.M. give a more complex version of the experience of living towards the end of the Cold War, i.e. the end of history. Where Joel’s lyrics point towards sense-making, R.E.M.’s inclusion of the meaningless phrases of contemporary media speak and more obscure counter cultural figures complicate the picture of the historical moment by calling into question how that moment is communicated:

That’s great, it starts with an earthquake
Birds and snakes, an aeroplane, and Lenny Bruce is not afraid
[. . .]
And a government for hire and a combat site
[. . .]
You vitriolic, patriotic, slam fight, bright light
Feeling pretty psyched.

Moreover, where Joel’s rhythmic delivery is fast and regular, Michael Stipe’s is far looser. Lines run into each other and emphasis can come at unexpected moments (“an earthquakebirdsandsnakes, an aeroplane”). This unpredictability further draws attention to how these ideas are being presented, rather than suggesting information itself is the sole constituent of knowledge.

The implicit notion of Joel’s song — that the facts speak for themselves and that when put together, even seemingly at random, the picture is of a pretty clear historical imperative for our present social reality — is thrown out by Stipe’s lyrics. When Stipe chooses to sort information arbitrarily, say by the initials L.B. (Leonard Bernstein, Leonid Brezhnev, Lenny Bruce, and Lester Bangs), we get a lot of information, but it is not helpful for meaning-making. Instead we are presented with the myriad levels of nuance and difference that the information and experiences in the song generate. The image of knowledge here is not one that attempts to tell “the story of our time,” but one that embraces the challenge of trying to work out what is meaningful now.

To my final point, R.E.M.’s chorus, “It’s the end of the world as we know it, and I feel fine,” is crucial. It’s not apocalyptic (as the 2012 spike in sales would have you believe), but refers rather to the dramatic changes that may be imperceptible in day-to-day life. It serves almost as a rebuttal to the (at the time unwritten) Fukuyama article. Despite attempts to declare history over for political ends, by approaching how and what we experience in different and defuse ways the new can still be discovered. This may be “the end of the world as we know it” but “I feel fine.” The overarching narrative, referred to as history, is never so simple. Far from the necessity of Joel’s fire, his insistence that that’s “just how it is,” lining up with the mainstream political agenda, R.E.M. present ways to approach information that does not or cannot fit into that agenda. R.E.M.’s video brings out the exciting potential the song opens up. It’s made up of artsy shots of a teenage boy playing with a dog, and the wreckage of an abandoned house with artifacts from what came before. This house is an assortment of relics that are, to him, a fertile resource for interpretation and for the generation of what is to come next.

In 2014, with the supposed zenith of societal organization becoming ever more burdened by contradictions, few still overtly claim history to have ended. However, the associated claims that we live in a “post-ideological age” in which we “are all middle class” and “rational economic actors” are still routinely spouted. What I hope I have shown here, though, is that if we allow ourselves even a slight change of perspective, we can see that not only is history without a social end point, but much of what is taken as fixed and unchangeable can always already be made otherwise.