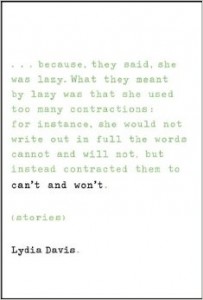 The stories in Lydia Davis’s new collection, Can’t and Won’t, are all marked by this movement: from the ordinary to the strange. Consider the story “Bloomington,” one of the book’s shortest and most perfect; at once a metaphor for and an enactment of this movement, it is a compressed manual for how to read Davis. Here it is in full:

How quickly our eyes pass over these words. Had they been placed in the mouth of a character in a particular situation for which we had some context, we would hardly read them before moving on. But they aren’t. They aren’t part of a narrative; they are that narrative itself, in its entirety. They stand alone, with only the title, the name of a city in Indiana, for company. Through this poverty of meaning — their failure to create a world or even a three-dimensional situation — they take on extra significance, giving us more reason to linger over them, or to let them linger over us. When we do we find that they begin to speak.

It happens to you often enough. You are waiting perhaps for a meeting. You find yourself in an area or a town that is not immediately familiar or unfamiliar, a place that is neutral or indistinct and where you may have been a hundred times in the past, or never before. Nothing is remarkable or memorable; nothing brilliant or terrible. It is normal. Probably these thoughts don’t occur to you, because nothing about your surroundings solicits your attention. But sometimes, for some reason, they do. If you have a little time perhaps you sit on a bench. Perhaps you think: Have I been here before? Now you begin to look, to really look, at your surroundings. You start to notice things, small first, then bigger; idiosyncrasies, quirks of geography and architecture, the peculiar gait of the people around you. Your attention is roused. You look harder, all around. Then it becomes obvious: this place isn’t normal or indistinct or ordinary, least of all boring; it has its own unique character, and a strange one at that. But strangeness — that is the muted strangeness of the everyday; the strangeness that escapes, to paraphrase Blanchot (as Lydia Davis, his most adept translator, often will) — does not immediately reveal itself; it conceals itself in the most ordinary places, and stories. You must take the time to see it, or to let it make itself seen. Only then do you realise that you are somewhere you have never been before.

Perhaps even more so than in previous collections, Davis’s narrators are always solitary, their solitude not overcome, but established through proximity to others. Always loners, they sit and watch the crowd, without access to the tranquilising obviousness that comes from being part of that crowd. The most innocuous gestures become charged with unexplainable menace. Everyday objects shed their familiar skins and reveal hidden plots. It’s as though these things no longer quite form a world, or as though that world is no longer one in which we feel at home. In “The Letter to the Foundation,” a banal exchange between a waitress and customer quickly gives way to uneasy cerebrations as the prosaic forms the scene of the existential.

I realized I could just as easily not have witnessed this scene, if I had chosen to stay in the bus station. . . . It would still have taken place. . . . And then, I had a stranger and less pleasant thought: not only was I not necessary to those scenes, and not necessary to those lives that continued to go on without me, but in fact, I was not necessary at all. I didn’t have to exist.

Davis’s narrators are almost always in midst of some essentially normal situation, but unable to integrate that situation into the familiar world of the social throng. Instead her stories linger on the threshold of that world, exposing its artifice. This liminal, self-enclosed and yet outward looking perspective would seem to be the position of the writer. And yet, Davis is too intelligent by half to stray into any writerly heroics. The writer doesn’t have any privileged access to some deeper truth of things. Far from it: writing is referred to as a deeply suspect activity — at once treacherous (“Two Characters in a Paragraph”) and evasive (“Writing”). Rather, the detached, analytical and incisive perspective that Davis’s narratives open is simply another perspective on a world that is infinitely amenable, interpretable, ambiguous. Davis awakens the multiplicity of meanings; she doesn’t settle on new ones. To read her is to be like Josef K. in the cathedral, cast in light that’s dim and getting dimmer. Before long you can’t see at all, as you fumble your way toward the exit. The simple story loses its shape.

Davis has a particularly acute eye for the contracted violence, imbalances of power, and stirrings of ressentiment implicit in prosaic social relations, brilliantly and economically captured in stories like “My Sister and the Queen of England,” “Negative Emotions,” “The Gold Digger of Goldfield,” and “The Dreadful Mucumas.” From the latter, look at this disquieting description of two maids and note how that final word — usually a term of endearment — resonates so disturbingly.

They came with the apartment which we are subletting. They were bargains because of Adela’s low IQ. She is a scatterbrain.

Another major theme is loss. “Awake in the Night” is marked by a melancholy ambivalence, whereas “The Seals,” a longer piece about a woman struggling to understand the loss of her sister and father, perfectly captures the experience of mourning in all its contradictions.

There was also some confusion in my mind, in the months afterwards. It was not that I thought she was still alive. But at the same time I couldn’t believe that she was actually gone. Suddenly the choice wasn’t so simple: either alive or not alive. It was as though not being alive did not have to mean she was dead, as though there were some third possibility.

Davis gives voice to those inchoate mumblings, to those thoughts that half-form in our minds before collapsing under the weight of their own aporia and, with craft and care she follows them through their manifold turns and folds. And all this in prose that is stark, limpid, precise and quietly beautiful. (Hannah Arendt famously said of Kafka that he has no favourite words. The same is surely true of Lydia Davis.) Her stories give expression to the pit in the plum; the madness implicit in the quotidian. Like half-forgotten dreams, they linger somewhere between the alien and the familiar, the unreal and the hyper-real. At once uncomfortable, painful and compulsive, reading Lydia Davis is like looking into a mirror held too close to one’s face; you can’t bear to look, nor to look away.

Will Rees lives in London. His writing has appeared in several magazines. He is taller than you might think.

A Dream of a Woman – Casey Plett