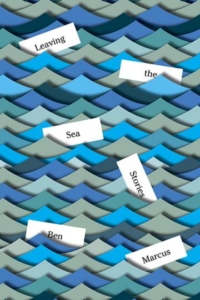 As Full Stop contributor David Burr Gerrard noted in the introduction to his recent interview with Ben Marcus, his former teacher, Marcus is not only “one of America’s foremost practitioners of experimental fiction,” but also “one of America’s foremost pugilists of experimental fiction.” Given Marcus’ reputation as both a defender of the experimental and as a literary auteur himself, the opening story of Leaving the Sea, his new collection of short stories, is initially puzzling. “What Have You Done?” is an aching portrait of a man’s inability to repair his relationship with his family after years of abuse and lies, evoked by subdued, contemplative prose. That is to say, it is a realist story, and it is far from the only one: more than a third of the collection’s fifteen pieces could be reasonably called “traditional stories.”

But that leaves much of the collection unaccounted for. Leaving the Sea finds Marcus exhibiting the full scope of his stylistic range. The stories range from straightforward narratives to lyrical soliloquies to surrealist mini-epics. Such diversity, in the hands of a lesser writer, might result in a fractured, aimless failure. But in Leaving the Sea, the pieces’ stylistic disparities cut against each other in a harsh, dissonant beauty. The range of structures and registers allows Marcus to explore his themes from strange, conflicting angles, lending the collection a power far greater than any of its parts. As a result, despite its formal heterogeneity, Leaving the Sea stands among the most cohesive story collections in recent memory.

Leaving the Sea is divided into six sections, the first of which contains four of the most traditional pieces. “What Have You Done?” introduces Leaving the Sea’s central concern with three of the most fraught, complex human relationships: with one’s lover, with one’s family, and with one’s own body. Paul, the story’s pathetic yet sympathetic antihero, embodies these struggles as he comes home for a family reunion to finally tell his family about his wife and son, only to find that, based on a tragic history of which the reader learns little, they do not believe a word of it. Paul, like nearly all of the collection’s central characters, is overweight and ashamed of his body, as well as his sexual urges. “What Have You Done?” thus innocuously establishes the narrative at the collection’s core: the desperate, lonely man unable to find solace in his loved ones, his body, or his own tormented soul.

In the first section’s second story, “I Can Say Many Nice Things,” Marcus continues to develop the themes introduced in “What Have You Done?” while subtly beginning to undermine the realist style that governs much of the collection. “I Can Say Many Nice Things” is the bitingly funny story of Fleming, a creative writing professor who, wary of poor student evaluations and his lack of enthusiasm for university service, volunteers to teach a credit class aboard a cruise ship, far from his disinterested wife and ill-tempered daughter. Though realist in style, the story’s conceit allows it to engage in gentle mocking of tropes of the traditional short story. Early in the story, the protagonist considers the tragic irony of how the cruise ship’s welcome packet has earned a wider and more engaged audience than “his sober, sentimental inventions of domestic lives he’d never lived.”

The satire continues in the description of a workshop participant’s piece: “In Timothy’s story an old man sat on a bed and thought back on his life, which featured some activities he regretted, which he would now tell us about in great length. The end.” In a more incisive and deeper critique, Fleming spoofs the age-old mimetic theory of art and its distant offspring, the criterion of “believability” in fiction. After one student admits that she “had trouble believing” another student’s story, Fleming reflects: “That did rather sum things up . . . Sort of a brave piece of thinking. Maybe true of almost everything created ever: paintings, books, houses, bridges, certain people. None of them are finally believable, when you really think about it. But, well, there they are.” These subtle self-subversions inflect the reader’s attitude toward the story, as well as toward the remaining stories in the first section. Marcus thus creates an atmosphere in which his flirtations with realism stand on their own while still keeping the reader cognizant of questions inherent in the style’s history and aims.

Marcus’ trademark experimentation comes to the fore in the collection’s second section, which contains two surrealistic, dystopian pieces, each in interview format, concerning a man who seeks a permanent state of infantilism and one who abandons his family for a subterranean dwelling which he sees as the only route to survival. The collection pivots back to realism for the duration of the third section’s two stories, but these tales of sons struggling to care for their aging parents are, by juxtaposition, infused with grave foreboding.

Leaving the Sea collapses completely into experimentalism in the six stories that constitute the collection’s fourth and fifth sections. In these apocalyptic tales of thwarted love and family strife, the play of language, image, and rhythm overrules the logic of narrative that governs the collection’s more traditional pieces; or, to speak more exactly, this new structure, in taking over the role of what we traditionally understand as narrative, reveals that the word “story” might have many stranger reverberations than those of which we most often think. Even at the sentence level, the logic of sound, which is so essential to poetry but often overlooked in even the most accomplished prose, takes control. One such line in “The Father Costume” goes, “It was moist that morning, rimmed with foaming soil, so my father fitted the mouth with scraps of linen and then reached his arm deep into the hole.”

In these stories, Marcus makes frequent use of a characteristic device, his strange and marvelous redefinitions, which read like metaphors that contain their own strange, mythic histories: in “Origins of the Family,” we find a “bone hollow called a mouth”; in “Against Attachment,” “splotches of ink called shadows,” “[g]raves . . . called homes,” and “[r]otten bags . . . called people.” By these and other similar means, Marcus creates word-worlds of inimitable beauty, strangeness, and darkness. In these dark, lyrical landscapes, Marcus refigures and re-imagines the themes of the human struggle with love, family, and the body first introduced in the earlier, more traditional narratives.

The collection culminates in its sixth section with the final story, “The Moors,” a novella-length piece in which Marcus evokes a self-deprecating lab worker’s odyssey to join a co-worker at the coffee cart in an epic, meandering register. This story, a dark and searching rumination on human connection, unites well-crafted narrative realism with linguistic fireworks as it plumbs the darkest depths of the whole collection. The sequencing of the stories is perfect: Leaving the Sea, in its organic development, teaches the reader how to read it. When it’s over, the reader is left exhausted yet eager for more, and blessed with an enriched understanding of what a gift the endlessly inventive and imaginative Marcus is to contemporary literature.