How to Talk about Climate Change, Part 2: Uncertainty, Present and Future

This is the second of three posts in which Stephanie Bernhard discusses the barriers climate change presents to communication and how these barriers prevent people and governments from focusing their attentions on this crucial issue. The three main themes are blame, uncertainty, and economic and racial injustice. 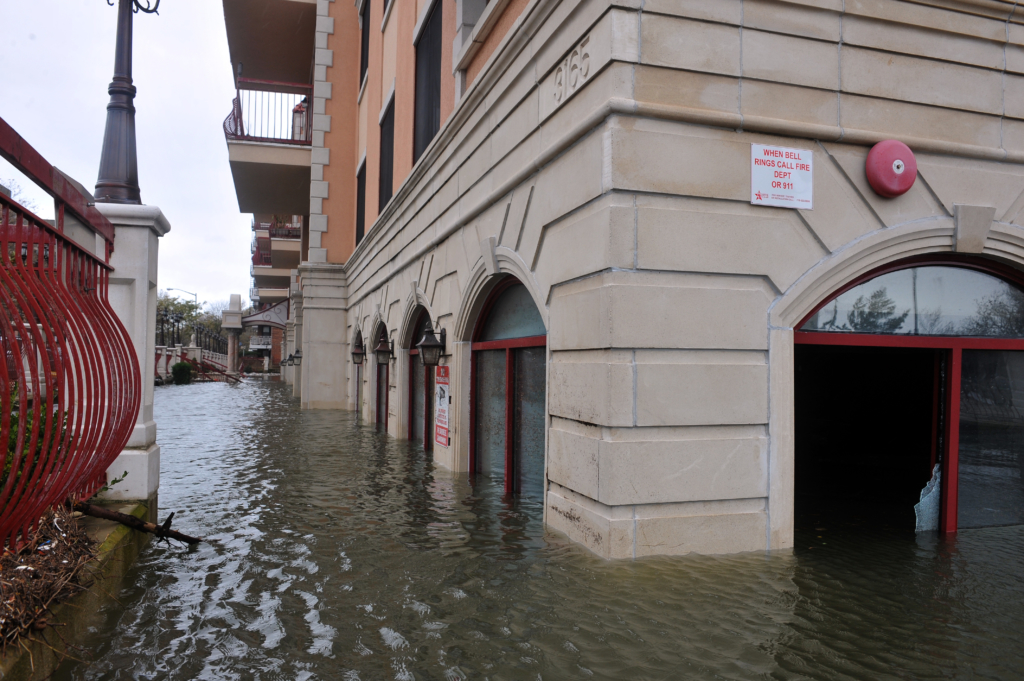 Seriouse flooding in the buildings at the Sheapsheadbay neighborhood due to impact from Hurricane Sandy in Brooklyn, New York, U.S., on Tuesday, October 30, 2012. Anton Oparin / Shutterstock

My composition students have great imaginations. They have a habit of starting their papers for my class on writing and talking about climate change with a paragraph of truly epic imagery. When they do, they tend to take one of two tones. Some of them sound like this:

“Picture a world a hundred years from now. The major East Coast cities will be underwater, and Charlottesville will be a seaside town. The summers will be so hot that you can’t go outside without collapsing, and winter will be a distant memory.”

“How can people ignore the signs of climate change all around us? The seas are rising, droughts are increasing in frequency, and ever-stronger hurricanes are devastating our cities.”

Both sets of writers are relying on dramatic weather images to hook their readers. But one set is writing in the future tense, the other in the present tense. I wonder: when we talk about climate change with the intent to change people’s behavior, is it more effective to talk about weather events that will happen in the future, or events happening now?

The answer is quite complicated, and  — as in the case of whether to use blame in the climate debate, which I discussed last week — depends entirely on the situation.

Generally speaking, describing present and future weather events works better for talking about climate strategies in the long term than in the short term. Last week, I mentioned attending a talk at which activist Tom Steyer claimed the three best ways to change people’s minds about climate change are to emphasize green job creation, decry adverse health effects related to fossil fuels, and portray evil corporations as out to get the little guy. Describing weather events — present or future — doesn’t even enter Steyer’s equation. In the Q&A session, I asked him why. Why wouldn’t delineating the effects of climate change rank among the most important tactics for convincing people that it’s a problem?

I should have anticipated his response: his primary goal, he said, was to influence voters in time for an election — an extremely narrow window. Most people can’t internalize such dramatic images, or change their understanding of the world drastically enough to account for the awful realities of climate change in just a few months. Imagining and recognizing climate crises is important, of course, but its role in the short-term political fight is negligible.

But concerned climate scientists, and the journalists and activists who follow their lead, need to be thinking toward the long game as well as the short. Climate change is not going away any time soon: we are at the very beginning of a long war. I use the word “war” guardedly, but intentionally. None other suffices to describe the centuries of struggle that await us — struggle against the weather, against carbon pollution, against the instincts of those rational economic beings we call “humans,” who never tire of proving their commitment to achieving immediate satisfaction at the cost of future security. The climate concerned can’t afford to depend on short-term success any more than the rest of the population. And in the long term, repeatedly showing images of a climate-changed world might change the way people think.

Andrew Revkin, a climate blogger for The New York Times, has thought a lot about climate change communication generally, and specifically about how best to present weather images to a skeptical public. In one important post, Revkin argues that describing and explaining predictions for the future climate is a more effective rhetorical tool than linking individual contemporary weather events to anthropogenic climate change.

Predictions about the future effects of carbon dioxide on the climate, he reasons, are ironclad, referring to the oft-cited “97 percent” of scientists who think that climate change is real and caused by humans. Climate scientists can pretty easily provide evidence to shut down the deniers who claim the whole issue is a hoax. They are much less willing — far less willing than journalists, in fact — to link individual weather events to climate change. In other words, they don’t like to say a drought or a hurricane happened “because” of climate change. World weather systems are simply too complex for scientists to banish uncertainty and proclaim climate change as a primary cause of a given hurricane, drought, or flood. The future, paradoxically, is clear, while the present is uncertain.

And uncertainty, Revkin claims, is a foot in the door for deniers, who use it to discredit all the work that scientists do on climate change (and many other issues — see Rachel Aviv’s mind-boggling story on Syngenta’s attempt to discredit one scientist for showing that its product could have adverse effects). On the climate front, deniers recently went to town claiming that the polar vortex disproved all climate science. It’s a tactic they whip out pretty much every time the temperature dips below freezing. (Below freezing in the states, that is; they conveniently forget about the weather the rest of the world is experiencing — think epic floods in Britain and withering heat in Australia, at the moment. And the polar vortex might be tied to climate change anyway.)

Scientists can laugh off the crazies, but they have a harder time fighting back against charges of uncertainty. They were more or less united in saying that climate change might have strengthened Hurricane Sandy, for example, but no one would say increased levels of atmospheric carbon dioxide caused the storm. So there is a lot of heft to Revkin’s argument that we should emphasize future, yet reliable, climate predictions over present but uncertain predictions. Certainly campaigns like 350.org’s “Climate Change Name Game,” which re-names major hurricanes after climate-denying (read: Republican) politicians, are ill-advised. Not only do they further politicize an issue that ought to be equally urgent to members of all political parties, but they also make assumptions about current weather events to which even climate-concerned scientists won’t commit. They essentially demand skeptics’ scorn.

What I take away from Revkin’s analysis is that when you are talking (or writing) to people who are likely to be skeptical about climate, you are probably better off explaining the scientific vision of the future than relying on present-day analysis. But there’s another side to the issue: what happens when you talk to people whose experience with present day weather might make them more susceptible to concern about climate change? We already know that short-term perceptions play a huge role in determining attitudes toward climate change: it is common knowledge by now that people are more likely to take climate change seriously if they’re sitting in a hot room than if they are sitting in a cold one. Thus the deniers’ gleeful squeals about all the snow we’re getting. In, you know, winter.

By this same token, it should follow that people living in areas that have recently experienced potentially climate-related weather disasters are more likely to believe that climate change is real and urgent. And it does follow: a number of recent studies have shown that survivors of weather disasters are more willing to engage in sustainable behaviors. We saw this after Sandy, when then-mayor of New York Michael Bloomberg suddenly doubled down on the eco-friendly message. And recently, the eco-sphere has been gushing about the story of Greensburg, Kansas, a tiny rural town that was destroyed by an unusually strong tornado in 2007. Greensburg’s Republican mayor led the heavily conservative town in an effort to rebuild sustainably, to power the town with wind energy and earn LEED certification for its municipal buildings. Today, Greensburg is a paragon of rural sustainability. And I’ll bet that its citizens, having been through a tornado, were much more open to eco-conscious building than they would have been if the town had been destroyed by a climate-neutral event, like a fire.

Test cases like these suggest that linking current weather to climate change can be useful when trying to persuade people who have experienced weather trauma. Emphasizing present and local effects might even work better than stressing the future. I defer again to my composition students, who, when we read articles about climate change effects in Virginia, sometimes say that they feel strongly about the scary descriptions of their home state, but they worry that non-Virginians just wouldn’t care. Likewise, when we read articles about other places they claim to empathize, but feel less energized to act than when they read about places they know well.

That’s just how humans are. We care more about what’s happening here and now. Climate scientists, journalists, and activists certainly need to make sure that people understand we will be dealing with climate change for a long, long time — beyond our lifetimes and our grandchildren’s lifetimes. But we also have to adapt the climate conversation to the way our minds work, and sometimes that means accepting that mysterious tornado as evidence of climate change. The storm only lasted a few minutes, but those wind turbines in Kansas will keep carbon out of the air for a long time to come.